By now, hopefully, our readers know something of the Old School – New School Division in the Presbyterian Church in the 1830’s in our nation. The Plan of Union with the Congregational Church, which had been entered into in 1801 was abrogated in 1837.  A key leader of the New School Presbyterian branch was the Rev. Albert Barnes. 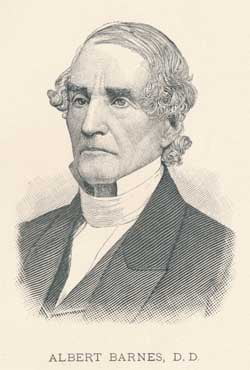 To his credit, Albert Barnes also worked for the abolition of slavery and on behalf of the Temperance crusade. He would have eye problems near the end of his ministry in Philadelphia, and he died in 1870. Before he died, the Old School and New School re-united, though the reunion was opposed by his former professors from Princeton Seminary.

A friend who knew him well observed that James never wrote out his name in full. It wasn’t that he disliked his name, but that he was scrupulously modest. For you see, his father—the Rev. Dr. Matthew Wilson—was not only a noted surgeon and pastor, but also a decided republican patriot. And so when his son was born on February 21 in 1769, he named him James Patriot Wilson.

James grew to become an excellent student, graduating with honors from the University of Pennsylvania. He then devoted himself to the study of law and was admitted to the bar in 1790. But the death of his first wife and the assassination of his brother before his eyes turned his focus to eternal matters.  Convinced of the truth of the Gospel, he then pursued the ministry and was ordained in 1804 and installed as pastor in Lewes, Delaware. In 1806, he became pastor of the First Presbyterian church of Philadelphia, and remained pastor of this church until his death in 1830.

Several men answered William B. Sprague’s request for accounts of James Patriot Wilson’s life and ministry. Albert Barnes, who succeeded Wilson as pastor, wrote in reflection on Wilson as a preacher:

“On the only occasion on which I ever heard him preach, several circumstances struck me as remarkable. His personal appearance was very impressive and solemn. He was very pale and apparently feeble. He sat in the pulpit, and as he was accustomed to do, used a large fan. He had a very dignified air, and his whole manner was calm, collected, and solemn.

“What first arrested my attention particularly in his pulpit performances, was the manner in which he read the Scriptures. It was a chapter in the Gospel by John. His reading was accompanied by brief explanatory remarks,—I thought the most clear and interesting exposition of the Bible that I had ever witnessed. It was so simple, so plain, so striking, that at the time it occurred to me that he could better prepare a Commentary for the use of Sunday Schools, than any man I had ever met with.

“His sermon was equally clear, impressive and solemn, and what was most remarkable about it, was a very clear and beautiful exposition of the ninth chapter of the Epistle to the Hebrews, which he quoted from memory, and commented on as accurately as if he had had the passage before him. He used no notes of any kind. His preaching at first seemed to be merely conversational. He sat and talked to the people before him, as a gentleman might be expected to do in his own parlor.

“Soon, however, I forgot entirely the man—his fan, his sitting, and his somewhat singular habit of lifting up and down his watch chain; when, for a moment, he laid down his fan, and I became wholly absorbed in what he was saying, and to me it was then of no importance what he was doing, or whether he made many gestures or none. I have never in my life found myself more absorbed in the subject on which a public speaker was discoursing, than I was on that occasion. And what was true of myself seemed to be true of the entire congregation.”

Words to Live By: Many speakers can hold the attention of a crowd, but when God truly calls a pastor to preach the Gospel, the power of the message resides not in the man, but in the Holy Spirit who works sovereignly upon the hearts of sinners.
“For the preaching of the cross is to them that perish foolishness; but unto us which are saved it is the power of God.” (1 Cor. 1:18)

Image source: Frontispiece portrait from An Essay on the Probation of Fallen Men: or, The Scheme of Salvation, founded in Sovereignty and Demonstrative of Justice, by James Patriot Wilson. Philadelphia: Printed by William F. Geddes, 1827. Image scan prepared by the staff of the PCA Historical Center.