29 April, 2015 in Uncategorized by archivist | No comments

A Casualty of D-Day

The following account comes from THE INDEPENDENT BOARD BULLETIN, Vol. 10, no. 10 (October 1944): 4-7. This was (and is) the newsletter of the Independent Board for Presbyterian Foreign Missions. 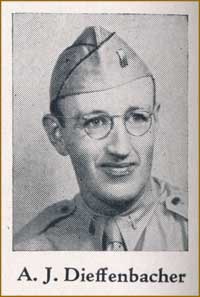 In the falling of the Reverend Arthur Johnston Dieffenbacher on the battlefields of Normandy, July 5, 1944, the Independent Board for Presbyterian Foreign Missions has lost its first and one of its best missionaries by death. Few details are known even at this writing but in Arthur Dieffenbacher’s passing his family, the Board, China and a host of friends have sustained a very great loss; yet we know that God’s people should view all things from the standpoint of eternity and therefore we can rest assured that God Who knows all things “doeth all things well.”

Arthur Dieffenbacher was born in Titusville, Pa., April 29, 1909; and thus was but a little over thirty-five years of age when the Lord called him home. His early years were spent at Erie, Pa. where he was graduated from high school at the early age of fifteen. Two years of college work at Erie followed, and two years later in 1927 he was graduated from Grove City College. In 1931 he finished his theological education at Dallas Theological Seminary, with a Master’s degree in his possession and also credit toward a post-graduate Doctor’s degree. He had proved himself precocious during his school days, but he was also in advance of his years in the things of the Lord, his deep interest in these things showing itself, for instance, in his spending the first night of his college life away from home in a prayer meeting with a group which was destined to aid him greatly to the clear insight into God’s word which his later years so fully exhibited.

In September, 1932, Mr. Dieffenbacher was appointed a missionary of the China Inland Mission and in company with his intimate friend John Stam, who himself was destined to become a martyr, soon left for China. There, after language study and a brief period of work in Changteh, Hunan Province, he met in 1934 Miss Junia White, daughter of Dr. Hugh W. White, editor of The China Fundamentalist. Miss White and he were soon engaged, but because of illness and other causes they were not married until June 1938, joining at about the same time also and with the good wishes of the China Inland Mission, the Independent Board for Presbyterian Foreign Missions with the principles and purposes of which both were in full sympathy. 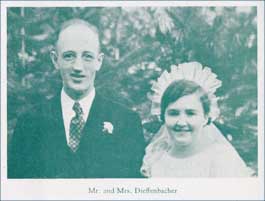 All the years spent in China were filled with adventure which included a flight from Chinese communists in 1935; and the summer of 1938 saw battles raging all around Kuling where Miss White and Mr. Dieffenbacher had been married. Indeed China had been engaged for a whole year then in the war which was to engulf eventually so many lands and was, for Arthur Dieffenbacher, to end so tragically upon the battlefields of Nor­mandy. On their way from Kuling this young bride and groom had to pass through the battle zone, just behind the fighting lines, but God gave them protection and enabled Arthur even then to point a sore-wounded and dying Chinese lad, a soldier, to Christ as the Lamb of God who was slain for our sins.

This trip led to Harbin, Manchuria, the “Manchukuo” of the Japa­nese, where two years of happy, fruitful work ensued, years which saw the beginning of what despite the hardness of the soil of that great cos­mopolitan city might have developed into a much greater work had it not been for the tyranny of Japan and the war which was so soon to bring to an end so much Christian work both in the Japanese empire and in China. In the testings of those years in regard to Shinto and the Japanese demands upon Christians Arthur and his wife remained faithful.

In the summer of 1940, after eight years in China, Mr. Dieffenbacher returned to America with his wife on furlough. There on June 19, 1941, a little daughter, Sara Junia, was born. As war conditions were gradually spreading it was thought that Mr. Dieffenbacher ought to return alone to Manchuria and so passport and passage were obtained but ere he could sail the events of December 7, 1941, compelled all such plans to be abandoned for the time being, and as it proved in Arthur’s case, forever.

In America Mr. Dieffenbacher proved to be a good and effective mis­sionary speaker. He also rendered efficient aid at his Board’s headquarters in Philadelphia. Later he held a brief pastorate in the Bible Presbyterian Church of Cincinnati, Ohio. But when the American Council of Christian Churches obtained for its member Churches a quota of Army chaplaincies, Mr. Dieffenbacher applied for a chaplaincy and was appointed and joined the Army on July 18, 1943.

In the Army Arthur Dieffenbacher won recognition for two things. For one, he took with his men, for example, the whole system of training including the dangerous and difficult “infiltration” course and other things which were not required of chaplains, but which he did that by all means he might win some. This ambition to win men to Christ was the second notable trait of which we speak. Indeed it showed itself not alone while he was in the Army but also throughout all his life. He always preached to convince, convert and win. On his way to England with his unit he with two other God-fearing chaplains, won eighty-four men to Christ. A brief letter home, mentioning this asked, “Isn’t that great?” Truly it was great and not merely in the opinion of his friends, we believe, but also in the sight of the Lord. Some of his friends are praying that from among those eighty-four after the war some may volunteer to take Arthur Dieffenbacher’s place in China. God is able to bring such things to pass.

The time from April to June 24, 1944, was spent in England. There, too, Arthur Dieffenbacher was constantly on the search for souls and also for that which would bring inspiration to his men and to his family and friends at home. Some of the poems he found and sent home testify at once to his love for good poetry and for the things of the spirit, especially for the things of the Lord. He believed thoroughly that he was in God’s will. He longed to see his wife and child and mother again but assured them that “no good thing would the Lord withhold from them that walk uprightly.” He rejoiced in full houses of soldiers to whom to preach the Gospel of salvation. He was often tired after a long day of duties done, but preached and lived that we are “More than Conquerors” through Christ. With it all he learned to sew on buttons and patches and to wash his own clothes and his good humor bubbled over into his letters when he said, “Oh, boy, you should see the result!” Up at the front large at­tendances at services were the rule, men searching for help, for strength, for God, as they faced the foe. Perhaps a premonition was felt of what was to come. He wrote, “There are so many chances of getting hurt in war or in peace that which one affects you is by God’s permission. Hence I don’t worry, but take all reasonable precautions and trust the rest to God. His will is best and His protection sufficient.” On July 3, he wondered how they would celebrate the Fourth, and knew not that on the morrow of that day he would celebrate humbly but joyfully in the Presence of God. When killed by German artillery fire his body was recovered by his senior chaplain, Chaplain Blitch, and later an impressive funeral service was held.

Words to Live By:
“Faithful unto death” are words which characterized the whole life of Arthur Dieffenbacher. The realization of that fact brings an added meas­ure of consolation to his mother, Mrs. Mildred J. Dieffenbacher, to his wife and will, in time, to his little three-year-old daughter as she comes to understand what her father was and what he did. It brings consolation also to The Independent Board for Presbyterian Foreign Missions and to all his friends. But as Arthur Dieffenbacher himself would have been the first to say, all he was and did he owed to Christ in whom he was called, chosen and empowered and made faithful till that day when surely he heard the welcome “well done, good and faithful servant, enter thou into the joy of thy Lord.”