December 10: Covenanters in the Crown of London

The story of the Covenanters defeated at Bothwell Bridge and sent aboard the Crown of London as slaves is a sobering story. There are pictures on the web of the monument on the coast of Orkney near the sea as well as the Covenanter Fountain in Kirkland.

Covenanters in the Crown of London

Following the disastrous Battle at Bothwell Bridge on June 22, 1679, in which Covenanters were defeated in the battle, close to 1200 Covenanter prisoners were taken to Edinburgh and imprisoned in a make shift, open air prison next to Greyfriars Kirk (church). Some were tortured and killed immediately. Others died of natural conditions due to the harsh conditions of the site. Others were pardoned and set free under the August 14th Act of Indemnity that same year. But our attention today focuses in on the approximately 257 alleged ringleaders, including Covenanter ministers, who were sentenced to be shipped to the West Indies or Virginia as white slaves. Setting sail from Leith, Scotland, on the prison ship, Crown of London, on November 27, 1679, they sailed only a short while before bad weather forced them into a port.

Despite warnings from the locals to not attempt to sail, they had hardly cleared the land mass when the ship lost its anchor on December 10, 1679, striking rocks off of Dearness.The captain, Thomas Teddico, described as a profane, cruel wretch, ordered the crew to escape by chopping down the mast and riding it to the shore. The prisoners in the hold, who had their hatches chained to prevent them from escaping, were left to their own straits. All of them perished, with the exception of around 50 who were enabled to escape by means of a ax which one prisoner had with him. During  the next several days, bodies of the dead prisoners washed up at the beaches, and subsequently were buried in the area.

Of those who managed to escape, six prisoners were caught and shipped to the Barbados as slaves. Eight other Covenanters were shipped to the English plantations in Virginia. Some escaped to Ulster. At least two families in the port area claimed to be descended from a few Covenanters who stayed where they landed. 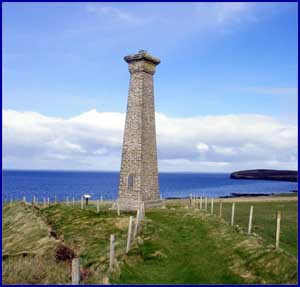 On August 22, 1888, a majestic granite monument [pictured at right] was erected about 300 yards from the spot where the Crown of London went down. It has the following memorial etched on its side: “Erected by public subscription to the memory of 200 Covenanters who were taken prisoner at Bothwell Bridge and sentenced to transportation for life, but who perished by shipwreck near this spot, 10th December 1679.” Another memorial is found in nearby Kirkwall and is known as the Covenanter Water Fountain, built just two years later in 1890 due to excess funds left over from the original monument.

Words to Live By:
Our spiritual forefathers suffered much for the Savior in their battles to win the Reformation. They deserve to be remembered by all Presbyterians everywhere for their sacrifices for the kingdom of Christ. In  so remembering, you the reader may be informed that black African slaves were not the only ones shipped to these shores. White slaves — Covenanter slaves — also were sent to our shores. Don’t forget their sacrifices. Remember their sacrifices as we approach the coming year.