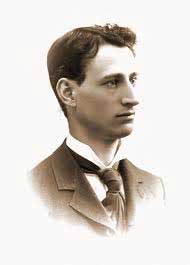 When the author of these historical vignettes was studying for his Doctorate of Ministry degree at Covenant Theological Seminary in St. Louis, Missouri, one of the assignments was to read the first seventy-five pages of Geerhardus Vos’s book on Biblical Theology.  This should be a snap, I thought.  Only seventy-five pages of a large treatise.  It was one of my most difficult assignments ever, as Dr. Vos used complex theological words which only a theological  dictionary, my constant companion, would define. So it was slow going all the way through. In frustration I called my father, who had studied under Dr. Vos at Princeton  Seminary in 1929, hoping to receive some comfort about this assigned book. I received none from my dad.  His response was that I didn’t have to sit under Dr. Vos and interpret his “thick Dutch accent” while taking notes, so be thankful for small blessings! 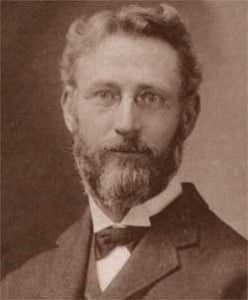 Born this day, March 14, 1862, in Heerenveen, The Netherlands, Geerhardus Vos grew to become one of the finest and yet one of the last examples of the old Princeton theology. Immigrating to the United States in 1881 when his father answered a call to serve as pastor of a church in Grand Rapids, young Vos prepared for the ministry first at the Christian Reformed Seminary in Grand Rapids and then at the Princeton Theological Seminary, before taking his doctoral studies in Berlin and Strassburg.  After about five years teaching at the Seminary in Grand Rapids, he was named as the first Professor of Biblical Theology at the Princeton Theological Seminary, taking that post in 1893 and serving there until retirement at the age of 70, in 1932.

When Princeton Seminary was reorganized and modernists put in positions of authority over the Seminary, Vos was within three years of retirement. He chose to remain rather than follow Robert Dick Wilson and J. Gresham Machen as they founded Westminster Theological Seminary. Nonetheless, his convictions were with those faithful men, and upon his retirement in 1932, he left an impressive portion of his library to Westminster.

His theological works were numerous and interest in his work has only grown through the years. Sadly, few publications noted his death in August of 1949, one notable exception being the September 1949 issue of The Presbyterian Guardian (see page 164). James T. Dennison, Jr. has written a brief biography of Dr. Vos, originally published in Kerux and made available here.  Dr. Richard Gaffin has judged that Vos made his greatest contributions with his work on the kingdom teaching of Jesus [The Teaching of Jesus Concerning the Kingdom of God and the Church (1903)] and the theology of Paul [The Pauline Eschatology (1930)]. Just remember, that thick Dutch accent went down on paper (so to speak), and his writings are often challenging to read, but always worth the time.

His wife, Catherine Vos, was notable in her own right, particularly as the author ofThe Child’s Story Bible. She preceded him in death by some twelve years.

Words to Live By: An excerpt from “Jeremiah’s Plaint and Its Answer,” by Dr. Geerhardus Vos (1928)

“In taking the comfort of the prophetic promises to our hearts we do not, perhaps, always realize what after the tempests and tumults, in the brief seasons of clear shining which God interposed, such relief must have meant to the prophets themselves. For they had not merely to pass through the distress of the present; besides this they were not allowed to avert their eyes from the terrifying vision of the latter days. In anticipation they drank from the cup “with wine of reeling” filled by Jehovah’s hand. Nor did the prophets see only the turbulent surface, the foaming upper waves of the inrushing flood, their eyes were opened to the religious and moral terrors underneath. The prophetic agony was no less spiritual than physical; it battled with the sin of Israel and the wrath of God, and these were even more dreadful realities than hostile invasion or collapse of the state or captivity for the remnant. In a sense which made them true types of Christ the prophets bore the unfaithfulness of the people on their hearts. As Jesus had a sorrowful acquaintance with the spirit no less than the body of the cross, so they were led to explore the deeper meaning of the judgment to enter recesses of its pain undreamt of by the sinners in Israel themselves.”

Like the prophets, God calls us to weep over the sins of our times. We are not prophets—their time and place has gone—but God calls us still to take up the mind of Christ in this, to pray for His mercy upon a sinful people, to pray our Lord would rain down repentance and bring reformation.