One of the Old Historic Philadelphia Churches 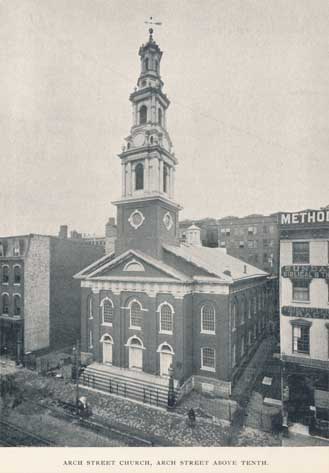 The Arch Street Church is the successor of the Fifth Presbyterian Church of Philadelphia. This latter church was in turn a daughter-church of the Second Presbyterian Church, worshiping initially in a chapel on Locust Street on property occupied by the Musical Fund Hall. The first pastor of the Arch Street church was the Rev. George Cox, who was installed as pastor in April of 1813.  Next came the Rev. James K. Birch who was installed July 19, 1813 and released November 5th, 1816.

Rev. Thomas H. Skinner was called from the pastorate of the Second Church and installed December 1st, 1816. He remained Pastor, with the exception of a brief interregnum, until called to the chair of Sacred Rhetoric in Andover Seminary in 1832.

The present church, pictured at right, was built and the first service held in it on June 7th, 1823. The dedication sermon was preached by Rev. Samuel Miller, D.D., of Princeton. In the choice of Dr. Skinner’s successor, Rev. George Duffield, D.D., was installed as pastor on April 5th, 1835, but this brought about a division within the congregation and a large number withdrew and formed Whitefield Chapel.

Dr. Duffield was succeeded within a short time by Rev. Thomas Waterbury, who was installed in December, 1837, and released in March, 1843; Rev. M. P. Thompson was pastor from 1844 to February 15th, 1848. The Fifth Church was dissolved, and on February 6th, 1850, a committee of the Philadelphia Presbytery, of which Rev. Drs. Boardman and Lord were members, met in the Seventh Church on Broad Street to deal with that closure. The historical account is unclear at this point,  but apparently a merger of the Fifth and  Arch Street congregations  was effected, thus creating a new iteration of the Arch Street Presbyterian Church, and so the church building was purchased by this newly formed organization. It called as its first pastor the Rev. Charles Wadsworth, D.D. He was installed March 20th, 1850, and continued as pastor until April 3d, 1862. The chapel in the rear of the church was added in 1852. The Sabbath-school was organized in 1850. Rev. N.W. Conklin, D.D., was pastor from 1863 to 1868. Rev. John L. Witherow, installed December 27th, 1868, continued until September 22d, 1873. Rev. John S. Sands was installed September 19th, 1880, and his relation dissolved May 6th, 1890. The pastor at the end of the nineteenth-century was the Rev. George P. Wilson, D.D., who was installed on April 26th, 1891.

Dr. Samuel Miller on Church Buildings:
At the service of dedication for the building in 1823, the Rev. Dr. Samuel Miller brought A sermon delivered June seventh, 1823, at the opening of the New Presbyterian Church in Arch Street in the city of Philadelphia, for the public worship of God. The text of Dr. Miller’s sermon was 2 Chronicles 6:41.

Denying, in this sermon, that to any place or edifice can now be attributed intrinsic holiness, and disapproving, therefore, of the idea that a church can be “consecrated;” Miller commends, however, “the practice of opening houses of public worship with appropriate religious exercises”—that is, their “dedication;” and on the ground of the “association of ideas,” he maintains that after a house has been so opened, “it is not desirable or proper, in ordinary cases, to employ it for any other purpose,” than the worship of God. As to church-building in general, he remarks,

“To expend millions upon a single place of worship now, while thousands of poor around us are suffering for bread, and while a great majority of our race are still covered with Pagan darkness, and perishing for lack of knowledge,—appears so unreasonable and criminal, that I hope we are in no danger of going to that extreme. But another, and, perhaps, a much more common extreme, especially in our church, taken at large, is, contenting ourselves with mean and uncomfortable houses in which to worship God. No worshipper ought ever to be willing to live in a better house than that which he, with others, has devoted to his Maker and Redeemer. And while, on the other hand, that splendour and magnificence of architecture, which is adapted to arrest and occupy the mind, and to draw it away from spiritual objects, ought carefully to be avoided; and avoided, not merely on the score of expense, but of Christian edification; so, on the other hand, that simple tasteful elegance, on which the eye is apt to rest with composed satisfaction; that studious provision for perfect convenience and comfort, which is calculated to place every worshipper in circumstances favourable to tranquil, undivided and devout attention, ought to be always and carefully consulted by every congregation, that is able to accomplish what is desirable in these respects.”

In a note on the passage quoted above, Dr. Miller stated that,

“It is a law of our mental, as well as of our physical nature, that two classes of emotions cannot be in a high, certainly not in a governing, degree of exercise at the same time. Whenever, therefore, we assemble for the worship of God in situations in which we are constantly surrounded and addressed by the most exquisite productions of art, which arrest and engross the mind, we are plainly, not in circumstances favourable to true spiritual worship. Would any rational man expect to find himself really devout in St. Peter’s at Rome, even if the most scriptural service were performed within its walls, until he should have become so familiar with the unrivalled specimens of taste and grandeur around him, as to forget or cease to feel them? Or, would any one be likely to “make melody in his heart to the Lord,” while the most skillful and touching refinements of music saluted and ravished his ears? Thrilled and transported he might be; but it would rather be the transport of natural taste, than the heavenliness of spiritual devotion. There never was a sounder maxim than that delivered in the plain and homely, but forcible language of the celebrated Mr. Poole, the learned compiler of the Synopsis Criticorum,–“the more inveiglements there are to sense, the more disadvantage to the spirit.” No one, of course, will consider this maxim as intended to teach, that, in order to promote the spirit of true devotion, it is necessary or desirable to be surrounded with that which is mean, irregular, or disgusting to the mind of taste. On the contrary, the fact is, that such mean and disgusting objects tend to arrest and draw away the mind in an opposite and painful manner; and are thus, perhaps, with respect to many persons, quite as unfriendly to the exercises of calm piety, as the utmost fascinations of art can be.” [pp. 21-23]