As Francis Schaeffer said, in the Kingdom of God, there are no little people. Rev. and Mrs. M.A. Pearson were two selfless servants in God’s vineyard, unknown to most, who labored in near poverty in order to bring the good news of Jesus Christ to the Cherokee nation.

Missionary to Cherokees Called Home to Be With Lord 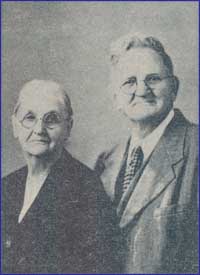 The Rev. M. A. Pearson, minister in the Bible Presbyterian Church and missionary for many years to the Cherokee Indians in Oklahoma, went to be with the Lord on Friday, May 6, 1955.

Mr. Pearson worked among the Cherokee Indians as a missionary from 1911 until his retirement in 1953.

Manford Alphaeus Pearson was born in Waverly, Kansas, June 26, 1876, graduated from Coe College, Cedar Rapids, Iowa, in 1903, and from Princeton Theological Seminary in 1906. From his graduation from Princeton until he entered the mission field, he was a local pastor, having been ordained by the Presbytery of Neosho (PCUSA), on September 19, 1906, whereupon he served as Stated Supply from 1906-1907 for PCUSA churches in Altamont and Mound Valley, Kansas. From 1907 to 1910, he served other PCUSA churches throughout Kansas, in Chetopa, Toronto, Liberal, Seiling and Helena. Finally, in 1911, he began his life’s work with the Cherokee Indians, working initially under the auspices of the PCUSA’s Board of Home Missions. laboring with the Cherokee Indian Mission in Oklahoma.

Rev. Pearson withdrew from the Presbyterian Church in the U.S.A. in 1922 due to the prevailing modernism of the denomination. From 1922-1939, he continued his work with the Cherokee by associating with the Gospel Missionary Union out of Kansas City, Missouri. He was later received by the Presbytery of Philadelphia, of the Presbyterian Church of America (later the OPC), on November 2, 1936, and subsequently was among those who in 1938 left to form the Bible Presbyterian Synod.

Mr. Pearson, during the last few years of his ministry with the Cherokees, translated parts of the Old Testament, then the Gospel of John, and later the New Testament into their language. The Cherokees had the Bible, but their copies were wearing out and the Bible Society did not plan to print more. Moreover, there were some 400 errors in the translation. For these reasons, Mr. Pearson made the new translation in Cherokee.

Upon his retirement, he moved to the East and was a resident in “Evening Rest,” the Bible Presbyterian Home for the Aged in Delanco, New Jersey. While there he made a number of recordings for use in the Cherokee Churches he had established where as yet there was no missionary or minister to take his place. On May 6, 1955, Rev. Pearson died suddenly of a heart attack while a guest at the Bible Presbyterian Home in Delanco, N.J.

Upon Rev. Pearson’s death, an obituary was printed on the pages of The Christian Beacon, which included the following memorial from the BPC Minutes of synod:

“His funeral was held in the tablernacle of the Bible Presbyterian Church of Collingswood, N.J. Dr. McIntire stated that he had known Mr. Pearson all the years of Synod. Mr. Pearson often stated that he had belonged to Synod before the formation of our Synod. He was a real scholar. He had done a great work of translation in the Cherokee Old and New Testament. From 1911 on he had worked among the Cherokee Indians. He was stalwart for the faith. Mrs. Pearson showed Dr. McIntire Mr. Pearson’s prayer list which he kept in an old shoe box. It contained a detailed card filing system of B.P. Ministers, Independent Board missionaries, regional officers of the I.C.C.C. and many others connected with the whole sphere of our work with notes and clippings concerning each. He had a great burden of prayer for our movement. Synod then stood for a season of prayer led by the Rev. Charles E. Richter.”

I can only wish that someone had thought to preserve that old shoe box full of prayer lists and cards. What a testimony it would bear.

Words to Live By:
A poem greatly loved and much quoted by Mr. Pearson is Annie Johnson Flint’s “He Giveth More Grace.”

He giveth more grace when the burden becomes greater.
He sendeth more strength when labors increase.
To added affliction he addeth His mercies,
To multiplied trials—His multiplied grace.

When we have exhausted our store of endurance,
When strength seems to fail ere the day is half done;
When we reach the end of our hoarded resources
Our Father’s full giving is only begun.

For Further Study, see the Records of the Pearson Mission to the Cherokee, preserved at the PCA Historical Center.

The Gospel of John the Apostle. [Westville, Okla.], 1948. Cherokee; 83 p.; 19 cm.  Note: Cherokee version by M.A. Pearson together with the King James Version in English. Includes English note on pronunciation. In the syllabic script elaborated by S.A. Worcester.