December 12: Thornwell on Our Nation’s Sin 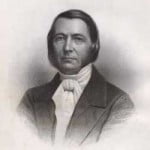 In 1854, the city of Charleston, South Carolina was ravaged with an epidemic of yellow fever. Later, at the behest of the State Legislature, the Rev. James H. Thornwell, then president of South Carolina College, brought a sermon at the State capitol on December 9, 1850. The title of his discourse, “Judgments: A Call to Repentance.” On this momentous occasion, the assembled audience saw themselves as “a sovereign people prostrating themselves before a sovereign God.”—”South Carolina, by her trusted agents and chosen representatives, in her organic capacity, as a distinct political community; in the power of her honored Chief Magistrate, in the two Houses of the Legislature, and the venerable Judges of the land, presenting herself, in humility and mourning, before the footstool of Him who standeth in the congregation of the mighty, and judgeth among the gods.”

As one reviewer noted, “The leading thoughts of the Sermon are as follows: The visitations of Providence expressive of the Divine displeasure are called “judgments,” because they are universally regarded as the penal inflictions of a Judge or Ruler. This implies the conviction of our nature that there is a personal God; and if God be a Person, then all his dispensations have some purpose or design, and this design is to be ascertained by an observation of the tendency of the dispensations. The tendency of public, wide-spread afflictions is to create a sense of guilt in the bosoms of men,—to make them tremble at the anger, and dread the justice of their Judge; and so, to restrain transgression, and preserve the innocent in their integrity. There is an inseparable connexion between suffering and sin; and so strong is the conviction of the human mind upon this point, that there is always danger of misinterpreting Providence, by making the degree of suffering the exponent of the measure of guilt. All, however, that we have a right to conclude from even extraordinary suffering, is the existence of sin, and the consequent necessity of repentance. And this repentance is the duty of the spectators, as well as of the sufferers. “Except ye”—the spectators of the woes—”repent, ye shall all likewise perish.”

Then, following Thornwell’s delivery of this discourse, representatives from the two houses of the legislature wrote to Thornwell on December 12, 1850, requesting a copy of his discourse for publication. Click here to read the full discourse.

The words that follow form the heart of Thornwell’s discourse. They are insightful, almost prophetic words, and here I think Thornwell puts his finger on the crux of our nation’s sin, then and now. What he seems not to see, however, is that this same sin is at the root of the system of slavery and racism that so troubled the nation then and which besets us to this day. Finally, the logical conclusion of this sin is the deification of the individual, and we see that hydra-headed monster coming into all its “glory” in our time. Racism is but one expression of the sin of self-deification. Me first. My ‘rights’ over all else. What I want, rather than bowing the knee to the will of the sovereign Lord of the universe.

“The sins which have been mentioned, and which confessedly prevail to a melancholy extent through the length and breadth of the land, though they call for humiliation and repentance here, are, perhaps, not so appropriate to this occasion, as those which spring from the tendencies and workings of our forms and principles of government. Bear with me in briefly stating what seems to me to be a species of idolatry which cannot fail to bring down upon us, sooner or later, the righteous judgments of God. I allude to what may be called the deification of the people. They are frequently represented as the source of all political power and rights; the very fountain head of sovereignty. It is their will which makes law; it is their will which unmakes it. A supremacy is ascribed to that will which he who reads the Bible and recognizes a God that has dominion over the children of men, must feel to be shocking. They are really treated as a species of Deity upon the earth. Now this whole representation is not only inconsistent with religion, it is equally inconsistent with the philosophy upon which our popular institutions are founded. The government of this country does not proceed upon the maxim that the will of the people is the will of God, and its arrangements have not been made with a reference to the end, that their will may be simply ascertained. This legislature is not a congregation of deputies, or ministerial agents, and you have, and know that you have, higher functions to perform than merely to inquire what do the people think. I do not underrate their opinions; they must always enter as an element in sober and wise deliberation; but what I maintain is, that the true and legitimate end of government is not to accomplish their will, but to do and enforce what reason, conscience, and truth pronounce to be right. To the eternal law of right reason, which is the law of God, all are equally subject, and forms of government are only devices and expedients to reach the dictates of that law and apply it to the countless exigencies of social and individual life. The State is a Divine ordinance, a social institute, founded on the principle of justice, and it has great moral purposes to subserve, in relation to which the constitution of its government may be pronounced good or bad. The will of the people should be done only when the people will what is right, and then primarily not because they will it, but because it is right. Great deference should be paid to their opinions, because general consent is a presumption of reason and truth.

The peculiarity of a representative system is that it governs through deliberative assemblies. Their excellence is in the circumstance that they are deliberative, which affords a reasonable security that truth and justice may prevail. So far from being mere exponents of public sentiment, their highest merit is that they are a check upon popular power— a barrier reared against the tide of passion, to beat back its waves, until reason can be fairly heard. There is no misapprehension more dangerous than that which confounds representative government with the essential principle of a pure democracy. It is not a contrivance to adapt the exercise of supreme power on the part of the people to extensive territory or abundant population, to meet the physical impediments which in large States, must obviously exist to the collection of their citizens in one vast assembly. It is not because the people cannot meet, but because they ought not to meet, that the representative council in modern times is preferred to the ancient convocations in the forum or market place. It is to be prized, because it affords facilities and removes hinderances in the discovery of truth; but the supreme power is truth, and not man; God, not the creature.

Now whatever representations diminish the authority of the Divine law as the supreme rule, and make the State the creature and organ of popular will, as if an absolute sovereignty were vested in that, are equally repugnant to religion and the true conception of our government. An absolute democracy is the worst of all governments, because it is judicially cursed as treason against God, and is given over to the blindness of impulse and passion. I am afraid that in this matter we have trodden upon the verge of error—we have forgotten that the State is ordained of God, and that our relations to each other are those of mutual consultation and advice, while all are absolutely subject to Him.

In proportion as we lose the true conception of the State, we fall short of realizing in ourselves that perfection of developement and happiness which it was instituted to achieve. Hence, it is not unusual that as extremes meet, those who in theory clothe the people with the prerogatives of God, practically degrade them below the level of intellectual existence. When we cease to regard the State as a great instrument of moral education, it is not surprising that the education itself should be disregarded, and these Gods be left to demonstrate that after all, they are but men.

Let it be once conceded that government is but an organ of the popular will, the business of the statesman is very simple—it is only to find out what the people wish; and as all courts are attractive by the patronage they bestow, we may expect to see a system in operation, whose only tendency is to secure personal popularity. The ambition of Legislators and Senators will be directed to the gaining of popular favour, and whatever arts promise to be most successful, will be held to be legitimate, as they are the customs and usages of the Court, whose seal of approbation is desired. The consequences must be disastrous to all the parties concerned. There will and must be corruption and bribery. There will and must be unbecoming condescensions. The aspirants for distinction, however they may abhor these practices, and reproach themselves in stooping to them, feel compelled to resort to them as the conditions of success, and it will always happen that where the people are deified in theory, they will be degraded and corrupted in practice. Men will be promoted, not according to their wisdom and worth; not according to their ability to answer the ends of the State in eliciting the voice of reason and of truth, and securing the reign of universal justice—they will be promoted according to their pliancy in pandering to popular tastes. The demagogue will supplant the statesman—the representative be replaced with a tool.”