He Died with his Boots On 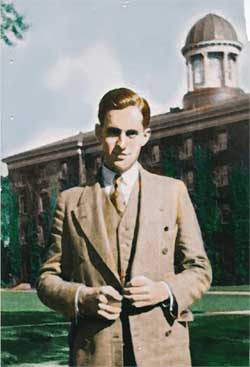 The Rev. Dr. David K. Myers had a full ministry during his life of eighty-nine years.  Rural pastor, church planter, evangelist, Army chaplain through two wars, seminary professor, this husband and father of four  children lived and ministered through the turbulent years of the modernist-fundamental controversies of the nineteen thirties.  He took his stand with the historical Christian faith by leaving the Presbyterian Church USA in 1936.  Back then, their form of government stated that you could do that, if there were no charges against you.  So in 1936, he joined the newly formed Presbyterian Church of America.  Imagine his surprise when his  former PCUSA Presbytery brought charges against him for leaving what the form of government allowed him to do.  While the Presbytery eventually dropped the charges, the western Synod of that same increasingly liberal church brought them up again and, after a trial, deposed him from the gospel ministry.  They put him out after he had been out for a full year!  His ordination was restored by the Presbyterian Church of America.  He went on to minister in the Bible Presbyterian Church for over 50 years.

What is striking about his long ministry is the manner in which the Lord took him home on February 16, 1992.  After the death of his Scottish wife, he entered the County Home in Muskegon, Michigan.  At this time, he was in his late eighties.  Once, his two sons, both ministers in the Presbyterian Church in America, visited him.  They wanted to find out how their widowed father was doing.  One of them has sent  him a chess set to take up his time.  They were both surprised to find out that it remained half opened on his window sill.  Questioning their father who loved a good chess game, they were interrupted by the County Superintendent who had heard that Chaplain Myers’ two minister sons were visiting.  He proceeded to fill them in on their father’s activities.

Chaplain Myers has become, he said, the unofficial  chaplain of the home.  Several prayer chains were going strong in the Home.  Bible studies were being held regularly inside the home.  Daily visitations were being made to all the hospital beds by Chaplain Myers in his wheel chair.  Even a Sunday afternoon worship service was being conducted by evangelical ministers in the city.  He was still busy in the work of the Lord, and thus, the superintendent said, had no time for a silly game of chess.

It was at one of these worship services that God took His servant home. The regularly scheduled pastor failed to show for some reason.  So Dad took over the worship service himself,  Playing the piano for the song service, he even sang as a solo that old gospel favorite “Jesus is tenderly calling me home.”  Preaching a gospel sermon impromptu, he gave the benediction, even shaking hands with everyone who came out to the service.

Visiting several who couldn’t make it due to health, Chaplain  Myers went back to his own room to wait for lunch.  It was there that  they found him in the body, but his spirit was already in heaven.  As someone remarked, “Chaplain Myers died with his boots on.”

Words to Live By: As the gospel song puts it, “Let us labor for the Master from the dawn till setting sun, let us talk of all his wondrous love and care; then when all of life is over and our work on earth is done. and the roll is called up yonder, I’ll be there.”  Reader, is it your assurance that you will have a place in heaven?  You can, if you trust in Christ’s life and work on your behalf, by grace alone, through faith alone.  And Christian reader, is it your life work to labor for the Master until your work on earth is done?  May God’s Spirit give such to His church who will answer in the affirmative this question.

Also on this day:
1921 – Death of Benjamin Breckinridge Warfield.