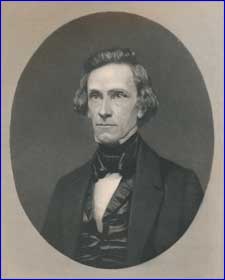 Biographer of the Mother Church

Richard Webster was born in Albany, New York, on July 14, 1811, the youngest son of Charles R. And Cynthia (Steele) Webster. He died at Mauch Chunk [now Jim Thorpe], Pennsylvania, on Thursday morning, June 19, 1856, just twenty-five days short of his forty-fifth birthday. A graduate of Union College (1829) and Princeton Theological Seminary (1834), he initially sought service as a missionary under the American Board of Commissioners for Foreign Missions, but was providentially hindered. Turning to other avenues, he was designated a home missionary by the Presbytery of Albany, and was soon engaged in ministering to those living in and around Easton, Pennsylvania. After a time, he expanded his field of labor northwest of Easton along the Lehigh River, to the region of Mauch Chunk, where coal mining was recently underway. By 1836, a church had been established there, and he faithfully gave the rest of his life to his congregation and to the people of Mauch Chunk.

But Rev. Webster was not simply a small-town pastor of average gifts and ability. His skills and situation combined to direct his attention to the history of the Church. Charles Hodge had some years earlier published his Constitutional History of the Presbyterian Church (1839). But that effort was limited in scope. Webster’s work was more ambitious, and upon completion, was the first work ever published by the Presbyterian Historical Society.

“Richard Webster has never been appreciated. That he bore up so bravely, and, on the whole, patiently and meekly,—that he laboured kindly on in an obscure place for a lifetime, with no more restlessness than was betrayed in an occasional satiric hit at some of our famous men,—is a wonder, attributable partly to the nobleness of his nature, and, we must devoutly add, partly to the grace of God, which was given to him in no common measure. It was his misfortune, as men estimate things, to have a body of most frail and nervous organization; he reminded one of Charles Lamb, only that he was sharper, and thus not so genial. He was very deaf, even at the Seminary; and it grew upon him steadily with increasing years. He was very near-sighted, and he grew prematurely old. A man who always appeared to me young, I found spoken of as old,—almost (partly from his connection with ancient historical documents) as an antique. These defects, especially his deafness, interfered materially with his power as a public speaker. He heard none of the ordinary sounds of nature in the fields or woods; he heard nothing of the mixed sounds of a great city; he heard nothing, he once wrote to me, but ‘the human voice raised more loudly than usual.’

“This comparative isolation from society, and physical unfitness for much of the business of life, drove him to history. Passionately devoted to the Presbyterian church, holding our Faith and Order to be the very primitive form and mould of apostolic truth, he could conceive of nothing more noble and venerable than Calvinism and Presbyterianism. Around the church he poured the wealth of his reverence, his imagination, and his affection; and by how much he was restrained from being a great actor in the present, he determined to chronicle what was great in the past. It was impossible to confine so active, so versatile, so eager and so discursive a mind to one small spot; it lay in his nature to expand itself; and, if he could not be an ecclesiastical statesman, his instincts led him next to be an ecclesiastical historian. Yet, after all,—for we would not allow the partiality of friendship, even over his grave, to lead us from the strict truth,—as he would always and under all circumstances have been rather artist than statesman, so he had not so much the large comprehensiveness and far-seeing sagacity of the true historian, as the keen observation, the acute insight, the delight in an event, the homelike feeling, the fondness for anecdote and incident, which make the biographer. And it is no mean thing to be known to after-times, for how long we may not yet say, as the biographer of the Presbyterian church in America.

Words to Live By:
See how the Lord equips each one of His children with gifts and abilities particularly suited to that person’s place in the Church. Many of life’s frustrations arise from our failure to recognize how (and/or when) the Lord might use these gifts for His glory. We all want to be useful, to bear fruit in service to our God. The Lord has given His promise; it is our place to wait on Him.