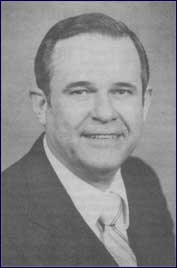 Donald Bray Patterson was born in Quitman, Georgia, July 26, 1923, to James Hastings Patterson and Ethel Bray Patterson. He was raised in the Presbyterian Church, and professed faith in Jesus Christ as a boy.

During World War II, he served as a bombardier on a B-24 Liberator in the Army Air Corps in the Southwest Pacific. After the war, he returned to Wheaton College (Ill.), graduating from there in 1948. In 1951, Don Patterson received his theology degree from Columbia Theological Seminary, Decatur, Ga. Belhaven College granted him an honorary Doctor of Divinity degree in 1972.

In 1947, he married Jeanne Taber in Hackensack, N.J. Three children were born to them: Elizabeth, James, and Shirley.

Dr. Patterson retired from the pastorate in 1983, and became Minister-at-Large for Mission to the World (MTW), the world missions arm of the Presbyterian Church in America. In 1993, his job description changed to that of Representative for MTW.

Two years before the PCA celebrated her silver anniversary in 1998, Dr. Patterson was chosen as one of two Co-Chairmen of the Twenty-fifth Anniversary Celebration Committee. That 24th General Assembly would be the last one he attended. Suffering from illness, he could not make it to the 25th Assembly in 1997. Nor could he attend the 26th General Assembly in the summer of 1998. The Anniversary Committee had hoped to nominate him for Moderator, but his weakened condition caused his absence from the court of the church he loved. The Assembly unanimously bestowed on him the title of Honorary Moderator, and news of this honor was conveyed to him as he lay in bed.

Don Patterson continued to fight the illness, but finally succumbed on the evening of December 25, 1998, with his wife of fifty-one years at his side. His passing came exactly three weeks after the twenty-fifth anniversary of the founding of the PCA.

The classic church structure pointed its steeple into the gray skies. Outside, it was a cold Sabbath afternoon in Atlanta.

Inside, the atmosphere was serious, and respectful, but not gloomy. A crowd of worshippers had gathered to bow before the Lord, and pay respects to one of the faithful warriors of the church militant, who had now entered the church triumphant.

Conducting the service was Dr. Paul Kooistra, Coordinator of the Mission to the World (MTW) Committee of the Presbyterian Church in America. His selection reflected the commitment to world missions by Dr. Patterson, who had served both as a Committee member and an employee of MTW.

The first eulogizer was his long-time friend Kennedy Smartt. The present Moderator of the General Assembly, Dr. Smartt was elected to that post only because Don Patterson, who would have been nominated, was too weak to attend the Assembly. Moderator Smartt read Philippians 1:20-23. He told the congregation that “the testimony of the Apostle Paul was the same which we would expect from our friend, Don Patterson.” His theme was that of “Have thine own way, Lord.” Referring to Philippians 1:21a (“For to me to live is Christ”), Dr. Smartt said of Don Patterson: “That was his desire and his ambition-to magnify the Lord Jesus Christ.”

To Kennedy Smartt, Don Patterson was akin to Mr. Great Heart, the character in Pilgrim’s Progress who tore down Doubting Castle and slew the giant. The contemporary Mr. Great Heart was, said Dr. Smartt, Mr. PCA. He was “a champion not only for the Bible to be the Word of God, but also a champion for a denomination that would put world missions and evangelism at the forefront.”

That burning passion for world missions had led Dr. Patterson and Dr. John Kyle, the first Coordinator for Mission to the World Committee, to pioneer the notion of cooperative agreements, whereby people from the Presbyterian Church in America could serve simultaneously as denominational missionaries and as missionaries with other, independent agencies. Unique at the time, this type of arrangement has been employed by other churches.

Pastor Smartt read also II Timothy 4:6-8. The Apostle’s familiar words in verse 7-“I have fought a good fight, I have finished my course, I have kept the faith”-characterized Don Patterson, said the preacher. He recounted how the two of them started rooming at Presbyterian General Assemblies even before the PCA came into existence. They “used to pray and read the Bible together,” he recalled. And then he said of his old friend: “He fought a good fight all through his life, but he fought a good fight the last eight months. . . . Don Patterson finished the race with his torch burning, aflame for God.”

Verse 8-“Henceforth there is laid up for me a crown of righteousness, which the Lord, the righteous judge, shall give me at that day: and not to me only, but unto all them also that love his appearing”-also was apropos. “How eloquent that was to describe Don Patterson,” Kennedy Smartt averred. “A champion for God! A gentleman! There aren’t many gentlemen left in this world today. . . . An encourager!”

On that last point, Dr. Smartt referred to an email sent recently to Don and his wife Jeanne Patterson, by Don and Carol Iverson. Those MTW missionaries to Japan expressed great appreciation for the encouragement which the Pattersons had been to them, not only while on the mission field, but also when they were deliberating where the Lord would have them serve.
Kennedy Smartt concluded: “Praise God that He gave us an encourager in these days. And as they sang in Jackson, ‘Hallelujah! The Lord God omnipotent reigneth!'”

Dr. John Kyle also gave a message. He began by reading II Corinthians 5:1-10. Dr. Kyle said that Don Patterson was a “multi-faceted person.” He was “a world Christian” (even before that term was coined), for he had “a burden for the world.” After his retirement from the pastorate at First Presbyterian in Jackson, he became MTW’s Church Relations Director and assumed other responsibilities, including ministering to missionaries and to fifty organizations “with which we have cooperative agreements.” Dr. Kyle continued that “Don Patterson was known around the world, not just by Presbyterian and Reformed people.”

The end of the service featured a litany of short speeches by a variety of people who wanted to express their thoughts about the man. The first to come to the microphone was Dr. Kyle’s son, Jay. He said of Dr. Patterson: “His commitment to the Word of God was paramount.” Dr. Patterson’s commitment to world evangelization was summed up by the sentence, “We must tell the next generation that people do not know Jesus Christ.”

Dave Smith, missionary to Ukraine, said that he would remember Don Patterson for three things. First, with regard to vision, he said, “Don had a vision-even for plumbing, so we could house more people.” His vision extended to the nationals who were being trained as church leaders. Second, with regard to caring, “Don Patterson really cared. . . . He wanted to know what was going on with [the missionaries].” Third, Don Patterson was an example, in the way that he lived his life.

Marcus Kyle, another son of Dr. Kyle; Gerald Morgan, who worked as an administrator for MTW; Jim Hughes of Insurance, Annuities and Relief; and Mrs. Strom, retired missionary to India, also shared their thoughts.

After the service, the Patterson family, including his widow, graciously received the many congregants who had come.

The following is a letter dictated by Don Patterson to one of his daughters, dated December, 1998.

Although I had intended to write this letter a long time ago, I left it to the very end. The Doctor doesn’t give me much encouragement for a future life, and I’m taking him at his word. Although none of us know when our time has come, still we know that death is inevitable.

Since February, 1997, I have struggled with cancer, then radiation, but worst came when I came back from Ukraine with a solid case of pneumonia. My heart couldn’t take the load and got weaker and weaker. Now it is about to give out. Without your heart, you don’t function very well.

My hope is in Jesus Christ, my Savior, who gave His life for me. I stand firm on the promises that God gives in His word. I’m claiming the verse, “Faithful is He who calls you Who will also do it.” I praise Him for the years of service He was allowed me both in this country and overseas. He has been gracious and loving throughout it all. What a joy to know Him as Lord!
Jeanne and the children stand beside me constant and caring. I see the love in their eyes. I wish I could greet each one of you personally. I would thank you for all the cards, letters, e-mails and gifts that have poured in during the last year and a half of illness.

May our God who made Christmas possible be with you. I soon will see Him face to face.  Glorious!

To God alone be all glory and praise.