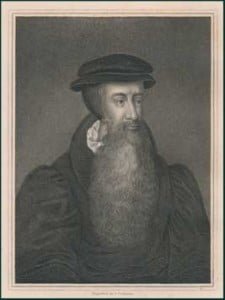 No Wonder He Was Weary.

Our post today, an account of the death of John Knox, is taken from the essential biography written by Thomas McCrie:—

Monday, the 24th of November [1572], was the last day that he spent on earth. That morning he could not be persuaded to lie in bed, but, though unable to stand alone, rose between nine and ten o’clock, and put on his stockings and doublet. Being conducted to a chair, he sat about half an hour, and then was put in bed again. In the progress of the day, it appeared evident that his end drew near. Besides his wife and Richard Bannatyne, Campbell of Kinyeancleugh, Johnston of Elphingston, and Dr. Preston, three of his most intimate acquaintances, sat by turns at his bed-side. Kinyeancleugh asked him, if he had any pain. “It is no painful pain, but such a pain as shall, I trust, put end to the battle. I must leave the care of my wife and children to you (continued he,) to whom you must be a husband in my room.” About three o’clock int he afternoon, one of his eyes failed, and his speech was considerably affected. he desired his wife to read the fifteenth chapter of the first epistle to the Corinthians. “Is not that a comfortable chapter?” said he, when it was finished. “O what sweet and salutary consolation the Lord hath afforded me from that chapter!” A little after, he said, “Now, for the last time, I commend my soul, spirit, and body (touching three of his fingers) into thy hand, O Lord.” About five o’clock, he said to his wife, “Go, read where I cast my first anchor;” upon which she read the seventeenth chapter of John’s Gospel, and afterwards a part of Calvin’s sermons on the Ephesians.

After this he appeared to fall into a slumber, interrupted by heavy moans, during which the attendants looked every moment for his dissolution. But at length he awaked as if from sleep, and being asked the cause of his sighing so deeply, replied, “I have formerly, during my frail life, sustained many contests, and many assaults of Satan; but at present that roaring lion hath assailed me most furiously, and put forth all his strength to devour, and make an end of me at once. Often before has he placed my sins before my eyes, often tempted me to despair, often endeavoured to ensnare me by the allurements of the world; but these weapons being broken by the sword of the Spirit, the word of God, he could not prevail. Now he was [sic] attacked me in another way; the cunning serpent has laboured to persuade me that I have merited heaven and eternal blessedness, by the faithful discharge of my ministry. But blessed be God who has enabled me to beat down and quench this fiery dart, by suggesting to me such passages of Scripture as these, What hast thou that thou hast not received? By the grace of God I am what I am : Not I, but the grace of God in me. Being thus vanquished, he left me. Wherefore I give thanks to my God through Jesus Christ, who was pleased to give me the victory; and I am persuaded that the tempter shall not again attack me, but, within a short time, I shall, without any great bodily pain or anguish of mind, exchange this mortal and miserable life for a blessed immortality through Jesus Christ.”

He died in the sixty-seventh year of his age, not so much oppressed with years, as worn out and exhausted by his extraordinary labours of body and anxieties of mind. Few men were ever exposed to more dangers, or underwent such hardships. From the time that he embraced the reformed religion, till he breathed his last, seldom did he enjoy a respite from these, and he emerged from one scene of difficulties, only to be involved in another, and a more distressing one. Obligated to flee from St. Andrews to escape the fury of Cardinal Beatoun, he found a retreat in East Lothian, from which he was hunted by Archbishop Hamilton. He lived for several years as an outlaw, in daily apprehension of falling a prey to those who eagerly sought his life. The few months during which he enjoyed protection in the castle of St. Andrews were succeeded by a long and rigorous captivity. After enjoying some repose in England, he was again driven into banishment, and for five years wandered as an exile on the continent. When he returned to his native country, it was to engage in a struggle of the most perilous and arduous kind. After the Reformation was established, and he was settled in the capital, he was involved in a continual contest with the Court. When he was relieved from this warfare, and thought only of ending his days in peace, he was again called into the field; and, although scarcely able to walk, was obliged to remove from his flock, and to avoid the fury of his enemies by submitting to a new banishment. He was repeatedly condemned for heresy and proclaimed an outlaw; thrice he was accused of high treason, and on two of these occasions he appeared and underwent a trial. A price was publicly set on his head; assassins were employed to kill him; and his life was attempted both with the pistol and the dagger. Yet he escaped all these perils, and finished his course in peace and in honour. No wonder that he was weary of the world, and anxious to depart; and with great propriety might it be said, at his decease, that “he rested from his labours.”

it is the Lord God who raises up His faithful, humble servants and employs them in powerful ways to advance His kingdom. Pray that He would yet again shake the kingdoms of this earth with the fervent preaching of His glorious Gospel. Our God has done this time and again in the past, and He can and will so move yet again. Are you so praying and watching expectantly?