November 20: The League of Evangelical Students 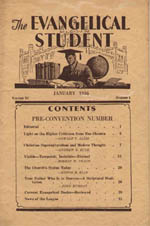 It was on this day, November 20th, in 1925, that students from across the nation gathered in Grand Rapids for the first annual conference sponsored by the new campus ministry known as the League of Evangelical Students. Seeking to establish an evangelical campus ministry, invitations went out in January of 1925 to a select number of seminaries. Six schools sent delegates to a meeting in April and a constitution was drawn up. Then, wasting no time, the November conference was planned and carried off to great success.

Established under the leadership of Dr. J. Gresham Machen and other prominent evangelical and Reformed scholars, the League began with high promise, but in sixteen short years, it had run its course and disappeared off the stage of campus ministry. Yet the League, despite a short term of ministry, can be said to have accomplished much. A fore-runner of InterVarsity and Reformed University Ministries, the League of Evangelical Students played a significant role in breaking up the fallow ground of campus ministry.

To understand more about the League and its work, we can do no better than to read the following reports from three of the conference leaders:

The League of Evangelical Students was given the great impetus, which promises to make it a very real factor in the lives of American students, at its First Annual Conference held in Grand Rapids, Michigan, November 20-24, 1925. At this conference nineteen schools were represented, eleven theological seminaries and eight Bible schools, and these represented student bodies from Texas to Canada and from the Atlantic to the Pacific. Advocates of Christian Unity can take comfort in the fact that these schools represented at least eight of the prominent protestant denominations. One of the outstanding facts of the Conference was the splendid spirit of harmony and Christian unity manifested. The true joy of Christian fellowship was an admitted blessing to every delegate.

The Conference was the guest of Calvin Theological Seminary whose generous hospitality and helpful cooperation added greatly to its successful issue.

The importance of the League in the estimation of prominent conservative Christian leaders is evidenced by the presence at the Conference of such a representative group as the following list discloses. These men came as delegates, or upon invitation, to lend their judgment and to give addresses. Their presence was a proof of the need and place of an evangelical witness among students today. Dr. J. Gresham Machen, Princeton Seminary, Presbyterian U.S.A., spoke on the theme, “The Church’s Historic Fight against Modernism from Within.” Dr. Leander S. Keyser, Hamma Divinity School, Lutheran, gave two addresses on “Christianity and Liberalism,” and “The Origin of Man and Woman.” Rev. Harold Paul Sloan, Haddonfield, N.J., spoke on “What Modernism denies.” Dr. J.E. Kuizenga, Western Theological Seminary, Holland, Mich., Reformed A., spoke on the theme, “The Supernaturalness of Christianity.” Rev. Joseph A. Schofield, Hobart, N.Y., gave a history of the movement. To these may be added the addresses of Dr. Melvin G. Kyle, Xenia Seminary, United Presbyterian, and Prof. S. Volbeda, Calvin Seminary, Christian Reformed, which are reported in other parts of this paper.

The keynote of the Conference was unswerving loyalty to the Bible as the only authoritative rule of faith and practice.

The League’s Program
by Ned B. Stonehouse

“Ye shall be my witnesses.” These words are fulfilled by the witness of the individual Christian to his Lord and personal Saviour and by the great corporate witness of the Christian Church to Christ, its Head. Besides the perennial necessity of these forms of witness bearing, in times of doubt and unbelief and attach upon the Holy Scriptures, it becomes the right and obligation of Christians to band themselves together for the purpose of a united testimony to their common Faith.

The League of Evangelical Students is a witness-bearing organization. It is a movement among Christian students to bear witness to the Christian Religion in its Biblical, supernatural, historical interpretation. Such a witness necessarily includes a defense against the widespread attacks of present-day radicalism. That there is the need of a testimony before the world that there are thousands of students in institutions of higher learning who accept fully the fundamentals of the Christian Faith no one will deny.

One of the greatest fields of opportunity for the League is to present the claims of the true gospel ministry to college men. In too many educational institutions there is an idea that the purpose of the Christian ministry is simply the general uplift and improvement of mankind. This is important, but secondary. Over against this view, the League hopes to present the distinct calling of the Christian ministry to openly set forth Christ and Him crucified, the Saviour from sin and death through the atonement wrought by His shed blood.

The conference at Grand Rapids discussed and recommended the following as effectual means of carrying out the League’s purposes:
1. Promotion of the formation of chapters of evangelical students in seminaries, Bible schools, colleges, and universities.
2. Holding of conferences for inspiration, fellowship and the discussion of common problems; annually of the whole League and sectional conferences more frequently.
3. Sending of deputations to present the evangelical point of view and the claims of the gospel ministry.
4. Establishment of a bureau of evangelical leaders who will be available for addresses, especially at colleges.
5. Preparation of suggested reading for students with religious problems.
6. The publication of an official organ. [This was The Evangelical Student]
7. Issue of literature on the factual bases of the gospel.

THE greatest need of the world today and of every individual in the world is the religion of Jesus Christ. More important than any social improvement, any economic advancement, any political or moral reform, is the extension of the kingdom of God, through the proclamation of the pure Gospel of Jesus Christ. Never did the world need this more than at the present time. Material conditions were never better, political and social advancements never greater, yet the world is not satisfied. Unrest and discontent abound. The only true satisfaction lies in the religion of Jesus Christ. The most real way to obey the second great commandment, “Thou shalt love they neighbor as thyself,” is through obeying the first commandment, “Thou shalt love the Lord thy God with all thy heart, and with all thy mind, and with all thy strength.”

Strange as it might seem, in this time of all times when Christians should present a united front before the world, and proclaim their God-given Gospel with power and conviction, foes to that Gospel have arisen within the very confines of the Christian Church itself, and many are seeking to dilute it until it loses all that gives it its distinctive power. No wonder scoffers outside the church are saying that the church is dead, when men inside the church are denying or explaining away the foundation stones of the church’s gospel.

The League of Evangelical Students is a student movement, originated by students, to declare beforethe world that there are in our educational institutions large bodies of students who believe thoroughly in the evangelical Gospel in all its richness. Radicalism and skepticism is noisy. It quickly makes its presence felt. It spreads rapidly, like the leaven described in Holy Scripture. Reading the accounts of student life in many current publications might lead one to believe that most seekers after learning had gone over to the ranks of Modernism and Infidelity. Attending some student conferences might lead one to a similar conclusion. It behooves the great body of students who accept the “Faith of our Fathers” to band together to witness to their conviction, and to record their opposition to the stealthy progress of religious unbelief.

The enemies of evangelical Christianity claim to represent intellectualism and scholarship. But truth is one, and the truths discovered by human research cannot reasonably contradict the truths revealed by the Maker of the Universe. The highest scholarship cannot discover any facts which contradict the plain teachings of the Bible. As Dr. Keyser declared at the Grand Rapids Conference: “I maintain that the finest shcolarship in the owrld, under the proper conditions, will lead just to the top of Mt. Calvary.” In the face of the widespread assertions that modern scholarship has rendered conservative Christianity untenable, the members of the League are witnessing to their conviction that true education is possible only when the facts revealed in God’s word are recognized as authoritative.

It is with this spirit that the League has been organized. It desires to include within its membership all who wish to declare with it their adherence to Biblical, supernatural Christianity. The occasion for its formation is plainly stated in the preamble to its constitution. Section I of Article III gives the qualifications for membership:

Qualifications for membership in the League shall be faith in the Bible as the infallible Word of God, and acceptance of the fundamental truths of the Christian Religion, such as: the Trinity, the Virgin Birth of Christ, His Divine and Human Nature, His Substitutionary Atonement, His Resurrection from the Dead, and His Coming Again.

This statement was purposely made very brief and simple, as the League had no intention of promulgating a new creed. It takes its stand upon historic Christianity, the common heritage of all the Evangelical Churches. It is not a movement toward church unity, nor has it a desire in any way to minimize the distinctive doctrines of the various denominations. But it is a movement of studnets who believe in supernaturalistic Christianity, from all the denominations, joining together for the specific purposes outlined in the Constitution of the League. This is very clearly stated in the next section of the Constitution (Art III, Sec. 2):

The above summary is not intended to be regarded as a complete statement, nor as an authoritative definition of the limits of Christian fellowship, but simply as an indication of the class of persons whom the League welcomes as members.

Mutually exclusive conceptions of the nature of the Christian Religion are current today. Every student who calls himself a Christian can easily determine which of these conceptions he holds. The League is a movement of those who hold one of these conceptions–that which regards the Christian Religion as a supernaturally revealed body of facts, showing how man can receive eternal life, through the great act of God who sent His only-begotten Son to die on Calvary’s cross for the sins of the world.

The above articles were transcribed from The Evangelical Student (Princeton, NJ), Volume I, No. 1 (April 1926), pages 3-4.