The Presbyterian clergymen had been identified as either ministers and waiting to be called to place of ministry.  Through informal talks, it was agreed by these seven ministers to gather for a presbytery meeting, the first to be held in the colonies of America. They did gather in the month of March, 1706 in Philadelphia.  We know that it happened before the 28th of that month.  But the exact date of this first presbytery is unknown to us because the stated clerk lost all but two paragraphs of the meeting.  The stated clerk, unknown in name, was the culprit.  Judging however from the date of  later meetings  in the following years, we can estimate that this meeting was held on March 18, 1706, with the Rev. Francis Makemie as the first moderator. 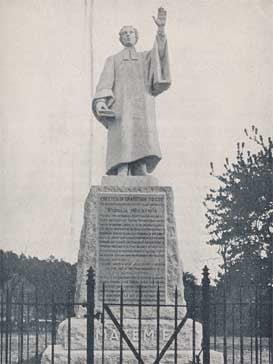 A review of the historic seven names of this original Presbytery might be profitable.  Even before you read the rest of this paragraph, close your eyes and see if you can name any of the seven clergy?  They were: Francis Makemie, John Hampton, George MacNish, Samuel Davis, John Wilson, Jedediah  Andrews, and Nathaniel Taylor.  Their backgrounds show a wide divergence of  traditions.  Makemie was Scot-Irish with strong ties to those mother countries of Presbyterian pilgrims.  Samuel Davis came from Ireland and pastored a church in Lewes, Delaware.  Three of the ministers were from New England.  Jedediah Andrews was a graduate of Harvard.  John Wilson was pastor at New Castle.  Nathaniel Taylor was also from New England.  The other two, George McNish and John Hampton, had just come over from England in answer to the call of Makemie.  Of the original seven, only three were pastors and the rest were missionaries.

Now Samuel Davis had sent an excuse to this first meeting. It evidently had something to do with travel time to get to Presbytery.   However the excuse was not sustained by the brethren.  They were not going to allow for any variance with what they considered to be both a privilege as well as a duty in attendance at Presbytery.

The purpose of the Presbytery was described later as a meeting of ministers for consultation as to the most proper measures for advancing religion and propagating Christianity in the colonies.  A second purpose was listed as furthering and promoting the true interests of religion and godliness.  The last reason was for the improvement of the ministerial abilities of teaching elders, which improvement was to be tested by prescribing text to be preached upon by two ministers at every Presbytery meeting.  That performance was subject to the criticism, positive and negative, of the rest of the elders.

Hebrews 1:1, 2 was the assigned text for the 1707 presbytery, to be preached  by Francis Makemie and John Wilson.

The organization of Presbyterians thus gave them an early advantage over other religious traditions in the colonies.  They were ready to press on the inhabitants of this new land the value of holding true to the Scriptures, the Reformed faith, and the Great Commission.

Words to Live By: In faith and life, let everything be done decently and in order.  Especially is this a good rule for the planting of a church. What you do in the beginning days will be central in building the church in succeeding days.  So start the church well, according to Biblical principles and practices, and that rule will continue in later years, receiving the blessing of the Lord.

Through the Standards: The Humiliation of Christ according to the Catechisms