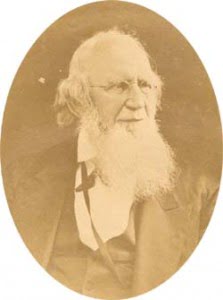 When he was still quite young, George came across a copy of Cotton Mather’sMagnalia Christi Americana (The Glorious Works of Christ in America — vol. 1 of which can be read here.) among his father’s books. There he encountered Latin sentences peppered throughout the text, and so began his study of the Latin language. He pursued that study formally at Mr. Ford’s school in Dedham, and, as he later related, “said his hic, haec, hoc in his trundle-bed.”