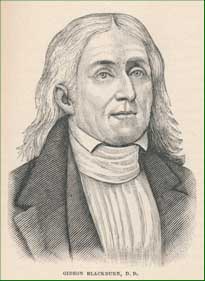 Today’s entry comes from E.H. Gillett’s HISTORY OF THE PRESBYTERIAN CHURCH IN THE UNITED STATES. I found his account of Indian missions under the Rev. Peter Bullen an enjoyable read, and hope you will too. What a picture of the cost of such missions in the early days of this country!

In 1804 the Synod of Carolina directed the Presbytery of Orange to ordain James Smylie, who had been laboring at Natchez in the Louisiana Territory, with a view to his returning thither to engage in missionary labor. This region of the Southwest, rapidly filling up after the Louisiana Purchase, was for the most part under the supervision of the Synods of Virginia and Carolina.

The way had been prepared for the labors of Mr. Smylie by that veteran in the cause of Presbyterianism at the South, Rev. James Hall, of North Carolina. In the autumn of 1800, under a commission of the General Assembly, he commenced a mission to Natchez. Two other brethren whom the Synod appointed accompanied him. This was the first in the series of Protestant missionary efforts in the lower valley of the Mississippi. The report of the mission was made to Synod in 1801, and, as published in the papers of the day, excited a very general interest throughout the Southern country. The Presbytery of West Tennessee, erected in 1810, had this field under its care; but it was not till 1815 that, by a division of it, the Presbytery of Mississippi was formed.

In 1817 this body consisted of five ministers and had under its care eight congregations. At the head of its list stood the name of the venerable Joseph Bullen, verging upon his threescore years and ten, a pioneer in the cause of Indian missions. Soon after the formation of the New York Missionary Society, it was determined to attempt the establishment of a mission among the Chickasaws of “West Georgia” and Mr. Bullen was selected as the man to conduct it. He was a native of Vermont, and had already reached his forty-seventh year when he commenced the undertaking. At New York he received his public charge from the venerable Dr. Rodgers, and set out March 26, 1799, on his journey to the Southwest. He was accompanied by his son, a youth of seventeen years, who it was thought might render important aid in acquiring the language and giving instructions as a teacher of Indian children.

His route led him through Philadelphia, where he received the friendly attentions not only of Dr. [Ashbel] Green, but of Mr. Pickering, Secretary of State, and other distinguished persons. Thence he proceeded westward, by way of Lexington, Va., to Knoxville and Nashville, Tennessee. Here he was two hundred and seventy miles distant from his point of destination, and his friends urged him to delay his journey for several weeks, in order to secure company. Such were the dangers of the way that it was quite unadvisable to attempt the journey without guides. But the zeal of the missionary would not allow him to pause. He had already had experiences of hardship, exposure to storms, and perils from swollen streams, sometimes crossing “waters almost to the horse’s back.” Unappalled by the representations made to him, he resolved to press on. “Trusting in divine goodness to direct” their way, the travelers set out for the Indian country. Their horses were encumbered with baggage, and their movements were slow. But, provided with food, blankets, an axe, and a gun, they made such progress as they were able. Their lonesome way was occasionally cheered by meeting traders from Natchez and New Orleans, returning to Kentucky. Sometimes they were impeded by the rains and the swollen streams. The waters of the Tennessee were high, and places of entertainment were few and far between. The food which they could procure was not of the best kind,—sometimes hominy or damaged meat. A bed of bear-skin was a luxury for the night’s lodging.

At length Mr. Bullen reached his destination, worn, weary, and almost an invalid. The Chickasaws he found “without any kind of religious observance, and without temple and priest,” except that a few of their enchanters had images, the use of which was little understood among the people. He preached and conversed as he had opportunity, witnessed their frolics and their “mysteries,” their “singing, yelling, and running,” gained their confidence, and, with alternate experience of encouragement and disappointment, prosecuted his work. From one town he journeyed to another, distributing his labors among the Indians and whites, and coming in frequent contact with the hundreds of traders who, after their trip down the Mississippi, returned by land to their homes. His greatest success was among the slaves, five of whom he baptized on one occasion. Daunted by no difficulties or hardships, wet, hungry, shelterless oftentimes, he labored at all seasons to prosecute the missionary work in which all the sympathies of his soul were enlisted.

Worn out with labors, Rev. Bullen returned to the North in the fall of 1800. On his way he stopped at Maryville {TN], where Gideon Blackburn ministered to a church of over three hundred communicants. The two men, kindred in missionary zeal and devotion, conferred together; and, though we have no record of the themes upon which they conversed, we can scarcely doubt, from our knowledge of the men, that the subject nearest to Mr. Bullen’s heart claimed their attention. This, at least, we know, that within a few months of that meeting, Mr. Blackburn threw his whole soul into the work of Indian missions, and pleaded their cause with a glowing eloquence in the Eastern cities, both North and South.

Mr. Bullen soon returned to his field of labor, accompanied by his family, resolved thenceforth to make his home in the Southwest. Deacon Rice, who was employed as his assistant, proved unacceptable to the Indians, who forced him to leave the country. But Mr. Bullen remained; and ere long we find him disconnected with the Indian mission, and one of the original members of the Presbytery of Mississippi,–indeed, the patriarch of the body.

At last the Rev. Peter Bullen rested from his labors and entered his eternal reward, on March 26, 1825.

Words to Live By:
“Thou therefore, my son, be strong in the grace that is in Christ Jesus.
2 And the things that thou hast heard of me among many witnesses, the same commit thou to faithful men, who shall be able to teach others also.
3 Thou therefore endure hardness, as a good soldier of Jesus Christ.
4 No man that warreth entangleth himself with the affairs of this life; that he may please him who hath chosen him to be a soldier.” (2 Timothy 2:1-4, KJV)