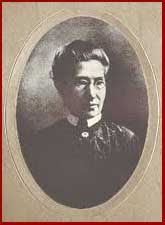 Born June 28, 1851, in Philadelphia, Pennsylvania, she attended public schools in the city. Graduating valedictorian from the Girls Normal School, he became a teacher in the public school system of Philadelphia.  During one of those classes, an unruly student threw a large piece of slate at her. Her career was cut short in teaching as the effect of that slate gave her a spinal injury. She was confined to bed at first. Eventually she was able to be partially restored, but the rest of her life was spent in great pain.

She began to study English literature at that time. That study enabled her to sing and write Christian hymns and songs.  With the help of several composers, she wrote the words for approximately seventy-one hymns.  Several of her best hymns are “More about Jesus would I know,” “My faith has found a resting place,”  “Stepping in the Light,”  “Sunshine in my soul,”  “When we all get to heaven,” “Give me thy heart, says the Father above,” and “Will there be any stars in my crown?”

Her other field of labor was still in the teaching field. She became the Sunday School superintendent at Calvin Presbyterian Church in Philadelphia. At one point, she oversaw 200 children. She was a regular contributor to “Sunday School Helps.”

She died on April 24, 1920, to receive the stars in her crown for her spiritual work, despite a life and final bed of pain.

Words to Live By:  The New Trinity Hymnal has only “More about Jesus would I know” on page 538. The blue (old) Trinity Hymnal has “Give me thy heart” on pg 723. Other evangelical hymnals will give you other favorites of Eliza (or E.E.) Hewitt. Why not join with a group of  Christians, or on Sunday evening for a hymn sing, to lend your voice to singing her  hymns of the faith? Then discuss her life, of being by God’s strength, able to write and serve the Lord despite her physical pain. It would be a profitable study.