One of the PCA”s Founding Fathers

Remember that “One Way” symbol back in the Jesus People era? It showed up on posters, on T-shirts, and just about everywhere. Well, it turns out that symbol, with the index finger pointing heavenward, wasn’t original to those times. It actually dates back to around the 1830s, when Horatio Nelson Spencer, a South Carolina native and a graduate of Yale Law School, had moved to Port Gibson, Mississippi to establish his law practice and to raise a family. He also associated with the Port Gibson Presbyterian Church, and somewhere along the way he was the one who thought up the idea of having a hand with the index finger pointing to heaven, the hand firmly fixed atop the church’s steeple. The original hand was carved out of wood, though later it was replaced with a metal hand, measuring twelve feet high, from wrist to finger tip. 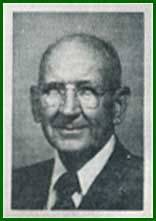 Horatio’s idea, with that silent finger faithfully pointing the way to heaven, could also be taken as expressive of the life and ministry of one of his descendants. James Grafton Spencer was born on August 22, 1904. James would grow to become a fine scholar who eventually studied for the ministry at Columbia Theological Seminary, graduating in 1933. While still in Seminary, he was licensed to preach by the Presbytery of Mississippi, and then ordained by Paris Presbytery and installed as pastor of the PCUS church in Gladewater, Texas. Between 1933 and 1942, he served six Presbyterian churches in Texas, while also  earning the Master of Theology degree at Dallas Theological Seminary, in 1939.

But for a man who is truly called of the Lord to preach the Gospel, there is no such thing as retirement. Rev. Spencer immediately took up a post as associate evangelist with the Presbyterian Evangelistic Fellowship (PEF). This organization was one of four groups that were highly instrumental in the formation of the PCA back in the 1960′s. The other three groups were The Concerned Presbyterians, The Presbyterian Journal, and Presbyterian Churchmen United. Rev. Spencer had organized seven new churches in the first nine years of his ministry. Now he desired to turn his attention entirely to the work of evangelism. He said, “Having begun in evangelism, I plan to complete my ministry as an evangelist.” And a good number of years were spent in this work, until at last the Lord called this faithful servant home, on January 27, 1998.

Words to Live By:
To read over the comments of some of the many people who were blessed by Rev. Spencer’s ministry, their words form an outline of what you would want and expect in a godly pastor:

“He was both theologically and practically sound. His presentation was never dull and his illustrations were to the point.”
“High moral integrity, deep Christian convictions.”
“He loves the Lord and the Book.”
“A man of prayer and his messages have been used of the Spirit to move and stir the hearts of men.”
“His friendliness, goodwill and love create an atmosphere that extends to the congregation.”
“His dedication to his Lord and his high regard for God’s Word were obvious.”
“Mr. Spencer held Christ before us at all times.”

Did you know Rev. Spencer? We’d love to hear from you here at the PCA Historical Center.