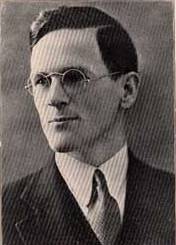 The Rev. Henry G. Welbon was a founding member in 1936 of the denomination that later became known as the Orthodox Presbyterian Church. His own convictions led him to next affiliate with the Bible Presbyterian Church in 1938. Eventually he became a member of the PCA in 1982, when the PCA received the Reformed Presbyterian Church, Evangelical Synod.

Rev. Welbon [pictured at right] had a keen appreciation for history and gathered seven notebooks of news clippings and articles covering the modernist controversy in the 1930’s. These are preserved at the PCA Historical Center as an important part of his papers.

Presbyterians of America Enjoined from Using Title
[a news clipping from a Philadelphia newspaper, dated January 18, 1937]

The name, the Judge decided, resembles too closely the name of the main Presbyterian body, the “Presbyterian Church of the United States of America.”

The fundamentalist organization was formed in Philadelphia on June 10, 1936, by the late Dr. J. Gresham Machen and a group of other clergymen and laymen. The group declared itself a “General Assembly,” with Dr. Machen as moderator and Dr. Paul Woolley as clerk. The name Presbyterian Church of America was adopted.

The parent church countered with the court action, filed by the Rev. Henry B. Master, moderator, demanding that the “rebel” group be forbidden use of the name it selected.

A special meeting of the General Assembly probably will be necessary to select a new name for the church, Dr. Woolley said when he learned of the decision. He added that an appeal “is likely.”

Judge Smith remarked that he was not concerned with the “merits of the two respective doctrines,” but added:

“It would be a serious hurt to the reputation of the plaintiff church and a detriment to its work if the defendant church, bearing a name identical or similar, should enter areas occupied by the plaintiff church in real competition with it, thereby destroying the faith of those individuals in foreign countries insufficiently versed in English to comprehend the controversy.

“The acts done and threatened to be done by the defendant church are unfair and contrary to the principles of equity and good conscience, and violate the rights of the plaintiff church to use of its name and terminology.”

The decision concluded with the remark that the defendants are no longer members of the parent church, having severed their membership “in the ancient church when they were unable to impress their will on the General Assembly of the plaintiff church. Had they been successful in their determination, there would have been no defendant church.”

Words to Live By:
Denominations exist because Truth matters. We seek to know God’s will and to live accordingly. To that end, careful study brings us to certain convictions about what the Bible teaches. But we are sinful and know the Scriptures imperfectly, so our convictions may differ from those of other Christians. On the level of honest, studied differences, division among Christians is regrettable, but necessary, if our allegiance to Truth is to be upheld. Here we can amicably continue to work toward a better understanding of God’s Word and His will for our lives.

But when is it right to divide or leave a denomination? The work of Scottish theologian James Durham is helpful at this point. In sum, he concluded that only when staying would mean having to participate in sin, only then is division appropriate and necessary. Another work on this subject, by the scholar John Macpherson, is available here and makes for fascinating reading.