It was on this day, July 2d, in 1824, that the Rev. Dr. Samuel Miller delivered what was termed an Introductory Lecture, at the opening summer session of the Princeton Theological Seminary. The title and subject of his lecture was THE UTILITY AND IMPORTANCE OF CREEDS AND CONFESSIONS. Dr. Miller had by this time been serving as a Professor at Princeton for over a decade. He was settled both in his theology and in his views of what the students must learn as they prepared for ministry in the Presbyterian Church. So, as this was his Introductory Lecture, we should most likely understand this message as one which Dr. Miller considered particularly foundational both for the  Seminary curriculum and for the future ministry of the Princeton graduates.

After presenting Dr. Miller’s opening remarks, his seven main points in support of creeds and confessions will be provided, though in their barest form and without supporting arguments, since space is limited. Much of the rest of the work will then be skipped, and we will jump to Miller’s concluding comments. If you would like to read the entire work [it’s not long—only 84 pages], there will be a link at the end of this post. 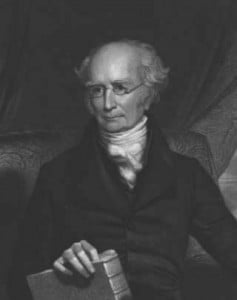 The character and situation of one who is preparing for the sacred office are interesting beyond the power of language to express. Such a one, like the Master whom he professes to love and serve, is “set for the fall and rising again of many in Israel” (Luke 2:34). In all that he is, and in all that he does, the temporal and eternal welfare not only of himself, but of thousands, may be involved. On every side he is beset with perils. Whatever may be his talents and learning, if he has not genuine piety, he will probably be a curse instead of a blessing to the church. But this is not the only danger to which he is exposed. He may have unfeigned piety, as well as talents and learning; and yet, from habitual indiscretion; from a defect in that sobriety of mind, which is so precious to all men, but especially to every one who occupies a public station; from a fondness for novelty and innovation, or from that love of distinction which is so natural to men; after all, instead of edifying the “body of Christ,” he may become a disturber of its peace, and a corrupter of its purity; so that we might almost say, whatever may be the result with respect to himself, “it had been good for the church if he had never been born.”

Hence it is, that every part of the character of him who is coming forward to the holy ministry; his opinions; his temper; his attainments; his infirmities; and above all, his character as a practical Christian;—are of inestimable importance to the ecclesiastical community of which he is destined to be a minister. Nothing that pertains to him is uninteresting. If it were possible for him, strictly speaking, to “live to himself,” or to “die to himself,” the case would be different. But it is not possible. His defects as well as his excellencies, his gifts and graces, as well as the weak points of his character, must and will all have their appropriate effect on everything that he touches.

Can you wonder, then, that employed to conduct the education of candidates for this high and holy office, we see ourselves placed under a solemn, nay, an awful responsibility? Can you wonder that, having advanced a little before you in our experience in relation to this office, we cherish the deepest solicitude at every step you take? Can you wonder, that we daily exhort you to “take heed to yourselves and your doctrine,” and that we cease not to entreat you, and to pray for you that you give all diligence to approve yourselves to God and his church able and faithful servants? Independently of all official obligation, did we not feel and act thus, we should manifest an insensibility to the interests of the church, as well as to your true welfare, equally inexcusable and degrading.

It is in consequence of this deep solicitude for your improvement in every kind of ministerial furniture, that we not only endeavor to conduct the regular course of your instruction in such a manner as we think best adapted to promote the great end of all your studies; but that we also seize the opportunity which the general Lecture (introductory to each session) affords us, of calling your attention to a series of subjects which do not fall within the ordinary course of our instruction.

A subject of this nature will engage our attention on the present occasion: namely, the importance of creeds and confessions for maintaining the unity and purity of the visible church.

This is a subject which, though it properly belongs to the department of Church Government, has always been, for want of time, omitted in the Lectures usually delivered on that division of our studies. And I am induced now to call your attention to it, because, as I said, it properly belongs to the department committed to me; because it is in itself a subject highly interesting and important; because it has been for a number of years past, and still is, the object of much severe animadversion on the part of latitudinarians and heretics; and because, though abundantly justified by reason, scripture, and universal experience, the spontaneous feelings of many, especially under the free government which it is our happiness to enjoy, rise up in arms against what they deem, and are sometimes pleased to call, the excessive “rigor” and even “tyranny” of exacting subscription to articles of faith.

It is my design, first, to offer some remarks on the utility and importance of written creeds; and secondly, to obviate some of the more common and plausible objections which have been urged against them by their adversaries.

ARGUMENT IN FAVOR OF CREEDS

I. By a creed, or confession of faith, I mean an exhibition, in human language, of those great doctrines which are believed by the framers of it to be taught in the holy scriptures; and which are drawn out in regular order, for the purpose of ascertaining how far those who wish to unite in church fellowship are really agreed in the fundamental principles of Christianity. Creeds and confessions do not claim to be in themselves laws of Christ’s house, or legislative enactments, by which any set of opinions are constituted truths, and which require, on that account, to be received as truths among the members of his family. They only profess to be summaries, extracted from the scriptures, of a few of those great gospel doctrines which are taught by Christ himself; and which those who make the summary in each particular case concur in deeming important, and agree to make the test of their religious union. They have no idea that, in forming this summary, they make anything truth that was not truth before; or that they thereby contract an obligation to believe what they were not bound by the authority of Christ to believe before. But they simply consider it as a list of the leading truths which the Bible teaches, which, of course, all men ought to believe, because the Bible does teach them; and which a certain portion of the visible church catholic agree in considering as a formula, by means of which they may know and understand one another.

Now, I affirm that the adoption of such a creed is not only lawful and expedient, but also indispensably necessary to the harmony and purity of the visible church. For the establishment of this position, let me request your attention to the following considerations.

1. Without a creed explicitly adopted, it is not easy to see how the ministers and members of any particular church, and more especially a large denomination of Christians, can maintain unity among themselves.

2. The necessity and importance of creeds and confessions appear from the consideration, that one great design of establishing a church in our world was that she might be, in all ages, a depository, a guardian, and a witness of the truth. 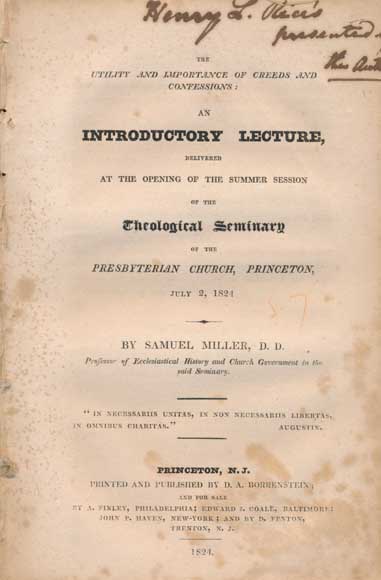 3. The adoption and publication of a creed is a tribute to truth and candor, which every Christian church owes to the other churches, and to the world around her.

4. Another argument in favour of creeds, publicly adopted and maintained, is that they are friendly to the study of Christian doctrine, and, of course, to the prevalence of Christian knowledge.

5. It is an argument of no small weight, in favor of creeds, that the experience of all ages has found them indispensably necessary.

6. A further argument in favor of creeds and Confessions may be drawn from the remarkable fact that their most zealous opposers have generally been latitudinarians and heretics.

7. The only further argument in support of creeds on which I shall dwell is that their most zealous opposers do themselves virtually employ them in all ecclesiastical proceedings.

The church is still “in the wilderness”; and every age has its appropriate trials. Among those of the present day is a spirit of restless innovation, a disposition to consider everything that is new as of course an improvement. Happy are they who, taking the word of God for their guide, and walking in “the footsteps of the flock,” continually seek the purity, the peace, and the edification of the Master’s family; who, listening with more respect to the unerring Oracle, and to the sober lessons of Christian experience, than to the delusions of fashionable error, hold on their way, “turning neither to the right hand nor the left,” and considering it as their highest honor and happiness to be employed as humble, peaceful instruments in building up that “kingdom which is not meat and drink, but righteousness, and peace, and joy in the Holy Ghost!.” May God grant to each of us this best of all honors! And to his name be the praise, forever! Amen!

To read the entire work by Dr. Miller, click here.