March 22: Minutes of the Second Presbytery 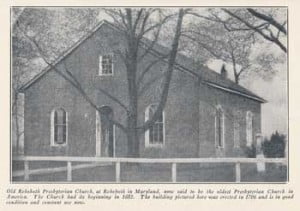 Four days ago, you read the historical devotional on March 18, where we noted that the stated clerk of the first presbytery held in this country lost all but a short paragraph of the minutes of that meeting. In 1707, beginning on March 22, the second presbytery was held in Philadelphia. George McNish, one of the seven ministers present at this second meeting, was chosen Clerk of the Presbytery, while John Wilson was chosen the Moderator.   Present also were teaching elders Jedidiah Andrews and  Nathaniel Taylor. Francis Makemie would show up on the 25th of March. Ruling elders Joseph Yard, William Smith, John Gardener, and James Stoddard were present from several churches within the bounds of the Philadelphia Presbytery.

Samuel Davis sent in his excuse as to why he missed the last Presbytery and would not be present at this meeting either. The presbyters did not sustain his reasons for his absence, and sent a letter to teaching elder Davis requiring him to be present at the 1708 presbytery meeting. He did, and they immediately elected him the moderator of the next Presbytery.

The church at Snow Hill, Maryland, had called Mr. John Hampton to be their pastor, but the latter had declined their call.  He gave several satisfactory reasons to the presbytery as to why he was not in favor of going there as pastor. They nevertheless moved that the call be left in his hand until the next presbytery in 1708, hoping that the call would be finally accepted by Mr. Hampton. In the meanwhile, they sent a letter of encouragement to the church to continue in their endeavors for a settled pastor among their ranks.

It was on the 25th of March, 1708, that two biblical sermons were given onHebrews 1:1 and Hebrews 1:2 by teaching elders Francis Makemie and teaching elder John Wilson, which messages had been approved at the last Presbytery meeting.  These texts were no doubt taken from the Genevan Bible, as that was the version carried over to these shores by the early Presbyterian pilgrims. And given the practice of early Scottish ministers, the length of the sermons easily could have been two hours long.  We are told  that both sermons were approved by the Presbytery.

Since Francis Makemie had been successful in convincing two ministers to come over and help the infant Presbyterian church previously, the Presbytery urged Makemie again to write to Scotland and a certain minister by the name of Alexander Coldin. He was to give an account of the state and circumstances of the dissenting Presbyterian interest in and among the people, especially in and about Lewistown, and signify the earnest desires of those members that Mr. Coldin travel over to these shores and become their minister.

We conclude that their meeting was not unlike the gathering of Presbyterians in presbyteries across the modern world now.  Sermons are preached, though not as long as these early expositions of the Word. Elections are held for presbyterial office.  Excuses are considered as to absences, and approved or disapproved. Pastors without call are considered for vacant pulpits. Overtures are recommended, discussed, and voted upon by the presbyters. All in all, the work of the Lord began in Philadelphia, 1706, and continues today in hundreds of presbyteries across the world.

Words to Live By:  Speaking to elders, be faithful to your presbytery meetings, for there the work of the Lord is initiated, issues of interest to the church are discussed by and for elders, warnings are heeded, encouragements are given, and support is given to the kingdom of grace.