Silent as a Tombstone; Punctual as a Clock.

The following account is drawn from The Memorial Volume of the Semi-Centennial of the Theological Seminary at Columbia, South Carolina. (1884). Dr. Leland was one of the earliest professors at Columbia Seminary. For more on Dr. Leland and the Seminary, see the recent volume by Dr. David B. Calhoun, Our Southern Zion: Old Columbia Seminary, 1828-1927, published by The Banner of Truth Trust. 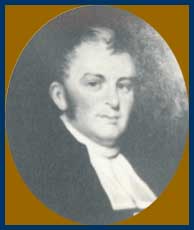 Few men could boast a nobler ancestry. The earliest of this name, historically known, was John Leland, an accomplished scholar of the sixteenth century, Chaplain to Henry VIII., and by him honored with the office of King’s Antiquary, or Royal Antiquary of England. Among his lineal descendants are found the illustrious theologian and defender of the Christian faith, John Leland, D. D., of the seventeenth century, and Henry Leland, the ancestor of the American branch of the family, who removed from Great Britain to this country about the middle of said century (the seventeenth). Aaron Whitney Leland, son of Rev. John Leland, was born in Berkshire County, Massachusetts, October 1st, 1787 and died November 2d, 1871, at the age of eighty-four years, one month, and one day.

Graduated at Williams College in 1808, he soon thereafter removed to Charleston, S. C., where he engaged in teaching at Mount Pleasant village, near that city. In June of the following year (1809), he was married to the eldest daughter of the Hon. James Hibben, of Christ Church Parish, by whom he became the father of six sons—one of whom died in infancy—and four daughters.

At what precise date his mind became impressed with the claims of the gospel ministry we are not informed. But during the third semi-annual session of Harmony Presbytery, in April, 1811, he was taken under the care of that Presbytery, passed the usual examination and trials, and, on the 6th day of the same month, was licensed to preach the gospel as a probationer. In this capacity as licentiate he served the vacant churches of the Presbytery for one year with great acceptance, and on the 2d day of May, 1812, was ordained as an evangelist. But so great was the favor with which his first efforts in the ministry were received, that he was soon called to the pastorate of the First Presbyterian church in the city of Charleston—usually called the Scotch church—and was installed pastor of the same in 1813.

In 1814 he received the honorary degree of A. M. from Brown University, and in 1815, at the early age of twenty-eight, was honored with the degree of Doctor of Divinity by the South Carolina College. For several years he was pastor of the church on James Island, in which a powerful revival of religion took place under his ministry. In that church he preached the eloquent sermons published in The Southern Preacher, in which he vindicated evangelical religion from the charge of fanaticism.

In 1833 he was called from the pastoral work and installed Professor of Theology in the Theological Seminary in Columbia, which position he filled with great fidelity and eminent satisfaction to the friends of that institution till 1856—a period of twenty-three years. In view of his advancing years, and the increased labors incident to his chair, he was then, with his own hearty approval, transferred to the Professorship of Sacred Rhetoric and Pastoral Theology, for which his taste, culture, and long experience eminently fitted him.

To the duties of this chair he devoted himself with unflagging zeal till disabled by a stroke of paralysis in October, 1863. On the 11th day of that month, while entering a store on the public street, he was suddenly stricken prostrate with paralysis, and for a time lay insensible. So soon as consciousness returned he was borne, or rather assisted, to his own home. But, punctual to his engagements, nothing could deter him from attempting to meet his duties at the Seminary. It was his turn that week to preside in the religious services of evening worship; and though the distance was considerable, he reached the Seminary with faltering and uncertain steps. “Before any of his colleagues could anticipate him, at the appointed signal which assembled the students, he entered the pulpit stand, commenced as usual by invoking the presence of God, read, as he believed, a portion of the Psalms of David, gave out a hymn, united in singing it, and then, with the tones and countenance of one wrestling like Jacob with the angel of the covenant, engaged in prayer. But in all this, though there were the usual modulation of the voice, the usual rhythm of the hymn, the wrestling earnestness of the suppliant, not an intelligible word was spoken. To all but himself it was an unmeaning jargon. The mysterious connexion between the thought and its audible sign was broken. And yet it was most solemn and impressive; for it was the mysterious intercourse of the soul with its God, in an act of direct spiritual worship.” And so through eight long years of almost suspended intercourse with his fellow-men, did he maintain unimpaired his life-long habits of religious study, meditation, and worship. The word of God was his constant companion. And thus, during these years of infirmity and suffering, his days were passed chiefly in holy employment, till God took him to his rest.

Dr. Leland was magnificently endowed with natural gifts, both mental and physical. In manly beauty, dignity, and grace, he was the admiration, in his youth and early manhood, of all who knew him; and with a mind vigorous and strong, and well stored, with knowledge, and an imagination vivid and powerful, coupled with a heart susceptible of the most intense emotion, he could attract and impress all who came within the charmed sphere of his influence. His majestic form, courtly manners, a voice which was harmony itself, and a style cultivated and fervid, made an impression on those who heard him not soon to be forgotten. As a reader of the Scriptures and sacred song in public worship, he surpassed in excellence all whom we have ever heard. “He could win the attention and charm the hearers as he read the sacred page with that fitting modulation and emphasis which interpreted it as he read, ere he opened his lips to set forth in his own often eloquent and persuasive words the truth of God.”

Dr. Leland’s chief excellence as a pastor consisted in his earnest and faithful preaching of the gospel, in his deep sympathy for the afflicted, and his eminent success in presenting to their minds the rich consolations of divine grace. At certain seasons he would become intensely moved for the salvation of souls ; and at such times his appeals to the unconverted would seem irresistible. At other seasons he would appear in his peculiar and gifted character, as “one that comforteth the mourners.”

Among his personal characteristics, which, indeed, “were known and read of all men,” a few may be briefly mentioned. First. System and order were to him indispensable in all things; nothing could atone for their neglect. Secondly. Punctuality characterised him in all things. It was the law of his life. This trait was strikingly illustrated by the fact that families living between his residence and the Seminary were in the habit of regulating their time-pieces by his passing and repassing.

In certain frames of mind, or from constitutional idiosyncrasy, Dr. Leland would sometimes remain as silent as a tombstone, when all around were in earnest conversation’. On one such occasion, when an attempt was made to rally him, his characteristic reply was : “Well, I never knew anybody to get into trouble from saying too little.” Another marked characteristic was the inflexibility of his rules in domestic government, especially as related to “worldly amusements,” and the strict observance of the Sabbath. In these, particularly in the last, he gave marked evidence of his ingrained Puritan education.

In closing this sketch it is due to the memory of Dr. Leland, as also to the history of this School of the Prophets, to allude to his devotion and untiring activity in behalf of the material interests of the Seminary he loved so well. Many of his vacations, in his earlier connexion with the institution, were spent in gathering funds for its endowment. These he obtained more from individual contributions than from general collections. And it is not too much to say that the sound financial basis of the Seminary, prior to the war, was due, in a good degree, to his efforts in this way. Well and faithfully did he fill up the days of his allotted time on earth. Whether as a pastor or as a theological Professor, he was devoted to the duties of his calling, and sought to magnify his office by a life of holy consecration to the service of God. His name is identified with the history of this noble Seminary of sacred learning, and his memory will remain embalmed in her archives for all time to come.

Words to Live By:
A strong sense of duty drives many people. That can be a good thing; but if that describes you, make sure that your duty is first and foremost to the Lord Jesus Christ, to serve and honor Him by doing His will in all else that you do throughout your life.
14