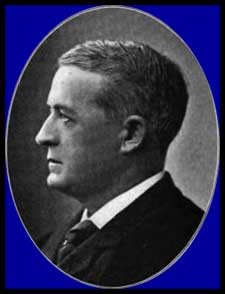 Born on May 25th, 1845 in Carrollton, Ohio, John James McCook was one of “the Fighting McCooks”, a family that had seventeen from its clan who fought for the Union. It was while  John was at Kenyon College in 1862 that he attempted to enlist, but was turned away because he was underage. So he accompanied the 52nd Ohio Infantry as a volunteer aide, and was later commissioned a Lieutenant on the XXI Corps staff, Army of the Cumberland. Promoted to Captain in 1863, he transferred to the Army of the Potomac, was wounded at Spotsylvania, and received brevet promotions for heroism to Major, Lieutenant Colonel and Colonel, at age 19 one of the youngest Civil War soldiers to attain such distinction. After the war he returned to Kenyon College, there to earn the bachelor’s and master’s degrees. He next graduated from Harvard Law School, and became a New York City attorney. He rose to become senior partner at one of the nation’s most prominent firms, was a Director of banks and railroads, and a Kenyon College and Princeton Theological Seminary Trustee, serving the latter institution from 1897 until his death in 1911. In 1892 he funded a new stadium at the University of Kansas. When his friend William McKinley became President, McCook declined appointment as Attorney General or Interior Secretary. In 1897 he led a syndicate that nearly annexed Cuba by paying its debt to Spain, an action that might have averted the Spanish-American War. Active in the Young Men’s Christian Association (YMCA), during that war he was Chairman of the Army and Navy Christian Commission. The village of McCook, Illinois, and McCook Street at the University of Kansas are named for him. His death came on September 17, 1911, while residing at his summer home, Sea Bright, in Monmouth county, New Jersey. 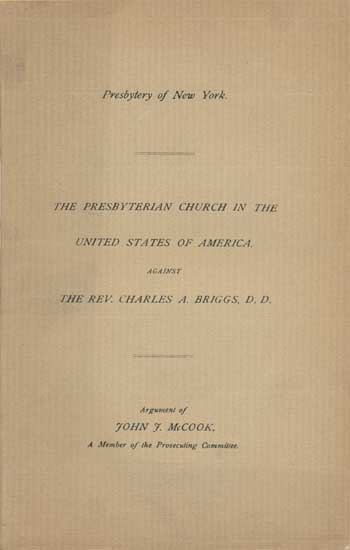 One of Mr. McCook’s greatest services to the Church may have been his work in conjunction with the heresy trial of the Rev. Dr. Charles Briggs.

Among the several published works in conjunction with that trial, the PCA Historical Center recently acquired a copy of The Presbyterian Church in the United States of America, against The Rev. Charles A. Briggs, D.D. — Argument of John J. McCook, A Member of the Prosecuting Committee. New York: John C. Rankin Co., Printers, 34 Cortlandt St., NY, 1891. Pb, 49 p.; 23 cm.

From the Introduction to McCook’s Argument:

“Before bringing charges of heresy against a minister of the Presbyterian Church, it is necessary to determine, first of all, whether his doctrines diverge from those of the Standards within legitimate limits, and do not affect the system of doctrine in which belief is required; or whether the error of his doctrines is vital and essential. While it is true that many ministers do not subscribe to the ippissima verba of the Confession, readers of ordinary intelligence can have no difficulty in determining whether their divergence from the doctrine of the Standards is vital or not. A trial for heresy is not in its essence a trial of a man, but a trial of a doctrine or of doctrines. It becomes the trial of a man only when he, with full knowledge of the divergence of his views from the Standards of the Church, still remains in the ministry, and thus violates his ordination vows.”