[A tribute written in 1999 by Dr. Mark R. Gornik, upon Dr. Conn’s death. We are grateful to Dr. Gornik for granting permission to reproduce this tribute here today.]

He had a face turned to the city and a heart broken by the things that break the heart of God. A few days ago, Harvie Maitland Conn, pastor, missionary, seminary professor, theologian, and missiologist, completed his earthly urban pilgrimage. The cause of his death on August 28, 1999 was cancer.

From his 12 years as a missionary in Korea to his 25 years of teaching at Westminster Theological Seminary (WTS) in Philadelphia (1972-1998), Harvie Conn left a singular legacy of calling the church, especially the Reformed and evangelical communities, to Christ’s mission in the city.

It was quite possible to overlook Conn’s preceding 12 years of mission work in Korea, but only until you saw the list of books he wrote in Korean or heard him teaching in homiletics class in Korean. In Korea, his outreach to women in prostitution signaled his concern for an evangelism that saw people as both sinners and sinned against.

Dr. Conn joined the faculty of Westminster in 1972 and taught apologetics and missions. His concern for missions eventually became his full-time academic focus. As a teacher admired for his engaging pedagogical style, students also considered him among the most demanding.

In his teaching, Conn forged a transformational theology of the church and mission. Working with Reformed themes such as covenant, kingdom, and redemptive-history and in dialogue with Reformed theologians such as Geerhardus Vos, Herman Ridderbos, Richard Gaffin and Edmund Clowney, Conn developed a doctrine of the church that, if implemented, would bring renewal to existing ecclesial models and the social context.

While committed to the traditions of the Reformed faith, Conn’s vision of the church was much broader. He firmly believed in the global church as a subject and not a Western object, and this influenced his theologizing. 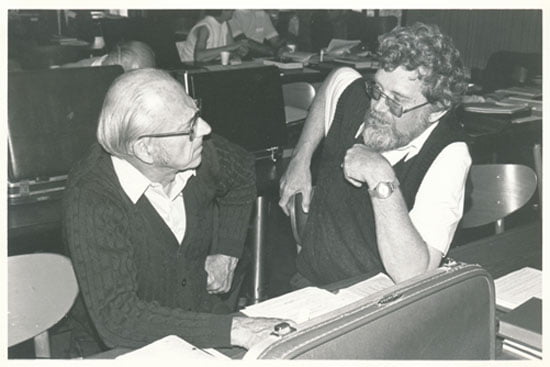 Above, Rev. Harvie Conn, at right, speaking with the Rev. Edward Kellogg during a conference break.

Much of Conn’s legacy is to be found in a considerable body of writing and editing. He was the author of a number of pacesetting books including Eternal Word and Changing Worlds: Theology, Anthropology, and Mission in Trialogue (1984). A Clarified Vision for Urban Mission: Disspelling the Urban Stereotypes (1987), and The American City and the Evangelical Church: A Historical Overview (1994). We await the publishing of The Kingdom, the City, and the People of God, co-written with Westminster colleague Manuel Ortiz. [This volume appeared in 19 .]

Conn also edited books on church planting and church growth, as well as pastoral theology and hermeneutics. The most recent volume that he edited [was] entitled Planting and Growing Urban Churches. From Dream to Reality (1997), a study made especially valuable with his section introductions.

During his time at Westminster, Conn played a significant role in leading the faculty’s commitment to what was to become the Center for Urban Theological Studies (CUTS), an effort founded by African American pastors and Bill Krispin. His contact with the students of CUTS continually shaped his thinking about ministry and theological education, just as he helped to shape women and men for the ministry.

Conn’s most enduring missiological contribution was his concentration on the importance of the city. He wanted the church to focus on the city not because it was trendy—it was not—but because he read closely both the biblical material and the demographic data, bridging them together with a focus on a third horizon, God’s mission to the cities of this world.

No longer, Conn argued, could the world be considered a global village. Instead, it is a global city. This is the church’s context and challenge, and to be effective, the church would need to sort out urban myth from fact. He not only helped to put the city on the evangelical agenda, but he changed the way we think about the city. In light of new understanding of the city, he pressed heavily for church planting and the developments of models that pointed to God’s future.

His theology of the city was drawn from a redemptive-historical or narrative framework to Scripture. When asked his “favorite” biblical text on the city, Conn replied,

“Picking one biblical text to sum up my view of urban ministry is an assignment too awesome and dangerous for me. Too awesome because wherever I turn in my Bible it shouts “urban” to me. Too dangerous because the text I might select could leave out a piece of the picture too crucial in another text and distort the whole. We need a hermeneutic serious enough to link Genesis to Revelation in the unending story of Jesus as urban lover and the church as God’s copycat.”

In many respects, Conn was driven by a concern for what he saw in Paul as a special concern for the “outsider.” This is evident from the way in which he engaged Latin American liberation theologies, North American black theology, and a variety of feminist theologies. While his criticisms were not insignificant, he saw in them a profound challenge for the evangelical church to recover the holism of the gospel.

Conn often wrote sentences like “Jesus loved the leftovers and left outs, and so should we.” This quote reflected his Christology: Jesus was the poor one who embodied the jubilee in all of its holism for the city.

Christology and urban mission, word and deed, belonged together for Conn. Features of how this played itself out are evident from this quote taken from Eternal Word and Changing World :

“Theology, if it is to become truly and comprehensively communal, must emerge from a praxis of commitment to God’s peace for the poor (1 Cor. 1:27-28). To become revolutionary and not revolutionary, our theologizing will have to validate itself and its claims in the same way Jesus validated His. His allegiance to the poor marked His preaching and was a sign of the coming of the kingdom (Luke 4:18-21). His healing of the sick and the blind and his preaching to the poor became a validation to a doubting John the Baptist of his messsianic theologizing (Matt. 11:2-6). It must become an integral part of ours as well. Where shall we begin this identification? By sitting where the poor and disenfranchised sit, in the ghettoes of our cities, in the waiting rooms of public health clinics, in the unemployment lines and welfare offices.”

One finds no better summary of what Conn took to be the obligations of the kingdom than the title of his book, Evangelism: Doing Justice and Preaching Grace.

Dr. Conn had several distinctive and memorable traits. One example was his, at times, frustrating propensity to work alone. Perhaps this was a result of the many frustrations he faced as an advocate for new ways of seeing and thinking about following Christ.

He was well-known for his sense of humor and hearty laugh. While a student at Westminster, I never looked for him in the library, but rather I listened for his laugh over by the periodical section. To paraphrase Langston Hughes, Conn’s laugh was like a handshake heard across the room. It was welcoming and inviting. Perhaps he was laughing at his own jokes, but that was always the best reason to laugh along.

Conn kept personal struggles such as his health very private. When he and his wife Dorothy’s poor health finally necessitated his retirement from Westminster, Conn wanted no attention drawn to his career. That was quite consistent with his character, but a disappointment to many who very much wanted to express gratitude for his influence. Never a credit taker, he always pointed away from himself and to the Christ he followed. In a Christmas letter from some years ago, he wrote: “Over forty years ago, Dottie and I chose the path of the wise men and followed His star. We have been Jesus-stargazers ever since. . . He still goes before; we still follow—not always wisely, not always obediently. But always hopeful.”

Conn loved to conclude his sermons, essays, books, and lectures with a barrage of questions. The motive for this format might have been to exercise his prophetic ministry in a less direct way. Or perhaps it was his way of saying he was helping to set an agenda, not resolving it. Probably both, and with a nod to Christ’s style in the gospels.

Here are some questions that a celebration of his life and legacy requires:
Will the church heed the Lord’s call to the global city of the next century and beyond?
Will theological education rise to the challenge?
Will we allow missions to be the guide for our theological agendas?
And in all of this, what about the poor and the excluded?
Will the church change for the sake of a gospel that is good news for the poor?

At heart, Harvie Conn was an urban evangelist who proclaimed sovereign grace so that the “world may believe” (John 17:21). His passionate focus on the gospel for the city called many, including me, to see the city as the primary site of Christ’s mission. May the witness of Conn’s Jesus stargazing in the city influence our lives so that we might faithfully proclaim and live for the One whom he followed.

[Rev. Gornik now served as Director of the City Seminary of New York.]