On a few rare occasions this year we will revisit a post from last year, particularly when time is short and other demands take precedence. Last March 4th, we looked at the life and ministry of an OPC missionary to Japan, the Rev. R. Heber McIlwaine, and I think this post is well worth a second look. 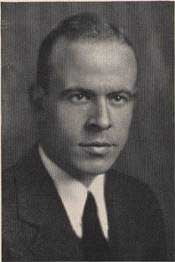 Born Reginald Heber McIlwaine on July 7, 1906 of Southern Presbyterian missionary parents in Kobe, Japan. Heber, as he was known to family and friends, was a natural for missionary service. Coming to a knowledge of Christ as Lord and Savior in his younger years, he learned about Japan and the language of Japan early.  In fact, so accustomed was he to this foreign land that one said of him that he may have been an American on the outside, but he was a Japanese on the inside. Graduating from Westminster Theological Seminary in the early years of that historic theological school, he first became an assistant to the Rev. Clarence Macartney at  First Presbyterian Church in Pittsburgh.  But the missionary call was too strong in his  nature to remain there more than two years.

He was appointed by the Independent Board for Presbyterian Foreign Missions to serve in Japan, and did so from 1934 – 1936.  Joining the new Presbyterian Church of America in 1936, and was sent next to Harbin, Manchoukuo. Choosing to remain with the PCofA in 1937, he became one of the first foreign missionaries appointed by their Committee on Foreign Missions.  In 1938, he was sent to Japan, but the rising war clouds forced him to return back to the States, where he served as a pastor and Army chaplain. From 1947 to 1950, he ministered to Japanese aborigines in a mountainous area of Taiwan. Finally, in 1951, he returned “home” to serve full-time as a missionary in Japan, and did so until his retirement in 1976.

After friends had thought he would remain a bachelor the rest of his life, R. Heber McIlwaine surprised everyone and married Eugenia Cochran on March 4, 1947. It was said of her that she was almost as “Japanese” as he was. At any rate, they would serve together for twenty-five years in Japan.

Most of their service was at their home in Fukushima, north of Tokyo, Japan. For those who judge success by numbers, their ministry was not successful. The average number of worshipers was under twenty. But many of those converts from paganism to Christianity moved elsewhere for employment or service, taking their Christian commitment with them. The Reformed Church of Japan was, in the words of John Galbraith, “greatly enriched by” their ministry.

Both were to be translated to heaven in the latter years of the twentieth century. Certainly it can be said that their works continue to follow them in the faith and life of Japanese Christianity.

Words to Live By:  Faithfulness to the gospel is the only rule of success in the kingdom of God. It is the world which measures success by numbers, by growth, and by economics.  When that formula is brought into the church, not only does God withhold His blessings, but many faithful men and women are marginalized from the service of the Lord Jesus.  Let kingdom work be measured by kingdom standards, that is, those of the Bible.