January 5: The Place of Preaching 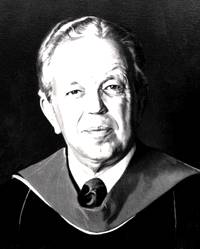 It was on this day, January 5, 1990, that the Rev. Dr. Robert Gibson Rayburn died. Dr. Rayburn had most notably served as the first president of the Covenant Theological Seminary, from its inception until 1977. Previously he had served as president of Highland College, Pasadena, California, as an Army chaplain, and as pastor of churches in Nebraska, Texas, Illinois and Missouri.

The following message is excerpted from Koinonia: The Organ of the Presbyterian Theological Seminary, Roorkee, U-P, India, vol. 4, no. 2 (April 1978), pages 1-3.

The Place of Preaching

I would like to go a step beyond Dr.Lloyd-Jones’ statement and say that not only for the Christian minister, but also for every individual Christian the preaching (proclama­tion) of the Word of God itself is, next to his worship, his primary task.

We live in a day when evangelicals are placing more and more stress on the social implications of the gospel. One cannot read the Scriptures without agreeing that those implications are there. But such implications do not give us the direction for our primary emphasis.

Our Lord Himself has given us the great example and pattern for our lives. He was deeply concerned with the physical and material need of men. He performed many miracles of healing.  He never ignored the physical needs of those who came to Him for help.  But He did not come to heal the sick, to open the eyes of the blind, or to give soundness to the limbs of crippled men. He came to save the lost.  His own words were:  “The Son of Man is come to seek and to save that which was lost” (Luke 19 : 10). That which He considered primary is clearly evident when the four men brought their sick friend to Jesus and let him down through the roof of the house. The Lord was preach­ing there; He was undoubtedly preaching about saving faith in Him. When He saw the faith of the four men His first words to the paralytic were, “Son, your sins are for­given.” This was the matter of first impor­tance. Then, however, when questioned by the scribes about His power to forgive, He said, “That ye may know that the Son of Man has authority on earth to forgive sins…” He said to the paralytic, “I tell you, get up, take your mat, and go home,” and the man was healed.  Salvation was first; healing second.

Not only, however, do we learn of the primacy of preaching from our Lord. It is evident in ths lives of the Apostles, and also in the practice of the early Church. As soon as the Apostles were filled with the Holy Spirit on the Day of Pentecost they began not to heal the sick nor to aid the poor, but to preach the gospel of salvation. Peter’s great sermon on that occasion is preserved for us in part. It must be pointed out that as soon as people began coming to Christ and being converted by the thousands, the authorities did everything they could to stop these men from preaching.  There was not a word of complaint about the miracles of healing they had performed.  Thev were forbidden to preach!  “Speak no more henceforth in His name” (Acts 4:18 and 5:40)

In Acts 8 we read that there was a great persecution. This came, of course, because of their preaching! Then they were all scattered, except the Apostles, and “they that were scattered abroad went everywhere preaching the Word”. This was not the Apostles; it was the company of believers. They were not preaching in a formal way from a pulpit as our pastors do today. Theirs was the kind of preaching which every earnest Christian is responsible to carry on.

We speak a great deal about witnessing today. We usually mean giving our own personal testimony concerning the Lord’s work in our hearts. This is important, but something more than this is before us in Acts 8. The believers were telling the good news of salvation through Christ. Every one of us must be equipped to convey clearly and forcefully the message from God which we call the gospel.

It is not enough for us just to study the Bible and learn what its message is. To understand its fulness requires a lifetime of study. But the very heart of the message is the divine program of redemption, of salvation from sin through the death and resurrection of Jesus Christ. To preach this message clearly, simply, appealingly, accurately and faithfully is the responsibility of every believer and we all should make sure we are prepared for this high task. True preaching ought not only to instruct the hearers in Biblical truth, but it also should bring men and women face to face with their own need in the light of the realities of sin and guilt, salvation and eternal  life and then it should appeal to them to trust God and obey Him. Many who read these words will never be called of God to be professional preachers.  However, if you are a true believer and are obedient to Christ you will have a great desire to obey Him with respect to preaching the gospel and you will take steps to perfect your knowledge of and ability to declare the gospel.

If you are concerned to please God in your preaching you will be careful to make your preaching pre-eminently evangelistic. By this I mean that you will be continually presenting a Saviour to sinful men. No ordained minister has a nobler function than this. Jesus came to save sinner’s, to preach the gospel to the poor. To be evangelical one does not need to be traditional, but he must be informed and intelligent.

Remember that the Gospel is not a nice message for some men. It is an absolute necessity for all men! Why? Because of human sin, sorrow and suffering, not because of social inequalities and the frustrations and failures of human relationships. That which is behind all social problems of every age is sin. The message that we preach then must be a message which offers salvation from sin. We do not need to prove that there is sin in the world. Conscience, experience, and history prove that well enough. What is necessary, however, is convincing men who want to deny it that their own sinfulness is so severe that their only hope is receiving the salvation God has provided through the shed blood of His Son.

In trying to convince men of their sin it is not wisest to pick out such sins as drunken­ness, dishonesty and adultery to get men to see their personal sinfulness. Emphasizing such sins may leave some without any sense of guilt. What we must show men is the secrecy, the subtlety of sin, its ability to appear attractive and harmless. Our Lord’s most severe words were not addressed to the drunkards nor to the adulterers, but to people who were respected for their outward moral­ity and religiousness, while their hearts were unclean. To be more concerned with per­sonal success, prosperity and pleasure than bringing glory to God, that is sin! To harbor in our hearts attitudes of antagonism and animosity for others, and a willingness to see them lose out if we can gain by their loss, this is evil! Anything which is contrary to the holy character of God is sin.

Of course, if we are to be truly evangelical we must be able, having aroused men to a consciousness of sin, to make clear and win­some the nature of salvation by showing them the love of God the Father and the grace of the Lord Jesus Christ. Because man is a helpless, hopeless sinner, salvation, if it is a true and adequate salvation, must make him right with God. If he sees himself in his sin he must also see how completely God has provided the remedy for his sin through the blood of His Son.

If you are going to be faithful to your task of preaching the Gospel, a few worn cliches will never serve adequately to present to dying men the wonders of God’s great salvation. May you give yourself whole­heartedly to the task of being prepared to preach with power.