Elisha Pope Swift was born in Williamstown, Massachusetts on August 12, 1792. His parents were the Rev. Seth and Lucy Elliot Swift. His father was pastor of the Congregational Church of Williamstown. Through his mother he was descended from Rev. John Elliot, the Apostle to the Indians. Elisha received his collegiate education at Williams College, in Massachusetts, and his theological education at Princeton Seminary. 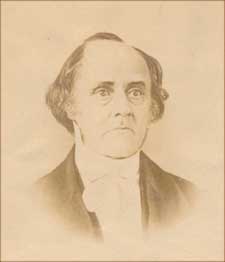 He was licensed to preach by the Presbytery of New Brunswick, on April 24, 1816 and was ordained by a Congregational council in Boston on September 3, 1817, with a view to setting out for foreign missionary work. However, the American Board of Foreign Missions was compelled to delay his departure and so employed him for a time as an agent in the raising of funds. In 1818, Rev. Swift served as pulpit supply for several Presbyterian churches in Dover and Milford, Delaware, and then in 1819 he answered a call to serve as the pastor of the Second Presbyterian Church in Pittsburgh. Here he continued to serve for thirteen years.

From 1831 to 1835, he served as Secretary of the Western Foreign Missionary Society, which was at that time located in Pittsburgh, and it was only in 1833 that he resigned his charge as pastor of the Second Presbyterian Church, in order to more fully devote himself to the work of missions. Rev. Swift had been the leading force in organizing this Society, and it was greatly shaped by his character and ministerial gifts.  By its location, the Society was fathered along by the Synod of Pittsburgh, and after several changes, both in title and in location, the Society eventually became the Board of Foreign Missions of the Presbyterian Church in the U.S.A.

In the summer of 1835, Dr. Swift resigned his position as Secretary of the Missionary Society and became the pastor of the First Presbyterian Church in Allegheny, Pennsylvania. He then served this church for twenty-nine and a half years. In the last five years of his life, with his strength beginning to fail, the congregation called Dr. Swift’s son, Elliott E. Swift, to serve alongside his father. This arrangement allowed Dr. Swift to preach as he was able, up until about six months before his death. At last, on April 3, 1865, the Rev. Elisha P. Swift passed from his earthly labors and entered his eternal rest.

“Dr. Swift was an unusually eloquent and impressive preacher. His large, penetrating eye, when fixed upon the hearer, gave to some of his searching addresses an almost irresistible power. In the commencement of his morning discourses he was usually deliberate, occasionally hesitating, as the result would show, for the most suitable and expressive words at his command. As he advanced, however, his delivery would become more rapid, and for fifteen minutes before he closed he would hold the listener in the most fixed and solemn attention. The conclusions of many of his sermons were among the grandest specimens of effective pulpit oratory to which the people in the region where he lived had ever listened. His public prayers were remarkable for fluency of utterance, comprehensiveness of petition, elegance of style and fervor of feeling. This, no doubt, has its explanation in his habits of private devotion. For many years he had four seasons of secret prayer, which he sacredly observed each day. Often, on Sabbath evenings, after his labors were completed, he would spend long periods in the retirement of his study, in audible intercession for his people. Dr. Swift belonged to a race of men now seldom found, but sometimes read about in the annals of the past.”

For Further Study:
E.P. Swift on the Call to Missions—
Among his several published efforts, Dr. Swift wrote an introduction to a Memoir of Mrs. Louisa A. Lowrie, of the Northern India Mission (1837), which is available online, here. The first several paragraphs of that introduction make for interesting reading, though the nineteenth-century prose may take some getting used to.—

“Man is, in himself, a lost, ruined and perishing sinner. Of this fact, the world is full of the most convincing evidence. The Bible professes to reveal to us God’s true and only system of salvation. This is a dispensation of life to guilty man through a Mediator, and it is also a distinct practical principle of the heart and life, developing itself by the production of a free self-consecration of its recipients to the glory of God and the well-being of mankind. Its vital power–its ascendancy over the inner man, in the production of pure and holy principles and actions, is an essential evidence of one’s interest in its blessings, while the most abundant and convincing manifestations of it to others becomes the surest way by which its great Author is honored and the world improved. Hence the lives of devoted Christians become useful and instructive, just in proportion as they are truly and wisely conformed to the great pattern, and the examples and biographies of eminent believers stimulate the pious in the path of duty, and impress the consciences of the wicked with a sense of their criminality.

“Periods of great trial and persecution in the world; and seasons in which God has, by His providence, especially called forth the visible power of religion, or remarkably poured out His Spirit upon the earth, for its increase, have been most distinguished for the development of the Christian principle. The present state of the world is peculiarly favorable to its useful display in judicious and disinterested efforts to bring millions of benighted and perishing sinners into the kingdom of God. The temporal and eternal benefits which the gospel can impart to the heathen are beyond all computation; and the Bible, while it urges the duty of its immediate dissemination, pledges its own veracity for the certainty that it shall eventually overspread the world. The events of providence are now more and more distinctly every year indicating the near approach of that joyful consummation.

“The labor and the self-denial, however, which a personal engagement in the missionary service in foreign lands requires, is so great, and the zeal of the disciples to spread the triumphs of the cross among remote and barbarous tribes of men is so small, that it must be long indeed before such a result can be anticipated, unless there is a very great increase of the true heroic and enterprising spirit of primitive times. Whatever tends to promote this, and to deepen the longing-desires of the visible family of God that His “kingdom may come” and His “will be done” in the “dark places” of the earth, should be earnestly encouraged. There are therefore three ends which may be proposed in the act of consecration to the work of Foreign Missions. This may be chosen like any other form of Christian action, to exemplify the practical influence of real piety—or, from a desire by a sincere and cordial and self-denied example of this sort, to aid and countenance the important and too much neglected duty of carrying the gospel to the heathen, or finally from the hope of a direct and immediate usefulness to the heathen themselves. The two former of these objects will be attained wherever love to Christ and holy principle is the moving cause, however brief or disastrous may be the effort itself. It is a great mistake therefore to suppose that the great moral ends of the undertaking are defeated, when the heralds of Christianity are cut down by the stroke of death before they enter upon the work; or where no actual conversions have been made. This would be to make the value of every effort to glorify the Redeemer to depend upon the measure of success which attended it, and imply a course of reasoning manifestly incompatible with fact.

Image source: The photograph, above right, is scanned from an original preserved at the PCA Historical Center. It was found tucked inside an 1858 pamphlet which had been purchased from a bookseller in Philadelphia.