Finding nothing of national importance in historic Presbyterianism [you should always feel free to remind us of important people or events], we turn to Shorter Catechism 22 for our devotional today.  It asks the question of the manner of the incarnation of Christ.  In answer, our Westminster divines state, “Christ, the Son of God, became man, by taking to himself a true body and a reasonable soul, being conceived by the power of the Holy Ghost, in the womb of the Virgin Mary, and born of  her, yet without sin.” 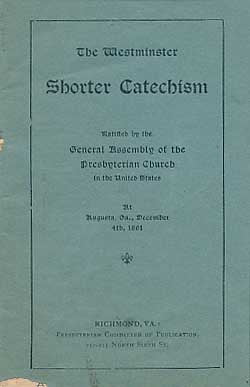 While not a historical event in American Presbyterianism, still the contents of this answer sum up the battle in Presbyterianism in the early nineteen twenties and thirties between the theological conservatives and liberals.  Was Christ the Son of God?  Was He conceived by the power of the Holy Ghost?  Was the Virgin Birth true?  All these were issues fought in the proverbial trenches of seminary class rooms and pulpits across the land.

This answer sums up biblical Christianity regarding the incarnation of Jesus Christ.  He, being the Son of God, became man “by taking to himself a true body.”  An ancient heresy was behind the inclusion of these words in this phrase.  Docetism in the early church taught that Jesus took to Himself only the appearance of a body.  Believing that all matter was essentially impure, they taught that our Lord’s body was not and could not be real flesh and blood.  John the apostle fought against this heresy when he wrote in 1 John 4:2, 3 “By this you may know (perceive and recognize) the Spirit of God: every spirit which acknowledges and confesses [the fact] that Jesus Christ (the Messiah) [actually] has become man and has come in the flesh is of God [has God for its source.]  And every spirit which does not acknowledge and confess that Jesus Christ has come in the flesh [but would annul, destroy, sever, disunite Him] is not of God [does not proceed from Him] is not of God [does not proceed from Him].  This [nonconfession is the [spirit] of the antichrist, [of] which you heard that it was coming, and now it is already in the world.” (Amplified)  The inspired apostle John says clearly that Docetism is heresy.  Our Confessional fathers state that the incarnation or the taking upon Himself a true body is biblical.

He has also taken upon Himself “a reasonable soul.”  Again, unless we have the  struggles of the early church in our mind and hearts, we will not understand the importance of this phrase.  This clause in the catechism was added due to the false teaching of Apollinaris.  He and his followers falsely suggested that Jesus had a body, but not a soul. They could not accept that Christ had human affections and a human will.  Yet every page of Scripture testifies of the reality of our Lord’s humanity.  He could rejoice and He could sorrow.  He could show compassion on the sheep without a shepherd. He had a human will distinct from a divine will, so that He could say with respect to the Father’s will regarding His atonement, “Not my will, but Thine be done.” (KJV – Matthew 26:39)

Then, we have the phrases in catechism number 22 which states, “being conceived by the power of the Holy Ghost, in the womb of the Virgin Mary, and born of her.”  These two phrases spoke loud and clear regarding the disbelief which was present in the Auburn Affirmation of 1924.  It is why J. Gresham Machen wrote his classic book, “The Virgin Birth of Christ.” Both Matthew 1 and Luke 1 both speak of the supernatural birth of our Lord and Savior.

We cannot miss the last phrase which states, “and yet without sin.”  He escaped being defiled with original sin by being born of the Virgin Mary by the Holy Spirit.  He who knew no sin, became sin for us, as our sins were imputed to Him.

Words to Live By: A memorization of this catechism answer will keep you in the faith and keep you from departing the faith.

Through the Standards: The degrees of sin

WSC 83 — “Are all transgressions of the law equally heinous?
A. Some sins in themselves, and by reason of several aggravations, are more heinous in the sight of God than others.”