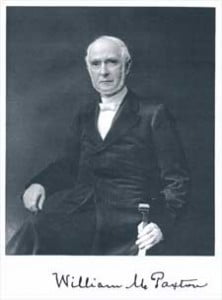 …”I well remember,” he has told us himself, “that when I was a student, no young man could pass through his first year without being constrained to reexamine his personal hope and motives for seeking the sacred office.” No doubt this is primarily an encomium upon the pungency of the religious training of those four great men under whose instruction he sat—Drs. Archibald Alexander and Samuel Miller, Drs. Charles Hodge and Addison Alexander….One of the things Dr. Paxton always congratulated himself upon was that he had had a double training in theology. “The class to which I belonged,” he tells us, “heard” Dr. Archibald Alexander’s “lectures upon Didactic Theology as well as those of Dr. Hodge. Dr. Hodge gave us a subject with massive learning, in its logical development, in its beautiful balance and connection with the whole system. Dr. Alexander would take the same subject and smite it with a javelin, and let the light through it. His aim was to make one point and nail it fast. I always came from a lecture with these words ringing through my mind, “A nail driven in a sure place.”