You are currently browsing articles tagged Marquis of Argyle. 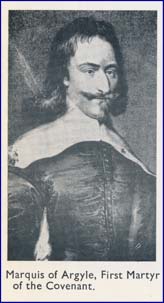