19 May, 2015 in Uncategorized by davidtmyers | No comments

He Kept the Faith 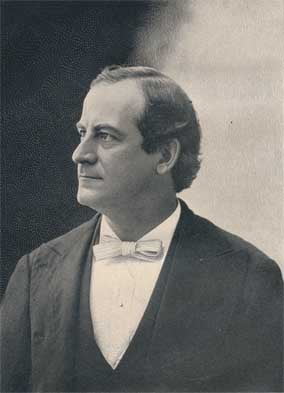 Mention the name of William Jennings Bryan, and most students of history will first think of the Scopes Trial and Clarence Darrow.  And our historical figure featured on this day was involved in that trial about whether evolution could be taught in a Tennessee school.   But this blog is about historic Presbyterianism in America.  And the truth is that William Jennings Bryan was a  member and ruling elder in the Presbyterian Church U.S.A.

Born in Salem, Illinois on March 19, 1860 to Christian parents, William at first attending Methodist  and Baptist churches.   Eventually, he went to a Cumberland Presbyterian Church in the area.  It was at age 14 when he attended a revival and gave his heart to Jesus.  He stated that this was the most important event of his life. Later, he would transfer his membership to the Presbyterian Church, U.S.A.

Trained as an attorney, he married Mary Elizabeth Baird in 1884. She was also an attorney, and for a while, they practiced the law profession.  Various political issues brought him to the forefront.  He would run for president in 1896, 1900, and 1908 on the Democratic platform.  Twice, he served in Congress from Nebraska.  He even served at Secretary of State under President Woodrow Wilson, but resigned when American headed for World War I.

There are a number of political “firsts” which originated by Bryan.  At a time when political people stayed at home when running for president, he instituted the first national speaking tour.  He was the “first” to campaign in a car.  But none of these innovative ways to “do” politics won him any national  elections.

There came a time when, in looking at his efforts in the political realm, he realized that his true calling of life was in the spiritual sphere.  As a Presbyterian ruling elder, he began to see the increasing higher criticism of the Bible in Presbyterian churches.  He saw a watering down of the historic Christian faith in the missions arm of the Presbyterian church.  He saw  Darwinism, or evolution, which he characterized one as a “string of guesses” about the origin of the world, and mankind, take hold in Presbyterian colleges.  Campaigning to become the moderator of the General Assembly in 1923, and thinking that he could turn around this downward departure from the faith,  he was defeated even for that post of influence.

Two years later, he was cast as the great defender of fundamentalism at the Scopes Trial against the high school teacher who wished to teach evolution in his class.  While he technically won, even though it was reversed later, he died five days afterwards in his home.

Buried in Arlington National Cemetery, his gravestone reads, “He kept the faith.”

Words to Live By: We need to beware that a passion for politics or any other sphere of life on this earth does not divert us from our passion for biblical Christianity, first and foremost.  Jesus said, “Seek first the kingdom of God, and his righteousness.”

Caveat Emptor (“Let the buyer beware”) : If you’ve ever watched the movie “Inherit the Wind”—the Hollywood version of the Scopes Trial—remember that not everything is as it seems. An interesting exercise is to get a copy of the trial transcript, easily obtainable through interlibrary loan, and  compare that content with the movie. It is remarkable how far Hollywood strayed from the accurate account of what actually happened during the trial.