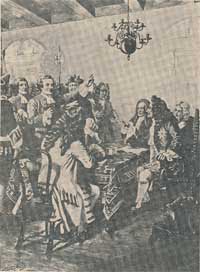 April 21 was an important date in 1649 for the Reformed faith in the colony of Maryland.  Originally, Maryland was a colony established as a refuge for English Catholics. But as more non-Catholics came into the colony, and indeed it became a Protestant colony, the Maryland Assembly on this date established the Maryland Toleration Law, or as it is sometimes known as The Act Concerning Religion.

What it did was to mandate religious tolerance for trinitarian Christians. That adjective “trinitarian” is important. If a citizen of the colony denied the deity of Jesus Christ, for example, then the punishment was seizure of their land, and even death.  Thus Unitarians, or Jews, or atheists were threatened by this law. It was meant more so as a protection for the Roman Catholics as it was for the Protestants, and specifically the Reformed faith.

It wouldn’t last long on the books, being repealed in 1654 by Oliver Cromwell’s influence upon the colony, and specifically the Anglican Church. It would be returned to the law books, but then repealed forever in 1692. It is interesting though that a part of it was found in the First Amendment of the U.S. Constitution, which states “Congress shall make no law respecting an establishment of religion, or prohibiting the free exercise thereof; or abridging the freedom of speech, or of the press; or the rights of the people peaceably to assemble, and to petition the Government for a redress of grievances.” The phrase “the free exercise thereof,” comes from the Maryland Act of Toleration.

What interests us in this Act of Toleration is that it allowed “the father of Presbyterianism” in the colonies, Francis Makemie, the freedom to preach in Maryland. Arriving in the Maryland colony in 1683, he didn’t have to seek permission from the governor of the colony to proclaim the richness of free grace. Further, those of the Reformed faith who were driven out from the Virginia Colony’s control by the Anglicans, could come to Maryland to practice their Reformed faith. Makemie went on to establish several Presbyterian churches in Maryland.

Words to Live By:  This same Francis Makemie didn’t let state laws prohibit him from preaching the gospel. (See January 21 historical devotional) He was willing to go where the Holy Spirit led him to proclaim the unsearchable riches of God’s grace, regardless of the state law. But when the liberty of the state enabled him to go, he didn’t “let the grass grow under his feet” in  sharing the good news of Christ, and Him crucified. Let us not let the fear of man’s face hinder us in sharing what Christ has done for us.