January 25: The Lottery in Louisiana

Benjamin Morgan Palmer, who was born on this day, January 25, in 1818, served a long pastorate in the city of New Orleans and had a fruitful ministry there. His was an important voice in the larger community outside the church, as well. When gambling interests sought to re-establish and continue a lottery in that city, he spoke against it. What follows is the report of Rev. Palmer’s efforts, as found in C. W. Grafton’s history of Presbyterianism in Mississippi. The title of this chapter in Grafton’s history is a bit misleading in that, of course, the lottery was not something sponsored by the Synod of Mississippi, but rather was a grievous concern occurring within their borders.
[Note: Grafton’s work was never published, but we are pleased to have a photostatic copy of  the original typescript here at the PCA Historical Center, received by the kind donation of the Rev. Vaughn Hathaway.]

Chapter 24
Lottery in the Synod of Mississippi

At the very beginning of the Presbyterian church in Mississippi a strong decided attitude was taken against all ungodly amusements.

The Presbytery of Mississippi was organized in 1816 and in the second or third meeting it passed strong resolutions against card playing and games of chance. They say “All games of chance are so many inconsiderate and irreverent appeals to divine providence. If we may not take the name of God in vain, neither may we trifle with his providence, or make sport of it for our amusement. Games of chance being abused for the purposes of gain are odious to the feelings of the moral and upright. Christian feeling has long since proscribed games of chance and all forms of gambling. There is but one sentiment on this subject among the truly pious and it has become the moral sense of the Christian church. To offend this sentiment is to offend the church.”

For a long time in early days the habit of raising money by lottery prevailed throughout the land. But it proved to be a most vicious and destructive agency in polluting the morals of the people.

The Legislature of Louisiana had chartered a corporation in the state to raise money by lottery. In 1891 the license was about to expire and its promoters throughout the state were inaugurating a big effort to have the charter of the company renewed. It was a critical period in the history of the state. The evil effects of the lottery had been set forth during a long period of years and there was a growing spirit in Louisiana against renewing the license.

The Christian citizens all over the state agitated the question and were outspoken against it. The money power in favor of the lottery was very strong and it seemed as if the great evil was about to be fastened anew upon the state. The good people of all the neighboring states sympathized with Louisiana and they held meetings far and wide condemning the lottery.

In the fall of 1891 a great meeting was held in New Orleans in order to stir up the heart of the people and warn them to use all efforts to arrest the spirit of public gambling. 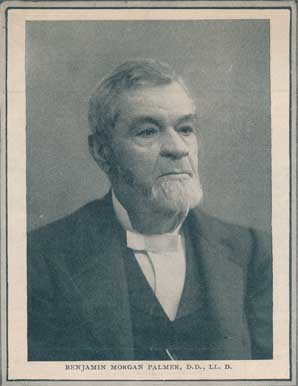 Some fine addresses were delivered, but Dr. Palmer of the Synod of Mississippi delivered the crowning address. His whole heart was aflame with the subject and the sympathy of the big congregation was with him. His address struck the right chord at the right time and it broke the backbone of the lottery. It was a great address and for the purpose of embalming it in the memory of our young people, we are giving it word for word as delivered that night. We leave out the cheers and the plaudits and the handclapping which were in evidence all through the speech.

When you read the address take your place in our big city. Think of the occasion and you will have something in your mind that will help you always. It is scriptural, patriotic and convincing to the highest degree and we make no apology in bringing it before you. It accomplished the grand result for which it was delivered. The address now follows:

Indeed, sir, if the worst should come to the worst in this present campaign, I for one could wish that, all technicalities being swept away, there might be some method by which the question might be carried up to the Supreme Court of the United States whether it is competent to any state in the union to commit suicide. And if that venerable court should return an answer, which I think they would not for a moment consider as possible, I would then for my part make the appeal to the virtues and common sense of the masses of our people, that the very instinct of self-preservation may stamp out of existence an institution which is fatal to the liberties and the life of the commonwealth.

To read the rest of this chapter, click here.