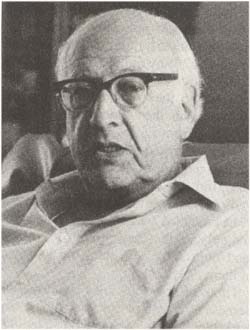 I never had the pleasure of meeting Dr. Gregg Singer, but he will always hold a special place in my life. His papers were the first collection that I ever attempted to process. As I confidently opened the box and opened one large envelope, the first thing I saw read:

I might as that I amtill mysitifed ax  p why you noukdfinnd my feeble efforts and writig of value to the Church But I wllstill try to coopeate as be t Ican. I may be able to sendyou a copy of over ure whichIhave drfated for a commite of Central CArolina Presbyery for the BCO.

Dismayed and defeated, I put Singer’s papers back on the shelf for some braver day.

But where I thought it was because of his age, it turns out his foibles in typing were a life-long affliction. His friends would tease him about it. Aiken Taylor once replied, “I was able to read your last letter with the help of a ouija board and a crystal ball.”

During World War II, Dr. Singer was the director of the War Manpower Commission in Illinois, and later was appointed to serve on the staff of the US Senate Commission investigating the attack on Pearl Harbor.

Dr. Singer was a highly skilled historian and an excellent teacher. His academic career included posts at Wheaton College, Salem College, the University of Pennsylvania, Belhaven College, Montreat-Anderson, Catawba College, Furman University, and the Atlanta School of Biblical Studies. He was also among the founding faculty at the Greenville Presbyterian Theological Seminary and he was teaching there at the time of his death, on March 22, 1999.

Dr. Morton H. Smith, first Stated Clerk of the PCA, said of Dr. C. Gregg Singer, that he “was committed to the Gospel of the Lord Jesus. He sought to live his faith as well as to teach it. He was a loving and faithful husband, and a loving father to his children. …[H]e was always a warm friend, and an example of what a teacher should be. He was the dean of church historians. His loss will be greatly felt by all who knew him.”

Dr. Singer taught history with a moral purpose. Another account of his life remembers that he would typically lecture using a tall stack of 3 x 5 cards, supplying students with lengthy quotations, often involving original languages, all touching on the major themes and personalities of church history. Whether he was covering Augustine, Anselm, Aquinas, Luther or Calvin, it was clear that he had a close familiarity with the works of each of his subjects. More than simply relating dates and events, Singer’s teaching culminated with interpretation. On that note, it should be mentioned that Dr. Singer’s book, A Theological Interpretation of American History remains in print to this day. [http://www.solid-ground-books.com/detail_1362.asp?flag=1]

It should also be noted that Dr. Singer had long been active as a ruling elder in the context of the old Southern Presbyterian denomination. Singer was also active in the renewal groups which worked to stem the tide of modernism in that denomination and he was the last president of the Concerned Presbyterians organization, staying to man the ship after most left with the formation of the PCA. He was himself received into the PCA in 1987, with ordination as a teaching elder under the authority of Central Carolina Presbytery.

A Sample of his Writing:

The intrusion into Christian life and thought of cultural influences originating in a non-Christian environment has been a continuous factor in the history of the Church. At no time in its history has the Church been free from the effects of its necessary contact with various forms of pagan culture, and the more highly civilized the paganism, the more insidious have been the results of these contacts.

The Church was brought face to face with the almost overpowering influences of Greece and Rome when it was most zealous for the purity of the Gospel message and when it was most acutely aware of the great chasm between the message of the Scriptures and Greek-Roman thought.

…Today in the contemporary Church modern paganism may well be invading Christian thought and practice in much the same way as its ancient counterpart infiltrated the early Church. The ecumenical movement stands in relation to Christian orthodoxy today in many respects as cultured paganism in its Greek trappings stood to the Church of the first four centuries. This movement represents a kind of synthesis between Christian and non-Christian thought.

The ecumenical attack on the pure Gospel is much more dangerous because it is more subtle. Although some who are active in the movement would openly sacrifice the supernaturalism of the Gospel in the interests of religious inclusiveness, they are in the minority.

The great majority would prefer a blend of Christian and humanistic elements with a synergistic conception of redemption exalting the value of human effort. In either case they resort to Christian verbiage, thus concealing from the unwary the non-Christian elements in their thinking.

The contemporary invasion of paganism into the Church is not confined to doctrine, it includes government and polity. In fact, there is a curious and remarkably close similarity between the rise of the papacy as the embodiment of absolutism within the Christian community during the Middle Ages and the increasing interest in the ecumenical movement of the present day.

Both developments are but the lengthened shadow of the theory of the corporate state and society over the life of the Church. It was against this heresy that the Reformers brought forth the Biblical doctrine of the priesthood of the believer.

The ecumenical movement reflects the dual trend in modern society toward a consolidation and centralization of power. No sphere of American life has been immune to this disease.

In the area of politics it has taken the form of the constant attempts of the federal government to claim for itself those powers reserved to the states by the Constitution. In the realms of business and commerce it is seen in the continuing trend toward mergers and combination. In the field of labor it has been signaled by the emergence of huge organizations which claim jurisdiction over large numbers of trade unions.

In this country there is an inclination toward bigness for its own sake, to look upon bigness in government, industry, labor and the Church with awe and to regard it as necessarily more efficient. Whether arising in the state, the labor unions, business or education, corporations must inevitably snuff out liberty in the interests of some form of absolutism.

However disastrous its appearance in government may be, its entrance into the life of the Church must be regarded as even more dangerous. The intrusion of absolutism into the Christian community under the guise and cloak of the ecumenical movement is not only the entrance of an essentially pagan political philosophy into the government of the Church but also of paganism itself into the Church’s doctrine and practice.

Words to Live By:
Dr. Singer knew the value of history for the Christian. The Christian faith is historically based, being particularly founded on the incarnation, life, death and resurrection of our Lord Jesus Christ, who is eternally the Second Person of the one Triune God. History matters, as it is the unveiling of God’s redemptive and providential plan.

For Further Study:
I did in fact get back to the arrangement and description [aka, processing] of Dr. Singer’s papers. There are still some items to add to that collection, but the bulk of it is described here.