January 27: Thornwell’s Views on the Board Debates

This was followed, a month later, with a fuller exposition of his views on the same subject, in a letter addressed also to Dr. Breckinridge: 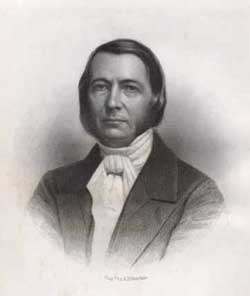 “REV. AND DEAR SIR : I have detained my manuscript in my hands much longer than I had any idea of doing, when I wrote to you before. My object in the delay has been to copy it; but day after day has passed over, and I have been so constantly occupied that I have had no time for the drudgery of re-writing it. I send it to you, therefore, with all the imperfections of a first draft. It was written before the meeting of our Synod, with the view of presenting it to that body, and in their name sending it as a memorial to the Assembly. This, however, was not done. I submitted the manuscript to a few members of Synod, who cordially concurred in its leading statements. My object in publishing it is not to gain a point, but to elicit discussion. I believe that the Boards will eventually prove our masters, unless they are crushed in their infancy. They are founded upon a radical misconception of the true nature and extent of ecclesiastical power; and they can only be defended, by running into the principle against which the Reformers protested, and for which the Oxford divines are now zealously contending. This view of the subject ought to have been enlarged on more fully than has been done in the article, because the principle involved in it is of vital importance; but I thought it better to reserve a full discussion of it for some subsequent article.

“There is a fact connected with the influence of the Boards that speaks volumes against them. A few men in the Church have presumed to question the wisdom of their organization. These men are met with a universal cry of denunciation from all parts of the land. If, in their infancy, they (the Boards) can thus browbeat discussion, what may we not expect from them in the maturity of manhood ?

“It is not to be disguised, that our Church is becoming deplorably secular. She has degenerated from a spiritual body into a mere petty corporation. When we meet in our ecclesiastical courts, instead of attending to the spiritual interests of God’s kingdom, we scarcely do anything more than examine and audit accounts, and devise ways and means for raising money. We are for doing God’s work by human wisdom and human policy; and what renders the evil still more alarming, is that so few are awake to the real state of the case. Your Magazine is the only paper in the Church that can be called a faithful witness for the truth. I do sincerely and heartily thank God for the large measure of grace which He has bestowed upon you. I regard the principles which you advocate of so much importance, that I could make any sacrifice of comfort or of means, consistent with other obligations, to aid and support you.

“I rejoice that you remember me and my poor labours in your prayers. My field of labour in the College is arduous and trying; but God has given me the ascendancy among the students. I have an interesting prayer-meeting and a Bible-class. My sermons on Sunday are very seriously listened to; and I have succeeded in awaking a strong interest in the evidences of our religion.

“I have formed the plan of publishing an edition of ‘Butler’s Analogy,’ with an analysis of each chapter, a general view of the whole argument, and a special consideration of the glaring defects in tho statement of Christian doctrine, with which the book abounds. It is a subject on which I have spent much patient thought, and on which I feel somewhat prepared to write. What think you of the scheme ? If you should favour it, any suggestions from you would be gratefully received. At some future day—I shall not venture to fix the time—you may expect an article from me on Natural Theology. I have been care- fully collecting materials on the subject, and shall embody them in a re- view of ‘Paley’s Theology,’ Bell and Brougham’s edition.

“In regard to the article on Boards,* I give you leave to abridge, amend, correct, wherever you deem it necessary. If you can conveniently do so, I would be glad to have you return the manuscript, as I have no copy of it.