Freely adapted from a tribute written upon his death, the original source now long lost in antiquity. . . 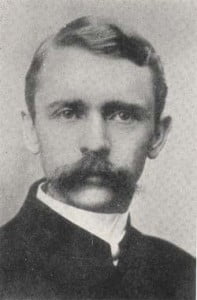 It was on this day, January 7th, in 1858 that Alonzo and Frances Rice Cocke praised God for the birth of a healthy son, and they named him Alonzo Rice Cocke. He was a decendent of both the Rev. Samuel Blair, pastor of the historic Presbyterian church at Faggs Manor, Pennsylvania, and of the Rev. David Rice, who went from Virginia to Kentucky after the Revolutionary War, and did much to establish Presbyterian churches west of the Alleghanies.

Like Samuel of old he was early called of God. He professed conversion at the age of eight, telling his mother he hoped it was the grace of God that made him happy and even at that young age, was said to have shown a perfect understanding of the plan of salvation. His father having died, his religious training rested upon his mother. When he was just nine years old, he joined Diamond Hill Church, of Roanoke Presbytery. After reading the life of General Lee, he said, “I had rather preach the gospel than be the greatest general that ever was.”

Alonzo studied at the New London Academy and later at Washington and Lee University, graduating in his twentieth year with distinction. He went to Union Seminary in Richmond, a school founded by a distinguished member of his mother’s family, finishing his course at the age of twenty-two. He preached at Covington, Va. and Hot Springs, Ark., declining calls to these churches. His first regular pastorate, beginning in 1880, was with the Windy Cove Church and when the congregation at Millboro was particularized, he served both churches as pastor.

As we see so often with pastors in the nineteenth century, he waited until he had a pulpit to serve before taking a wife, and so in 1880 he was married to Miss Jeanie Leyburn, of Lexington, Virginia, who was very helpful to him in his work. One child, Frances Lea came to bless their lives. It was here at the Windy Cove Church where he met the saintly Rev. Samuel Brown who was like a father to him in his friendship.

At last, Rev. Cocke was compelled to resign his beloved pastorate on account of ill health in 1884. After recuperating he took a course under the brilliant Dr. R. L. Dabney in Texas. While there he taught some of the classes of Dr. Dabney who said of him, “Such a display of didactic skill and tact showed him to be a born teacher.” Great inducements were offered him to remain in Texas, but personal and domestic duties caused him to return to Virginia.

He was called to Waynesboro in 1886. The church there had 105 members, but during his pastorate it increased to five or six hundred with two organizations. In all, eight hundred were added to the church. During his pastorate there he filled the chair of Philosophy at the Valley Seminary. He was offered the Presidency of Agnes Scott Seminary, in Decatur, Georgia, and the chair of Systematic Theology in South Western University, Clarksville, Tennessee. He was appointed chaplain of the University of Virginia but served only one term (1895-96), as his congregation was unwilling to sever the pastoral relation.

Rev. Cock’s zeal for winning souls was earnestly displayed at the University of Virginia. Beginning in 1897, Dr. Cocke wrote the Practical and Illustrative Department of The Earnest Worker. He authored Studies in Ephesians and Studies in St. John and No Immersion in the Bible. These works were all enthusiastically received by his friends. The degree of Doctor of Divinity was confered on him on the same day by Washington and Lee University in Virginia. and Central University, in Kentucky.

“Such was his culture of mind and heart, his ability and many sided activities, his rare union of pastoral and preaching gifts, his tact, his sympathy and his cheerful courage, that a large promise of usefulness in the service of God and man was before him,” thus wrote one of his friends. One of the members of Windy Cove Church writes, “We know that earth is better and brighter, lives richer and fuller, hopes and aspirations more glorious for those who came into close contact with his saintly life.

Rev. Cocke not only preached the glorious gospel with great earnestness and power–he lived it. He lived among his people and he loved them–each man, woman, and child felt sure of a sympathetic friend in him of him more can it be said than of any one I have ever known, ” ‘Blessed are the pure in heart for they shall see God.’ ” One of the last sermons he preached was from the text of Revelation 21:21, “Each of the gates made of a single pearl.” He seemed to be gazing beyond the Pearly Gates into the celestial city. Those beautiful gates opened for him in a few days. He died at Mercy Hospital, in Chicago, on August 23, 1901, at the age of forty-three, following an operation. His body was brought back to Waynesboro and interred in River View Cemetery, where he awaits the resurrection call. For him to live was Christ and to die was gain.

Words to Live By:
To whom much is given, much is required. But do you feel your gifts to be small by comparison? Then be faithful with what the Lord has given you, for he who is faithful in the small things will be intrusted with greater.

2. No Immersion in the Bible; or, Baptism as taught and practiced by Christ and the apostles. Richmond, Va., Presbyterian committee of publication, 1893. 80 p.

3. Studies in the Epistles of John, or, The Manifested Life. Richmond, VA : Presbyterian Committee of Publication, 1895. 159 p.