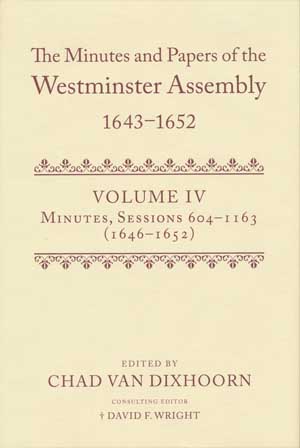 “The business of the Assembly was now virtually at an end. The subjects brought before them by Parliament had been all fully discussed, and the result of their long and well-matured deliberations presented to both Houses, to be approved or rejected by the supreme civil power on its own responsibility. But the Parliament neither fully approved nor rejected the Assembly’s productions, nor yet issued an ordinance for a formal dissolution of that venerable body. Negotiations were still going on with the king; and in one of the papers which passed between his majesty and the Parliament, he signified his willingness to sanction the continuation of Presbyterian Church government for three years; and also, that the Assembly should continue to sit and deliberate, his majesty being allowed to nominate twenty Episcopalian divines to be added to it, for the purpose of having the whole subject of religion again formally debated. To this proposal the Parliament refused to consent; but it probably tended to prevent them from formally dissolving the Assembly, so long as there remained any shadow of hope that a pacific arrangement might be effected with his majesty.
In the meantime many members of the Assembly, especially those from the country, returned to their own homes and ordinary duties; and those who remained in London were chiefly engaged in the examination of such ministers as presented themselves for ordination, or induction into vacant charges. They continued to maintain their formal existence till the 22d of February 1649, about three weeks after the king’s decapitation, having sat five years, six months, and twenty-two days; in which time they had held one thousand one hundred and sixty-three sessions. They were then changed into a committee for conducting the trial and examination of ministers, and continued to hold meetings for this purpose every Thursday morning till the 25th of March 1652, when Oliver Cromwell having forcible dissolved the Long Parliament, by whose authority the Assembly had been at first called together, that committee also broke up, and separated without any formal dissolution, and as a matter of necessity.