A Life of Sacrifice for the Gospel of Jesus Christ

The Rev. Robert Waldo Chesnut was a pastor in the Reformed Presbyterian Church in North America, General Synod (RPC,GS). This was the body which later merged with the larger side of the Bible Presbyterian Synod split in 1965 to create the Reformed Presbyterian Church, Evangelical Synod. Dr. Chesnut served in the lean years of the denomination when, at its low point, there were just nine churches left on the roster. Eventually the Lord brought renewed vigor and growth, such that by the time of the merger in 1965, there were some 25 churches in the RPC,GS. No doubt the Lord used Chesnut’s sacrificial love for the Church as a great instrument in bringing about some of that later growth.

Reprinted here is a brief biography which originally appeared in The Reformed  Presbyterian Advocate, 87.4 (April, 1953): 40-42. 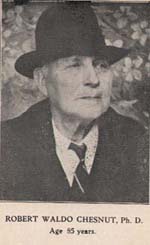 On March 23, 1953 at 8:35 P.M. our Church was deprived of its Pastor Emeritus by the death of Rev. Robert W. Chesnut, Ph.D. He was 94 years, 6 months, 8 days old when he passed on to be with his Lord. Dr. Chesnut had been Pastor Emeritus since his retirement from the active ministry in 1942 after 55 years as a minister. In 1950 he attended his last meeting of General Synod, at the Houston Mission [in Tennessee]. In November of 1952 he reported to work on the new church [in Duanesburg, NY], bringing his hammer and lunch pail. He worked from 9 A.M. to 3 P.M. He later said: “I guess I pounded two or three pounds of nails and it helped some.” He was constantly interested in the new church and did all he could to advance its construction.

Robert Chesnut was born on a farm near Morning Sun, Iowa, on September 15, 1858. His parents had emigrated from Glasgow, Scotland. His father was a boilermaker.”

“He had very little formal education in elementary or high schools. He never attended school during his early years for more than three months at a time. Until his entrance into college he had attended school only a total of twenty months.

In 1869 his family emigrated, by covered wagon, to Kansas and settled in Clay Center. There Dr. Chesnut, his father, and his brothers engaged in farming.

He did not want to enter college or the ministry and, he has reported, fought the call of God to the ministry for some time. Finally one day, plowing in the fields (and he had not enjoyed good health for many months) he stopped his horses, sat down on a plowbeam and settled the matter with God. He said: “Lord, if you will give me health and see me through my education I will serve you in the ministry.” He finished the day’s plowing without being fatigued and God has kept His part of the covenant by blessing His servant with good health and length of days. Anyone who knew Dr. Chesnut knows that he kept his part of the covenant too, serving his God and his beloved Reformed Presbyterian church for sixty or more years.

He entered the Agricultural College of Kansas, at Manhattan, with a trunk containing a few clothes, his Psalm book, his Bible, and his Catechism, and $45 cash to see him through. He paid his way through school by raising a crop of wheat each Summer and selling it in the Fall. He also earned a little extra by tutoring his fellow students in Greek.

His college training was continued and completed at the University of Kansas, at Lawrence.

For theological training he spent a summer studying under his pastor, Rev. James S. Scott and entered the Reformed Presbyterian Seminary in Philadelphia the following term as a second year student.

He completed the course and was licensed to preach on March 22, 1887 in the First Reformed Presbyterian Church in Philadelphia.

He was ordained on May 10, 1888 and installed the same day as pastor of the Reformed Presbyterian Church at Marissa, Illinois. The church is no longer in existence. Dr. Chestnut had been called to a church in New York City, but declined the call because he thought that he, a farm boy from Iowa and Kansas, would not be suited to a city pastorate. After sixteen years in Marissa he went to the church in Cutler, Illinois. In 1910 he accepted a call to the Reformed Presbyterian Church in Duanesburg. Here he served as pastor and worked the parsonage farm until 1917. He then moved to the Seventh Reformed Presbyterian Church in Philadelphia and remained two and one-half years. He then returned to Duanesburg, to save the congregation from disbanding. It was, at that time, a small and discouraged flock in need of a shepherd. From 1919 until his retirement in 1942 Dr. Chesnut served here as Stated Supply, worked the parsonage farm (and another larger farm which he purchased from his meager earnings) and ran a printing plant.

Dr. Chesnut was survived by his widow, Mrs. Anna Heim Chesnut, who is his third wife. In 1885 he was married to Jennie Hulick, who died in 1896. Their daughter and son died while in their youth. His second wife and an infant also died–the wife just five weeks after they moved to Duanesburg in 1910. Dr. Chesnut was survived by three children, thirteen grandchildren, and one great-grandchild.

The Duanesburg congregation, and the whole of the Reformed Presbyterian Church, has suffered a loss by the passing of our friend. But we can have no regrets, for he lived a long and full life and we are assured that he has gone to glory to be forever with his Lord, where there is no more pain, no sorrow, no struggle with sin, no more death, where death is swallowed up in victory.

“Truly a Prince has fallen in Israel. How he did love to come to General Synod and we have missed him these last few years. He really loved to preach the Gospel. Many lives have been touched by his long years of service.” [Rev. Robert W. Stewart]

Words to Live By:
“Yea doubtless, and I count all things but loss for the excellency of the knowledge of Christ Jesus my Lord: for whom I have suffered the loss of all things, and do count them but dung, that I may win Christ,”—Philippians 3:8, KJV.