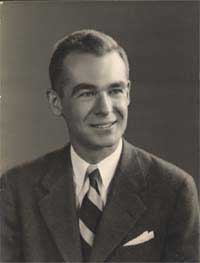 Frederick W. Evans, Jr. was born on April 9, 1924 in New York City to the Rev. Frederick W. Evans, Sr. and his wife Grace. He was educated at the College of Wooster, graduating with a B.A. in Classical Languages; honors from that institution included Phi Beta Kappa. Princeton Theological Seminary conferred the degree of Bachelor of Divinity in 1947 and he was ordained to the gospel ministry on April 9, 1947 by the PC(USA) Presbytery of Troy (later incorporated into the Presbytery of Albany). One of his Princeton professors, the Rev. Joseph L. Hromadka, brought the sermon at the service of ordination.

It was at the outset of this pastorate that he married Irene Payne, with the marriage taking place in Brooklyn on 15 May 1954. Rev. Evans and his wife have four children: William, now a professor at Erskine College and adjunct professor at Erskine Theological Seminary; John, an ordained pastor in the PCA and a missionary in Africa; and daughters Mary E. and Martha J. 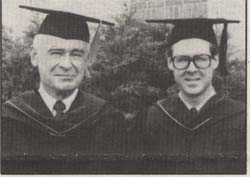 His first three pastorates were within the Presbyterian Church (USA). His last three pastorates were in independent churches. Leaving the PC(USA), he first accepted a call to the Westover Church of Greensboro, NC, where he served from 1955 until 1964. From this post, he next moved to Indianapolis and the pulpit of Faith Missionary Church, serving there from 1965 – 1971. It was during his last pastorate, at the Walnut Grove Chapel of Indianapolis (1971 – 1990), that he began also working toward a doctorate, first receiving an MA in 1974 from Butler University and an S.T.M. in 1978 from Christian Theological Seminary, both of these institutions being located in Indianapolis. Westminster Theological Seminary then conferred the degree of Doctor of Ministry in May of 1984. Of special note was the graduation of father and son together at the same occasion, with son William receiving the M.A.R. degree.

“For better than thirty years I have been without formal denominational ties. At the time when I departed the Presbyterian Church in the U.S.A. for conscience’ sake I did not feel at liberty to seek membership in either the Bible Presbyterian Church, because of the McIntire influence, or in the Orthodox Presbyterian Church, because of my premillennial convictions.
Since the early 1960’s I have been approached by a number of individuals in the Reformed Presbyterian Church, Evangelical Synod, and more recently the Presbyterian Church in America, urging me to cast in my lot with them. This I have hesitated to do, not wanting to cause misunderstanding or difficulty for the various independent congregations I have served.
Plans now call for me to lay down my present pastorate in the Summer of 1990. Accordingly I do not feel that my becoming part of the PCA as an individual would create any serious problems for the Council and Congregation of Walnut Grove Chapel.
My motive in making application is simple. I have always subscribed to the Presbyterian principle of being in subjection to faithful brethren and feel that recent events in the religious world have only underscored the importance of accountability. In view of my Reformed convictions and persuasion of the rightness of Presbyterian polity, I believe that the PCA would afford me the opportunity to be subject to those who are true brethren in the Lord…”
[27 July 1989]

Of note here is the sacrificial character of a true pastor, who put consideration for his congregation first ahead of his own needs. He would not take the least action that might be misunderstood.
Upon his death on 12 May 1992, the PCA Messenger commented on the Rev. Dr. Evans’ keen interest in church history. He authored four books during his lifetime. Two twelve-week study courses were entitled They Kept the Faith [a study bringing together faith and history] and They Sought a City! [a survey of American Church history]. Also published were Christ in the Psalms and The God Who Is [a study on the character of God, employing the pattern found in the Westminster Shorter Catechism, question 4].