A sub-committee was established to prepare a plan for cooperation among the respective churches, drawn from proposals suggested in the joint meeting. Such a plan would be presented to the full body for possible recommendation to the denominations themselves.

Among the proposals made was one urging the various churches to cooperate in world-wide relief services; the Christian Reformed Church has the most extensive such service now. Another proposal recommended publication of a directory of all the co-operating churches.

It was also proposed that there be a federation of Presbyterian and Reformed churches that would include coordination of agencies and the holding of consultative assemblies. The ultimate goal of union into one church was urged.

November 12: Two Assemblies in One Year!

An Assembly of Great Blessings

With over four hundred attendees, the Second General Assembly of the Presbyterian Church of America met in the large auditorium of the Manufacturers’ and Bankers’ Club in Philadelphia, Pennsylvania, beginning on Thursday,November 12, 1936.  Present were 64 teaching elders and 26 ruling elders, with numerous guests. The photograph below serves to document that occasion. To my knowledge, no photograph has been discovered of their first General Assembly, which met in June of 1936.

The first Moderator of the new denomination, J. Gresham Machen, preached from2 Corinthians 5:14, 15.  The text reads, “for the love of Christ constraineth us; because we thus judge, that if one died for all, then were all dead: And that he died for all, that they which live should not henceforth live unto themselves, but unto him which died for them, and rose again.”  Speaking on the love of Christ being a constraining force, Dr. Machen, in a message not soon forgotten by those who heard him, stated that Christians should not live to themselves but live unto Christ.

Taking the position of Moderator was the Rev. J. Oliver Buswell, D.D., president of Wheaton College, Wheaton, Illinois.  He was to moderate the meeting in good fashion as a moderator should do, without fear of discipline or the ridicule of biblical positions.

This General Assembly adopted the Westminster Confession of Faith and Catechisms as they stood before the 1903 additions enacted by the P.C.U.S.A. general assemblies.  Thus the Presbyterian Church of America put itself on record as being a truly Reformed church.

Various reports came on this day and over the next two days, from committees set up by the previous Assembly in June of 1936. These included Home Missions and Church Extension, with report of 13 home missionaries already at work in the field.  Present among them was one home missionary to South Dakota, the Rev. David K. Myers, this writer’s father. The Committee on Foreign Missions also reported, encouraging support for the Independent Board for Presbyterian Foreign Missions. However, it also spoke about the establishment of an official  Board  of  Foreign  Missions  from the denomination at the next General Assembly.

Westminster Seminary was recommended to the pastors and congregations as worthy of their prayers and financial support. Held over to the next General Assembly was the adoption of a Form of Government, Book of Discipline, and Directory for Worship. The assembly was dissolved on Saturday evening, November 14, 1936 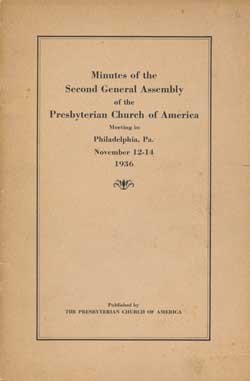 Words to live by:  This writer can read the minutes of the Second General Assembly, as he has a copy of them before him, but the spirit of the meeting was only to be enjoyed by those who were actually present.  It must have been a joyous meeting to realize that since just that previous June of 1936, the number of ministers had increased from 35 pastors to 107 ministers in the Presbyterian Church of America.  God was doing a great work in this spiritual successor to the Presbyterian Church, U.S.A.  Take time to look at your church choice, and if it is an Evangelical and Reformed Church, rejoice in what is happening in it as a sign of God’s blessings.  Indeed, support it with your tithes and offerings.  It probably is not perfect.  No church this side of glory is perfect. But if it is committed to the Scriptures, the Reformed faith, and the Great Commission, then give thanks for it, pray for it, and support it.

What’s in a Name?

Solomon wrote once that “a good name is to be chosen rather than great riches.”  (Proverbs 22:1a ESV)  And while this text speaks of one’s personal name, it could also have an application to the name of a denomination.  What’s in a name, after all?  That question was the issue in February, 1939 when the Presbyterian Church of America had to be renamed, just two and one half years after taking it up in 1936.

The Presbyterian Church in the U.S.A. had taken the young denomination to court over the issue of its chosen name.  That whole scene will be dealt with in a future historical devotional on April 28.  When the PCUSA won the court case, the General Assembly of the PCofA decided not to contest the lower court decision.   Calling a special meeting in the month of February, the question was simple.  What do we call ourselves now?

In the end, on this day, February 9, 1939, the name of Orthodox Presbyterian Church won over “Evangelical Presbyterian Church” by a close margin, but a winning margin. Certainly, each of the above suggested names meant something to the proponents of them, or they wouldn’t have been suggested in the first place.  The choosing of the winning name spoke volumes about the orthodox or straight, right, and true convictions which led the men and women out of the apostate Presbyterian Church in the U.S.A. in the first place.  Biblical orthodoxy would be the hallmark of the continuing church, as it had been back in 1936.

The managing editor of the Presbyterian Guardian, Thomas R. Birch, said that year of 1939 in his editorial,

“You whose privilege it is to bear that name (e.g. Orthodox Presbyterian Church), bear it proudly, gladly, holding its banner high.  It is a true and a great name, a name to exult in and a name to make you humble.  It tells the world exactly what you are and where you stand in the present death-struggle between the forces of faith and the battalions of unbelief.  It proclaims to the world that here is a Presbyterian church that takes its confession of faith seriously.  At the very outset it is a name with a meaning.”

The OPC is not alone in having to find a new name. The name originally chosen in 1973 for what was to become the Presbyterian Church in America (PCA) was the “National Presbyterian Church,” but seeking to avoid a conflict with the Washington, D.C. congregation of the same name, we wisely chose another name in 1974 and so came to be the PCA.

Words to Live By: Biblical orthodoxy is, sadly, in ruins in some Presbyterian denominations and churches.  Let it not be in the specific church with which you are associated as a member or a minister.  Stand for the truth of the gospel, believing Martin Luther’s words to be true, “Let goods and kindred go, This mortal life also; The body they may kill: God’s truth abideth still, His kingdom is forever.”