A Pillar of Strength in the House of our God

By the age of fifteen years of age, the young man had studied Latin, Greek, algebra and geometry.  This enabled him to get ready for the sophomore class at Hampden-Sidney College.  While there, a spiritual revival brought him to Christ, and at age 17, he joined the Providence Presbyterian Church in Louisa County, Virginia. 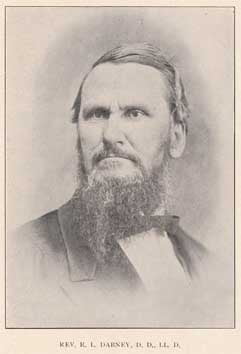 Born March 5, 1820, Robert Lewis Dabney was a man of many sides.  We could write about his political side in this historical devotional, and see him as a loyal citizen of the Confederacy.  Even after the War Between the States, he would write a book defending the South’s position.

We could write about his military side.  He was a chaplain at the beginning of the war to the eighteenth Virginia which fought at Manassas in 1861. Many soldiers would come to Christ through his preaching the gospel.  And of course, he was the chief of staff for a year with General Stonewall Jackson.

We could spend time by thinking about the pastoral side of Dr. Dabney.  He was the pastor of Tinkling Spring Church after graduating from Union Theological Seminary down south. The congregation grew under his ministry both spiritually and numerically.

But the better use of this space would be found in thinking about the mentoring side of Dr. Dabney. Whether it was teaching at Hampden-Sydney, Union Theological Seminary, the University of Texas, or Austin Theological Seminary, hundreds of students, many of whom would go on to serve the Lord Jesus, received the truths of theology and church history from his lips.  He was the chief proponent of that system of Reformed Theology which the Southern church had ever known. Calvinism was ever his belief and practice by his words and  actions.

Words to Live By:  It is a blessed privilege to equip the saints for the work of service unto the edifying of the body of Christ.  That Scriptural word “equip” speaks of preparing others for service.  It also means in the sense of restoring, or mending a broken bone back into its proper place.  How we need to pray for those who are spiritual teachers in the church of Christ.  Theirs is a special ministry as they instruct others to carry on the work of service.

Through the Scriptures: Deuteronomy 17 – 19

Through the Standards: The Covenant of Grace in both Testaments

WLC 34 — “How was the covenant of grace administered under the Old Testament?
A.  The covenant of grace was administered under the Old Testament, by promises, prophecies, sacrifices, circumcision, the passover, and other types and ordinances, which did all fore-signify Christ then to come, and were for that time sufficient to build up the elect in faith in the promised messiah, by whom they then had full remission of sin, and eternal salvation.”

WLC 35 — “How is the covenant of grace administered under the New Testament?
A.  Under the New Testament, w hen Christ the substance was exhibited, the same covenant of grace was and still is to be administered in the preaching of the word, and the administration of the sacraments of baptism and the Lord’s Supper; in which grace and salvation are held forth in more fullness, evidence, and efficacy, to all nations.”

Remembering Our Fathers and Brothers:
On this day, 5 March 1994, the Rev. Russell George Flaxman passed away. Born in 1920 to Jessie and Annie Flaxman, he was raised in the Toronto, Canada area and attended Toronto Bible College, 1945-48. Rev. Flaxman was ordained in 1949 by the Association of Gospel Churches and pastored several churches in Virginia before transferring his ministerial credentials into the PCA on 1 March 1974. He served as Stated Clerk of the James River Presbytery from 1989-1990.