Who Was That Man?

A graduate of the school, he later served for twenty-four years as a director of the Princeton Theological Seminary. But history remembers the man primarily for a series of letters that he wrote under a pseudonym. Indeed, a fair amount of his published work dealt with the Roman Catholic Church, in which he had been raised in Ireland.

Nicholas Murray was born on Christmas day in 1802, in Ballinasloe, County Galway, Ireland. He emigrated to the United States in 1818, at the age of 16, serving as a apprentice printer at Harpers in New York City, to support himself. It was during this time that he came under conviction of his sins, responded to the Gospel, and left the Roman Catholic Church. In particular, it was a sermon delivered by the Rev. John Mitchell Mason that the Lord used to bring young Murray to saving faith. Subsequently he sat under the preaching of the Rev. Gardiner Spring for a year and a half. In time he was able to graduate from college and then at Princeton prepared for the ministry. As pastor of the First Presbyterian Church in Elizabeth, New Jersey, he became a prominent figure in the Old School wing of the Presbyterian Church in the U.S.A., even serving as Moderator of the Sixty-first General Assembly, in 1849.

For several years Rev. Murray had considered a project of writing a series of letters, presenting his own experience in the Roman Catholic Church and how he was led to leave it. Friends encouraged him in this effort, and eventually the letters began to be published on the pages of The New York Observer, under the pseudonym of Kirwan. The actual Kirwan had been an Anglican Dean and like Rev. Murray, had himself once been a Roman Catholic. Murray probably took up the pseudonym out of respect for this Anglican preacher.

The first series consisted of twelve letters, published in serial fashion between February and May of 1847. These were quickly gathered up as a book and published, with more than ten thousand copies sold in the first edition. Another edition soon followed, then the work was translated into German, and eventually there were more than a hundred thousand copies in circulation. Few publications of that day exceeded these numbers. As Murray’s biographer stated, “It is certainly safe and just to say that no writings on the Roman Catholic question have excited so much attention since the Reformation, or have been so widely read by the masses of the people.”

A second series of letters began to appear in newspapers in October of 1847. This second series, less popular among Protestants, was actually more effective among Roman Catholics. Both series had been addressed to the Roman Catholic bishop of New York, the Rev. John Hughes, though Hughes ignored the appearance of the first series, and only upon publication of the second series did Bishop Hughes compose any response. Rev. Murray continued to write on this subject until about 1852. The Rev. Nicholas Murray died on February 4, 1861, and it was on March 31, 1861 that the Rev. James Baird brought a memorial address in his memory. A large biographical memoir was issued the following year by the Rev. Samuel Irenaeus Prime.

Words to Live By:
The Lord brought this young man across an ocean in order to save him. No obstacle is too great for our God. The Lord works sovereignly, where and when He will, extending His grace and mercy to the least of men and to the greatest of sinners. He raises up the most unassumingly and unlikely, to do great works for His glory. Only in eternity will it be revealed the extent to which the Lord has used each of His children in extending His kingdom.

Baird, Rev. James, A Discourse delivered in the First Presbyterian Church, Carleton, City of St. John, N.B., on Sabbath, 31st March, 1861: In Memory of the late Rev. Nicholas Murray, D.D., author of the “Kirwan Letters” &c., who opened the above church nearly four years ago. 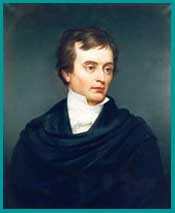 Lord, Give Us Giants!

He was one of those men whom you wish had written more. His son, R. J. Breckinridge, was a prolific writer, but John only left us a handful of published works. John Breckinridge was born in Cabell’s Dale, near Lexington, Kentucky, July 4, 1797. John’s father, the Honorable John Breckinridge, had served as Attorney General during the Jefferson administration, but died when John was only nine years old.

Raised by his widowed mother and an older brother, John attended the College of New Jersey, graduating in 1818, but decided against the legal profession in order to prepare for the ministry at Princeton Theological Seminary, attending there from 1819-22. Upon graduation, he was appointed to serve as chaplain in the U.S. Congress, 1822-23, and following that term, was then ordained by the Presbytery of West Lexington on September 10, 1823 and installed as pastor of the Second (McChord) Church in Lexington, Kentucky. This church he served until called in 1826 by the Second Presbyterian Church, in Baltimore, Maryland.

Leaving the pulpit ministry, Rev. Breckinridge served from 1831 to 1836 as Corresponding Secretary for the Board of Education of the Presbyterian Church, U.S.A.  From 1836 to 1838, he was Professor of Pastoral Theology and Missionary Instruction at the Princeton Theological Seminary. His wife, Margaret, was the daughter of Dr. Samuel Miller, and she died in 1838. Perhaps her death prompted his resignation from the Princeton faculty, nor did John survive her by many years.  His last significant service was as Secretary and General Agent for the PCUSA Board of Foreign Missions, from 1838 to 1840. Leaving that post, he served only briefly as stated supply for a church in New Orleans, Louisiana before declining health forced his retirement, and he died on the same spot where he had been born, in Cabell’s Dale, Kentucky, on August 4, 1841, at the age of forty-four. One of the last things that he said before his death was—”I am a poor sinner who have worked hard, and had constantly before my mind one great object—the conversion of the world.”

During Rev. Breckinridge’s years with the Board of Education, he oversaw the publication of a series of Annuals, volumes comprised of collected essays. These volumes appear to be quite rare and the PCA Historical Center was blessed to locate a copy of the fourth volume, published in 1835. The full title of this work isThe Annual of the Board of Education of the Presbyterian Church in the United States: A New Year’s Offering for 1835.

Rev. Breckinridge writes a brief introduction for this volume, the larger portion of which follows [emphasis added]:—

. . . In the present crisis of all things, human and divine, it is unspeakably important for American youth to know what heaven and earth expect from them. Candidates for such an office, in such an age, and such a country, can no longer be ordinary men. The position is one full of peril to themselves, and of calamity to the church and world,—if not occupied to the entire measure of its advantages and its distinction. The very highest attainments in piety, are now absolutely indispensable. He, who aims below this standing, cannot be a Christian in any age; but in this great conjecture, no man is fit to be minister who does not reach it.

It has often been said, this is an age of action. Those who are already in the field, and will not be efficient, must die off in their fearful lethargy. But to bring new sluggards into the ministry, and especially to put the treasure of the church in requisition, in order to do it, were indeed the gratuity of sin and folly,—”the superfluity of naughtiness.” “He that sleepeth in harvest is a son that causeth shame.” The harvest of the earth is ripe; and its boundless fields wave before us, and call on us to thrust in the sickle and reap. We must have more enterprise, more self-devotion, more of the foreign missionary spirit, or our Boards of Education will sink into contempt. Unless our young men awake, and arise to the greatness of their destiny and office, the world will outrun the church in enterprise, intrepidity, and public spirit. The church is now passing into the relation of great institutions and little men. May the days of men, yea, of giants, in God’s service, revisit the earth in your consecrated persons! Let it not be our shame, and the world’s affliction, that we have contributed to bring you into the sacred office.

With mingled hope, and fears, and with many supplications, and tears, and labors for you, I am your friend and fellow-servant,

PUBLISHED WORKS BY THE REV. JOHN BRECKINRIDGE (with links to digital editions):—

“Introductory address” to Volume 1 (1832) of the series, The Annual of the Board of Education of the Presbyterian Church in the United States.

An address, delivered July 15, 1835, before the Eucleian and Philomathean societies of the University of the city of New York (1836).

A Memorial of Mrs. Margaret Breckinridge (1839) – by Archibald Alexander.