A Churchman Extraordinaire, with a Heart for Missions 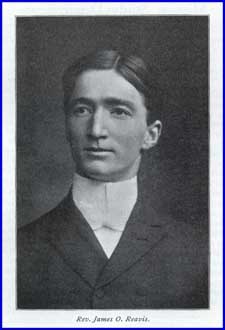 James Overton Reavis was born in Florida, Monroe County, Missouri on December 8, 1872 to parents James Overton Reavis and Ellen Roselle Reavis. He received his education at Westminster College, Fulton, Missouri, graduating in 1896 with the BA degree and the MA degree from the same institution in 1897. Reavis then attended Louisville Presbyterian Theological Seminary from 1897-1899, graduating with the Bachelor of Divinity degree. Another B.D. degree was earned at Princeton Theological Seminary after attending there, 1900-1901, while also attending New York University, where he studied comparative religion under the venerable F.F. Ellinwood, then Secretary of Foreign Missions of the Presbyterian Church in the U.S.A.

Dr. Reavis had unusual opportunities of study in the field of Biblical Theology; first, with Dr. Marquess at the Kentucky Seminary (as it was sometimes called), then with Dr. Vos at the Princeton Seminary, and also special courses at the Seminary of the Free Church in Edinburgh during one term overseas. After graduating at the Seminary he went to Montana with an invalid sister, securing the restoration of her health, and there he engaged in home missionary work for a few months.

Rev. Reavis was ordained on 12 April 1900 by Palmyra Presbytery (PCUS) and installed as stated supply of the First Presbyterian Church of Louisville, Kentucky, serving this church immediately following his graduation from Princeton, from 1901-1902. This was during the absence in Europe of the pastor, Rev. J. S. Lyons, D.D. He was married in December, 1902, to Miss Eva Witherspoon, daughter of the Rev. Thomas Dwight Witherspoon, who had passed away in 1898. His father-in-law had served this same church as pastor from 1882-1891. Mr. Reavis also concurrently supplied for a short time Louisville’s Second Presbyterian Church.

Rev. Reavis then accepted a call from the First Presbyterian Church of Dallas, Texas and pastored that church from 1902-1905. During his pastorate there of two and a half years the church increased in membership from 497 to 830; 140 of the additions were on profession of faith. The church eventually had four Sunday schools, with an enrollment of more than 600 pupils; two new church buildings were erected in Dallas, and two in the Home Mission field of Western Texas. The church supported one missionary in Korea, one in Japan, and one in Western Texas.

Mr. Reavis was later made Chairman of the Board of Directors of the Presbyterian Orphanage of the Synod of Texas, and was instrumental in raising $20,000 for this institution. He was an applicant for appointment as missionary to Korea, but was prevented by providential circumstances from going. His interest in that particular field may have derived from his wife’s sister, Lottie Bell, and her husband Eugene Bell having served as missionaries to Korea.

Even as a young man, Mr. Reavis was very active in Christian work from the beginning of his college days. His missionary aspirations, and his remarkable record in developing the missionary life and activity of his church, were qualities which led to Mr. Reavis being called to the work which the PCUS Assembly had in mind in electing a second foreign missionary secretary. 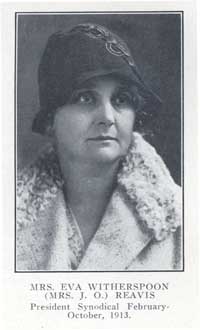 From 1906 until 1911, Rev. Reavis served as the Secretary for the Executive Committee on Foreign Missions of the PCUS, in Nashville, Tennessee. He later resigned that position to return to the pastorate, answering a call to the pulpit of the First Presbyterian Church of Columbia, South Carolina, where he served from 1911 until 1914. During these same years, his wife Eva was active with the Women’s Synodical and in the 1913-14 term, served as its president. From 1914 to 1920, Dr. Reavis was professor of English Bible and Homiletic and Pastoral Theology at the Columbia Theological Seminary, and the PCA Historical Center has preserved several of his course syllabii from Columbia. His final service to the Church was to return as the Secretary of the Executive Committee on Foreign Missions, serving a lengthy term from 1920 to 1943.

In 1943 Dr. Reavis was honorably retired, residing in Burns, Tennessee until his death on August 21, 1959. Honors received during his life include the Doctor of Divinity degree, awarded by Austin College in 1908 and the LL.D. degree, awarded by the Alabama Presbyterian College in 1916. An article of his, “Four Kinds of Souls,” was published posthumously in The Southern Presbyterian Journal, in the September 23, 1959 issue (pages 9, 11, 15).

Words to Live By:
It is a mistake to think that just because you are a Christian, that everything will simply fall into your lap. Life takes work. Natural talent is nothing without discipline and training. And depending upon your calling in life, it may take many years of preparation to properly come into the place where God has called you. Think of Moses and of Paul, as but two examples in Scripture. Those who would minister the Word of God must be diligent students of the Scriptures, and those called to other endeavors must also do their work as unto the Lord.
Study to shew thyself approved unto God, a workman that needeth not to be ashamed, rightly dividing the word of truth.–2 Timothy 2:15, KJV