The Mexican Revolution began in 1910 and continued on for about ten years. Appearing on the pages of the Presbyterian Survey in 1915, there was this introduction to a brief article on Presbyterian missions to the Mexican people:

“Among the hundreds of thousands of Mexican people who have peacefully invaded our borders, and have come to make their permanent home in our country, there is no more important center than San Antonio. Apart from the thousands who are transiently here for safety and sustenance incident to the military and industrial troubles in the Republic of Mexico, we have a large permanent Mexican population which is steadily growing. Because they speak the Spanish language only, it is impossible to serve them by the ordinary Home Mission forces. A separate force and equipment must be provided, as distinct as if located in a foreign land.

“For ten years we have had at San Antonio a Presbyterian work for the Mexicans. It was established by Rev. Walter S. Scott, and has been served at different times by two Mexican pastors, Rev. Abram Fernandez and Reynaldo Avila. . . .” 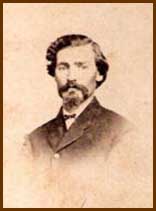 Walter S. Scott, the first person ordained in Texas as an evangelist of the Presbyterian Church in the United States (aka, Southern Presbyterian) to Mexican Americans, was born in Monterrey, Nuevo León, Mexico, on August 6, 1865, to Walter and Mary (Pirie) Scott. The Scotts had moved from Texas to Mexico during the Civil War and raised their son to be bilingual. The family returned to San Antonio in 1878.

Strongly influenced by the evangelical teaching of Melinda Rankin, who at that time was operating a foreign mission station in Monterrey, Scott decided to seek opportunities to fulfill his childhood ambition of missionary service. Although he never completed a formal theological education, the Presbytery of Western Texas ordained him in 1892 as “an evangelist to the Mexican people” because of the exceptional nature of his ministry and his ability to speak Spanish fluently. Using San Antonio as home base, Scott visited small towns in South Texas, where he held revivals and organized churches. Statistics in 1902 showed eleven churches, eleven Sunday schools, twenty-five elders, and 618 communicants in the region. Five years later there were seventeen churches, nearly 1,000 communicants, and four ordained Mexican-American ministers. In 1908 the Synod of Texas (PCUS) approved the formation of the Texas-Mexican Presbytery, which continued to be that denomination’s focal point of Mexican-American missions, until its dissolution in 1955.

However, Scott’s ministry was not without problems. Personality clashes between him and Robert C. Campbell, a fellow missionary leader, led to repeated financial and jurisdictional problems and did considerable damage to the Texas-Mexican Presbytery after 1908. Scott’s personal life also caused him problems. His marriage in 1889 to Mary Case of San Antonio was unhappy despite the birth of three children. His frequent and lengthy trips to South Texas missions led to a separation in 1911 and a bitter divorce in 1916. During his years in the mission field Scott was based in San Marcos (1892-1904), San Antonio (1905-12), Taylor (1914-20), and Waco (1921-37). He organized churches and Sunday schools in Central Texas until the Great Depression curtailed missionary activities. In 1935 the Advanced Field, a missionary jurisdiction established by Scott in Taylor, was absorbed by the Texas-Mexican Presbytery, and Scott became a member of that body. He retired the same year and died in Temple, Texas, on December 7, 1937. Many Mexican-American congregations trace their origins to Scott and his pioneering ministry.

Words to Live By:
God is not hindered by our sin. He can use us for His glory in spite of our shortcomings and failures. That fact gives us no room to be complacent with sin in our lives, but at the same, when all is said and done, the Lord will accomplish His purposes, for His glory. It was a common saying among the Puritans, “Better to suffer the greatest adversity, than to commit the least sin.” Would that all of us, as God’s people, would live our lives in an exceptional way—exceptional for obedience to His Word and exceptional for holiness, mercy and love.

For Further Study:
The records of the Texas-Mexican Presbytery (PCUS), 1861-1954, as well as a small manuscript collection for Rev. Scott are to be found preserved among the Seminary Archives at the Austin Presbyterian Theological Seminary, Austin, Texas.