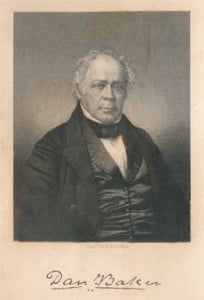 Imagine your mother dying when you were an infant.  Then imagine your father dying when you were only eight years of age.  How difficult your upbringing would be.  In the case of little Daniel Baker, who was born on August 17, 1791, he could only look with sadness at his playmates who had loving parents to watch over them.  But Daniel  had a heavenly Father who watched over  him and was preparing him for great things in the kingdom of God.

Upon graduation, he was interested in enrolling at the Seminary, but instead placed his education under the Rev. William Hill of Winchester, Virginia.  While there was much lacking in this overseership, his self-study in the Westminster Shorter Catechism brought him to the place where the local Presbytery ordained him to the gospel ministry.

One of his greatest blessing was a godly wife in Elizabeth McRobert, who bore him several children as well as helping him in his ministry.  He started his ministry as a pastor, but usually revival broke out under him.  Thousands came to the Lord, not only from the local church, but from those around the church.   He decided to become a full time evangelist.

The last part of his ministry took place in Texas from 1850 on.  There he preached the same gospel, with the same effects.  He died in 1857.

Words to live by:  Before Daniel Baker passed away, he called  his son to make sure that the epigraph on the tombstone read clearly, “Here lies Daniel Baker, Preacher of the gospel, A sinner saved by grace.”  Let us be known in life and death as Sinners saved by grace, God’s grace.

Through the Scriptures: Jeremiah 40 – 42

Through the Standards:  Christian liberty does not exclude obedience to church and state

WCF 20:4
“And because the powers which God has ordained, and the liberty which Christ has purchased, are not intended by God to destroy, but mutually to uphold and preserve one another, they who, upon pretense of Christian liberty, shall oppose any lawful power, or the lawful exercise of it, whether it be civil or ecclesiastical, resist the ordinance of God.  And, for their publishing of such opinions, or maintaining of such practices, as are contrary to the light of nature, or to the known principles of Christianity (whether concerning faith, worship, or conversation), or to the power of godliness; or, such erroneous opinions or practices, as either in their own nature, or in the manner of publishing or maintaining them, are destructive to the external peace and order which Christ has established in the Church, they may lawfully be called to account, and proceeded against by the censures of the church.”