Speaking secondly was Dr. J. Gresham Machen, President of the Independent Board and professor at Westminster Seminary. Using James 1:22 at his text, which states, “But be ye doers of the word, and not hearers only, deceiving your own selves” (KJV), the stalwart of the historic Christian faith, outlined the events which led to this crisis of faith in the Presbyterian Church. 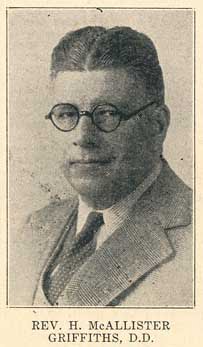 Words to live by: We have the advantage of looking back and seeing history as it unfolded. Attempts to reform the Presbyterian Church from the inside went nowhere as the apostate machine simply suspended, for example, two of the three speakers at that meeting — J. Gresham Machen and H. McAllister Griffiths — from the ministry.  They were joined by a number of faithful ministers who were also kicked out of the church.  So a new church — the Presbyterian Church of America — was formed in 1936 at the last meeting of the Constitutional Covenant Union.

The question is really quite simple, dear reader, if you find yourself in a liberal congregation or denomination. You may think that you are holding them back from moving further away from the Bible. But what influence are they having upon you? Are your biblical convictions becoming less and less important to you. Are your stands for righteousness becoming more and more distant and rare? Pray about this fervently, not only for yourself, but for your family, and then acknowledge the sad truth that it is the liberal church who has left you and who has left the faith given unto the saints. Support a Bible-believing, gospel-preaching, Great Commission-fulfilling church today with your membership.