We come now to the penultimate chapter of Dr. Kerr’s book PRESBYTERIANISM FOR THE PEOPLE. Feel free to offer comments on where we might go next on our Saturday journeys, but keep in mind that short treatments like these are difficult to find, especially when written by Presbyterians!

[penultimate—that’s Greek for “next to the last”]

The distinctive features of this system of theology are three—viz.:

While this system exalts God, it humbles man. It has been the object of many fierce attacks. It has never been popular with the world, yet it has inspired the grandest struggles ever made for the truth and for human liberty. Strong doctrine is required to make strong characters, and strong characters are necessary in the great warfare against sin. What would the Reformation have been without Calvin in Switzerland and Knox in Scotland ? In contending for the doctrines called Calvinistic they worked out the conditions of a civilization grander than any other the world has seen. These doctrines have been called hard, but God made them, and for the salvation of men. We must be brought to feel a sense of our own helplessness; man’s proud spirit must be humbled, and then he is ready to cry out for mercy. The tendency of Calvinistic theology is also to promote the comfort of Christians. When Christians plant their feet upon God’s eternal decree, they may set the world, the flesh and the devil at defiance.

Presbyterians also believe in the freedom of man. We are often treated as if we did not; we are accused of teaching that a man can and must do nothing for his salvation. We are called fatalists. But we do believe in the freedom of man; we preach it; it underlies every proclamation of pardon; it is embodied in every invitation of mercy. How man can be free and God supreme is a question which perhaps Michael could not answer; certainly we cannot. We are not bound to answer it. Our duty is to accept all that God reveals, and to trust him for what is not revealed. He has revealed both these doctrines, but not the reconciliation of them. Our ignorance is the cause of the difficulty. “We know in part ” (1 Cor. xiii. 9).

An illustration may help us to understand, not the difficulty, but where it lies—in our ignorance.

Six hundred and forty years before Christ, Thales discovered that the world was round. He is said to have been at that time the only man who knew this great fact. Suppose he had declared to the people, who were in ignorance, “ I can travel eastward, never turning to the right or left, and, keeping straight on, come back to the point from which I set out.” He might have gone farther and said, “By traveling westward I can return to this place without changing my course.” The people would have answered, “Thales, it is absurd! Your two statements contradict each other; they cannot be reconciled, and we will not believe them.” They supposed the world was flat, and in their ignorance it was indeed impossible for them to understand the two statements of Thales; but they were true, nevertheless. The truth of a thing does not depend upon our ability to comprehend it. If Thales had gone on and told them that the world was round, the difficulty would have vanished at once. Before, they “knew in part.” But Thales’s children would have believed him without explanation, because he was their father. So God’s children must believe him, even when they cannot understand.

The Primitive Baptists reject free agency because they cannot reconcile it with election. Some

Arminians reject election because they cannot reconcile it with free agency. But Presbyterians hold both doctrines, confessing their inability to reconcile them because of the finiteness of human comprehension, yet declaring that it is enough for them to know that both doctrines are taught in God’s word. These doctrines, however difficult, are held by four-fifths of the whole Protestant world. Why? Because “THUS SAITH THE LORD.”

“Verily I say unto you, Whosoever shall not receive the kingdom of God as a little child, shall in no wise enter therein.” (Luke xviii. 17). 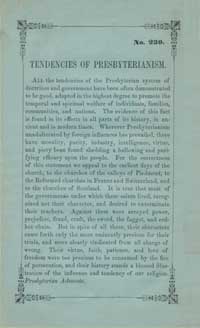 One of our more popular posts, presented here again with a sample of Dr. Gerstner’s writing appended:—

It was a great honor.  Your author was asked to preach the Presbytery sermon at the installation of the Rev. Dr. John Gerstner as an Associate Pastor of Trinity Presbyterian Church in Johnstown, Pennsylvania. The veteran pastor and theologian had just that year of 1990 joined the Presbyterian Church in America as well as the particular presbytery of which I was a member minister. I can remember entering with the other Presbytery ministers into the sanctuary, and there sitting in the front row, in the center seat, was Dr. Gerstner.  A quick thought went through my mind as to what could I say which would edify the people of God, and Dr. Gerstner that evening? But just as quickly came the answer of which Dr. Gerstner in all his ministerial life had exhibited, namely, to preach the Word of God in all of its fullness.

Born in Tampa, Florida in 1914, John Gerstner’s life and ministry would be spent in the northern states.  Graduating from Westminster College, he followed that up with his Master of Divinity degree at Westminster Theological Seminary in 1940. Five years later, he would earn from Harvard University his Ph.D. degree.  Overseas studies in England, Spain, and Switzerland would round out his education for the ministry. 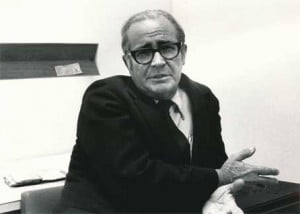 Ordained in the largest Scot-Irish denomination in America, the United Presbyterian Church, he served several churches in Massachusetts and Pennsylvania. But he would make his mark upon the Christian world and especially through those students who were privileged to sit under him at Pittsburgh Theological Seminary for more than 30 years. As an evangelical and Reformed professor in that UPCUSA graduate school, he provided a solid course of instruction for those evangelical and Reformed students who sat under him. One such student was R.C. Sproul.

A careful look into the published works of the Ligionier Study Center will reward you with books and videos all written and spoken by John Gerstner. His primary work would be his three volume book on “The Rational Biblical Theology of Jonathan Edwards.” He became the authority on the life and ministry of this greatest of all American theologians.

This author in two of his five pastorates had Dr. Gerstner as a special weekend speaker. On both occasions, he along with the people of God enjoyed a guest pastor who had an incredible intellect, a great wit, and always a pastoral heart. He entered heaven’s glory on this day, March 24, 1996.

Words to Live By: The apostle Paul in 2 Timothy 2:2 states, “and what you have heard from me in the presence of many witnesses entrust to faithful men who will be able to teach others also.” (ESV)  There are four generations mentioned in this verse: Paul, those who heard him, faithful men, and others also.  It presents the goal of transmitting God’s Word to succeeding generations. John Gerstner accomplished this, as all those given the spiritual gift of teaching, are to aim for it.  Pray for them to faithfully accomplish it.

A Sample from among Dr. Gerstner’s writings:

“The trouble with secularism is the world itself. It always proves to be a mere shadow. Those who are most successful in acquiring it suffer the greatest disillusionment. It is a notorious fact that the wealthiest persons, unless they be truly religious persons, are the most bored, the least happy. They are always piling up but never possessing anything. Their experiences, like the Preacher’s, lead to the dirge: “All is vanity and vexation of spirit under the sun.” Secularists are bent on pleasure, but ‘she that liveth in pleasure is dead while she liveth.’ Animals can eat, drink, and be contented, but man cannot. He cannot be contented without these physical gratifications because he has his animal appetites, but being more than an animal he cannot be content with only them. He cannot live without bread, but neither can he live by bread alone.

“The second cardinal defect in secularism is the loss of the other world which it spurns. Man cannot be happy with this world, nor can he be happy without the other. Even if he disbelieves the other world he cannot escape it. He cannot escape it even now. He cannot be sure that there is not an eternal world. He may disbelieve it, but he cannot, try as he will, disprove it. As Shakespeare has said, he is afraid to ‘shuffle off this mortal coil’ with all its griefs because he does not know what lies ahead. He may have doubts about God, but who has ever demonstrated His nonexistence? How can man satisfy himself that there is no heaven which he may miss nor any hell which he may enter? The slightest possibility of these things—and who can deny their possibility?—utterly unnerves the secularist.

“If there were any satisfaction in the possession of the whole world for a lifetime, how would that compensate for one moment out of heaven or one moment in hell? The merest possibility of the eternal world completely outweighs the utmost certainty of this one. What answer, therefore, can a worldling give to Jesus’ question, ‘What does it profit a man if he gain the whole world and lose his own soul?’ It will not comfort him to reply, ‘But I do not believe you. I do not believe that I, in gaining the whole world, will forfeit my own soul.’ It will not comfort him because he is not sure that he is right, nor certain that Christ is wrong. The mere possibility that Christ’s question about the future is valid ruins his present. ‘To him that hath not shall be taken away even that which he hath’—from him that has not the world to come shall be taken away even this one which he has.”