Many of our readers will know of Dr. Richard B. Gaffin, Jr., who has served so faithfully for so many years as a professor at Westminster Theological Seminary. But you may not know that his parents were missionaries to China, sent out under the auspices of the Independent Board for Presbyterian Foreign Missions. For all the glorious news of the growth of the Church in China in recent years, it is good to remember those who were greatly used of the Lord in plowing the ground, and planting the seed some seventy and eighty years ago. 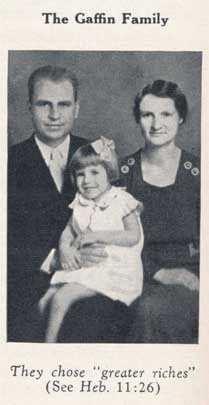 MR. AND MRS. RICHARD B. GAFFIN and their daughter Margaret have just arrived in China. [Ed. – The Gaffin’s son Richard was born about a year after this photograph was taken].

The Presbytery of Milwaukee refused to ordain Mr. Gaffin, a graduate of Westminster Theological Seminary, because he would not pledge allegiance to a missionary program which he could not conscientiously support. He chose to remain unordained rather than to submit his conscience to men. Does that suggest Hebrews 11: 25, 26?

The following extracts from the Gaffins’ letters reveal some of their first impressions upon reaching China:

“In the first place, my reaction to things physical was that of surprise, in that things in Shanghai, Chinkiang, Tenghsien, and Peiping are much better than I had expected, especially the way in which the Presbyterian missionaries live. It appears to me that a great deal of good mission money has been put into expensive foreign houses, which means that money which could have been used for direct evangelization was put into wood and stone; and that for missionaries to live in so distinctly a foreign style has not helped them to get as close to the people as they might. . . .

“In the second place, I was very much distressed to see how strong Modernism is out here. Surely all that Dr. Machen and Mclntire have exposed is all too true and more too. . . .

“In the third place, I was astonished when I learned how much territory there is that is unevangelized up and down the coast of China. I had imagined that we would have to go far inland to find any untouched territory; instead I learn that after all very few of the millions of people in Shantung have been reached, not to mention other provinces.

“We are very happy here and we thank the Lord that He has sent us to this great land. We thank Him that He has given us His assurance at every turn. We thank Him for our health and strength and we pray that we may always be found in Him. We are so happy in our new home, and have met such good people at Mr. Kok’s. . . .”

“I never dreamed of the density of the population nor of the immensity of the unfinished task of evangelizing China.

“Would that we could paint a vivid picture of the need of the gospel to those at home. I am going to try to make all my correspondence prevail to that end. I know that words are incomplete but I pray that the Holy Spirit may add the needed vividness.”

Richard B. Gaffin, Sr. died on February 4, 1996. To read more about his life and ministry, click here to view an historical memoir written by John P. Galbraith (see pages 19-20).

Words to Live By:
There was great sadness when the War forced missionaries to return home from the field. But the God never left the side of His Church in China. Through a great many trials the Church was sifted and purified and now stands stronger than ever. Not ten years before the Gaffins moved onto the mission field, a PCUSA missionary by the name of Henry G.C. Hallock wrote of the tense situation on the field even in 1927, clearly recognizing, almost in a prophetic way, how the Lord was at work despite all appearances:

But amid the deep gloom there appears a bright cloud still. God will overrule it all to His glory—is doing so. The church is being tried as by fire. The true Christians will remain true—will become more “loyal and true—and the dross will be removed. The “rice Christians” and all who are not true will desert and so the church will be refined. The church needs purging and it is being purged “with a vengeance.” And then, too, the scattered loyal Christians, as in the times of the Acts of the Apostles, are preaching the Gospel wherever they flee. The Bolshevists try to beat out the fire; but they only scatter the sparks. The flames spring up in numbers of unthinkable places. The missionaries have had to leave their stations; but it casts their Chinese Christians wholly into the loving arms of the dear Lord where they renew their strength, running and not weary, walking and not faint. Now is the time to bear the Christ­ians up in the arms of prayer as you have never done before.