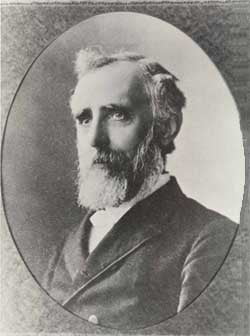 Born at Greensboro, Alabama, January 17, 1836, educated at the famous academy of Professor Henry Tutwiler, in Green County, Alabama, then the University of Alabama, and the University of Mississippi, where he was graduated in 1856, Thomas Dwight Witherspoon had by that time decided to enter the gospel ministry, and took his theological course at the Presbyterian Seminary in Columbia, S.C., where Dr. James Henley Thornwell was the able and distinguished President. While attending Columbia, he fell in love with the seminary president’s eldest daughter, but death took her from him the day before the wedding.

Witherspoon was ordained on May 23, 1860, and installed as the pastor of the Presbyterian Church at Oxford, Mississippi, where he was exerting a very fine influence on the students of the university located there, and might well have considered it his duty to remain with his Church.

But no sooner had the great war between the States begun in April of 1861 than the young preacher promptly enlisted as a private soldier in the Lamar Rifles. But his life’s calling could not be squelched, and it was not long before he was reassigned as chaplain of the Second Mississippi Infantry, and latter attached to the Forty-Second Mississippi Infantry, Davis’ Brigade.  One who knew him well at that time said of Rev. Witherspoon, “that he was one of the most devoted, untiring, self-sacrificing, and efficient chaplains that we had in the army”.

An able and attractive preacher of the soul-saving truths of the gospel, and an untiring worker in the camp, on the march, on the battlefield, and in the hospital, he was ever found at the post of duty, even when that was the outpost of the army or the advance line of battle.

He bore no insignificant part in the labors of those great revivals which reached nearly every brigade, made nearly every camp vocal with God’s praises, and went graciously on until over fifteen thousand of Lee’s veterans had professed faith in Christ and enlisted under the banner of the great “Captain of our salvation.”

In all of these positions he fulfilled the prophecy of his earlier years, won the confidence of his brethren, and wide popularity especially among the young men, exerted a large influence, and was greatly useful. 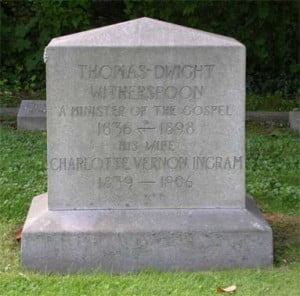 Alas ! I never saw him again.  We missed his genial presence and graceful, effective speech at our reunion, and but three months later we learned that he had closed his labors on earth and gone to receive his reward and wear his “crown of rejoicing.”

Old comrade, colaborer, brother beloved, farewell!  We shall sadly miss thee at our gatherings, but we shall “meet beyond the river,” and meantime we sing with glad acclaim:

Servant of God, well done;
Rest from thy loved employ;
The battle fought, the vic’try won,
Enter thy Master’s joy!

[Freely adapted from an obituary which appeared in The Confederate Veteran, Volume 7 (1899), page 178.]

For Further Study:
The Thomas Dwight Witherspoon Manuscript Collection is preserved at the PCA Historical Center. Details about the collection can be viewed here.