Pastor Witherspoon Goes Off to War 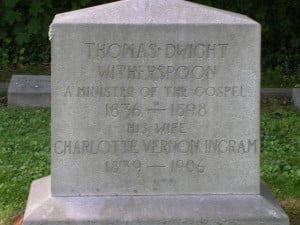 Through the Standards: The third commandment: Sins forbidden

WLC 113 — “What are the sins forbidden in the third commandment?
A. The sins forbidden in the third commandment are, the not using of God’s name as is required; and the abuse of it in an ignorant, vain, irreverent, profane, superstitious or wicked mentioning or otherwise using his titles, attributes, ordinances,or works, by blasphemy, perjury, all sinful cursing, oaths, vows, and lots; violation of our oaths and vows, if lawful and fulfilling, if of things unlawful; murmuring and quarreling at, curious prying into, and misapplying of God’s decrees and providences; misinterpreting, misapplying, or any way perverting the word, or any part of it; to profane jests, curious and unprofitable questions, vain janglings, or the maintaining of false doctrines; abusing it, the creatures, or any thing contained under the name of God, to charms, or sinful lusts and practices; the maligning, scorning, reviling, or any wise opposing of God’s truth, grace, and ways; making profession of religion in hypocrisy, or for sinister ends; being ashamed of it, or a shame to it, by unconformable, unwise, unfruitful, and offensive walking, or backsliding from it.”