What follows provides us with an interesting insight into the process of licensure and ordination for ministerial candidates nearly 300 years ago. Here too, our readers find out where our masthead comes from, namely the source of today’s post: Historical Discourse of the 150th Anniversary of the Upper Octorara Presbyterian Church, by J. Smith Futhey, Esq.

This section appears on pages 42-45 of the above volume:

“The Rev. Adam Boyd, who was the first regular pastor of this Church, was born in Ballymena, county Antrim, Ireland, in 1692, and came to New England as a probationer [in this context, the word means that he was licensed to preach] in 1722 or 1723. While there, he preached at Dedham. After remaining there for a time, he concluded to return to his native country, and was furnished by the celebrated Cotton Mather—who esteemed him well—with a certificate of his good character in this country, dated June 10, 1724. He, however, had formed an attachment to a daughter of Rev. Thomas Craighead, one of the pioneers of the Irish Presbyterians of New England, and, relinquishing his design of returning home, came to Pennsylvania, whither Mr. Craighead and his family had shortly preceded him, bringing with him the commendatory letter of Cotton Mather, as well as credentials from Ireland, and was received under the care of New Castle Presbytery. The following is the minute of Presbytery on the occasion of his reception: “July 29, 1724. The testimonials of Mr. Adam Boyd, preacher of the gospel, lately come from New England, were read and approved, and he being interrogated by the moderator, whether he would submit to this Presbytery, he answered that he would, during his abode in these parts .” Mr. Craighead had been received as a member of Presbytery on January 28, 1723-24. 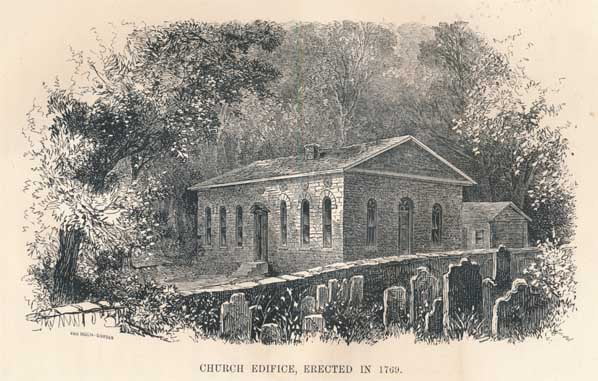 “On the same day on which Mr. Boyd became a member of Presbytery, he was sent as a supply to Octorara, with directions to collect a congregation also at Pequea, and take the necessary steps towards its organization. He was so acceptable to the people that at the next meeting of Presbytery, September 14, 1724, a call was presented for his services as a pastor by Cornelius Rowan and Arthur Park, representatives of the people at Octorara and Pickqua. This call was accepted by him on the 6th of October, and at the urgent request of the commissioners who presented it, that an early day should be fixed for his ordination, the Presbytery met at the “Ackterara Meeting House” on the 13th of October, 1724, for that purpose.

“At this meeting of Presbytery—the first held on this spot—there were present as members, Thomas Craighead, of White Clay creek, George Gillespie, of Head of Christiana, Henry Hook, of Drawyers, Thomas Evans, of Pencader, and Alexander Hutchinson, of Bohemia, ministers, and Peter Bouchelle, elder. Mr. Craighead presided as Moderator.

“Mr. Boyd having passed the usual examination, the minutes of Presbytery record that “Proclamation being made three times by Mr. George Gillespie, at the door of the meeting house of Octorara, that if any person had any thing to object against the ordaining of Mr. Adam Boyd, they should make it known to the Presbytery now sitting, and no objection being made, they proceeded to his ordination, solemnly setting him apart to the work of the ministry, with prayer and imposition of the hands of the Presbytery. Mr. Henry Hook preaching the ordination sermon, and presiding in the work.”

Words to Live By:
To those of our readers who are not ordained teaching elders, the setting aside of qualified men to the office of the ministry in our Presbytery meetings may indeed sound foreign. But in another sense, those who are not ordained and not attenders of your regional Presbytery meetings still have the written record of Holy Scripture, such as 1 Timothy 4:14, where Paul wrote to young pastor Timothy and said, “Do not neglect the spiritual gift within you, which was bestowed on you through prophetic utterance with the laying on of hands by the presbytery.” (NASV)  The laying on of the hands of the presbytery  in our regional meetings have a biblical basis to them! It may indeed be a worthwhile day for you to attend as a layman or laywoman the proceedings of your local Presbytery some Saturday, or whenever they meet during the week. Visitors are welcome. Just talk to your pastor or a ruling elder for information on the next meeting.  It will enable you to pray more for your church, see the work of the Spirit in other nearby churches, and realize anew the biblical basis for being a Presbyterian!